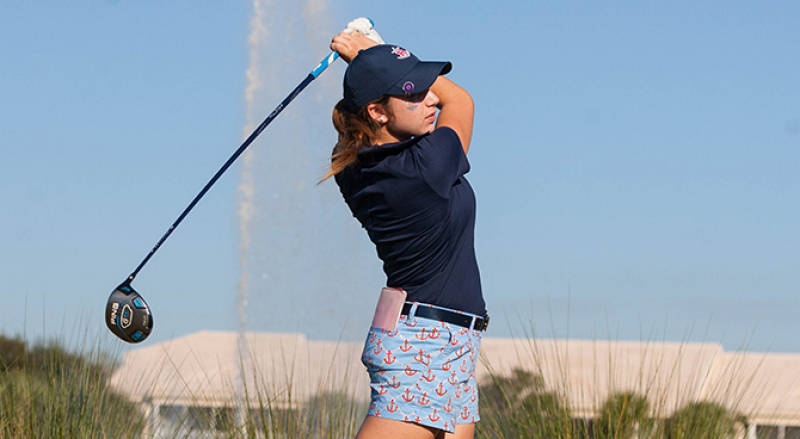 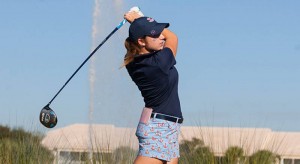 Annie Dulman ’16, member of the Rollins Women’s golf team, earned the unique opportunity to compete in the 115th U.S. Women’s Amateur Championship at Portland Golf Club this summer.
Dulman has been the best NCAA Division II women’s golfer in the country. Dulman, 21, of Palm Beach Gardens, Florida, was the 2013 National Freshman of the Year and Player of the Year, as well as the 2014 National Player of the Year and 2015 Co-National Player of the Year for Rollins College.
The golfer’s experience with the USGA began last summer when she snagged a competitive position as the USGA merchandise intern for the U.S. Open and U.S. Women’s Open at Pinehurst No. 2. Dulman worked on-site for nearly two months, helping set up and maintain the merchandise tent for the historic back-to-back U.S. Open Championships.
Dulman had the opportunity to see both sides of the Championship tournament though interning for the USGA and working closely with USGA Executive Director Mike Davis and USGA President Tom O’Toole Jr., the people who run the operation. She was also able to be on the other side of the rope as a competitor in one of the most prestigious tournaments in women’s golf.
“It was really cool getting to see how it all operates. I didn’t realize how much actually went into it,” she said. “It’s a lot of work, so I really appreciate the experience. As a player, you’re so focused that you don’t really know everything that’s going on to run a championship. It made me further appreciate what the USGA does.”
Coming off the success of a unique and exciting summer performance, Dulman, a senior this year, will kick off the 2015-2016 season as a key competitor on the Rollins women’s golf team.