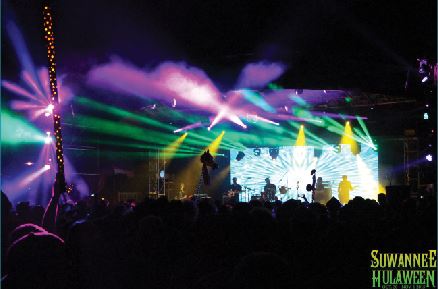 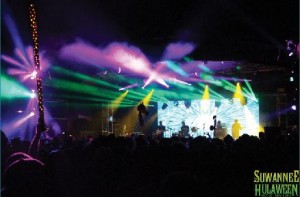 As I think back on my Hulaween experience, one word constantly comes to mind: magical. Although I had been the previous two years, it seemed that the entire festival staff pulled out the big guns this year; everything seemed to be bigger and better. The stage production was outstanding on every level, both audio and visual. Spirit Lake was once again a psychedelic haven among the Live Oaks and Spanish moss. Furthermore, with over 21,000 people in attendance, it was the first Suwannee event to reach capacity. Although Hulaween as a whole was unforgettable, here is a list of five moments from Hulaween that I will remember for the rest of my life:

JRAD simply defies the confines of being a cover band; they just are on another level. Their set felt like a journey back in time to the psychedelic age. Though their entire set was fantastic, I will never forget when guitarist Tommy Hamilton busted out the opening notes of “China Cat Sunflower.” I was walking around dancing and checking out the vendor area when I immediately bolted up to the stage. Those notes would ultimately evolve into an incredible 35+ minutes of nonstop music with “China Cat” into “King Soloman’s Marbles” followed by an astonishing rendition of “Franklin’s Tower” and ultimately “I Know You Rider.” Their set lasted for over two hours and the music never stopped as JRAD pushed the limits of time, space, and the music of the Grateful Dead.

One of the staples at Hulaween is the famed Ferris wheel located near the main stage. As if it was not cool enough to be able to ride a Ferris wheel during the show, my girlfriend and I happened to get on during the song “’Round the Wheel,” one of my favorite Cheese songs. While the band sang about “spinning around the wheel of life,” I quite literally was.

3. Dopapod on the Spirit Lake Stage

To call the set up of Spirit Lake enchanting would be an understatement; that place was an absolute trip! Between the fire-breathing sculptures, aerial dancers, and interactive installations, it was quite an otherworldly experience. Although there were bands playing all weekend, Dopapod’s performance blew me away. True performers in every sense, the audio-visual experience they unleashed was incredible. Guitarist Rob Compa’s performance of “Jack’s Lament” from A Nightmare Before Christmas fit perfectly to welcome Halloween, and Eli Winderman wailed on his Moog all night like a man possessed as he played the keyboard.

2. Stage-Side Mimosas and Merch Giveaways at the Groove Orient

Playing one of their biggest shows to date, the Groove Orient went above and beyond for their Saturday afternoon set. As I boogied down in my sequin jacket and white bell-bottoms, I helped distribute free hats and sunglasses to the crowd. We also released a number of beach balls into the crowd during various peaks throughout the performance. As I promised many people before the show, I made sure to bring some stage-side mimosas as well. That set was certainly one for the record books.

Now, I am not usually one to gush, but I just about melted when Primus to the stage. As I stood in front of thousands of people, making eye contact with Les Claypool, I realized that I achieved a childhood dream. Of course, the entire set was nothing short of awe-inspiring, but those first moments were simply hypnotizing.

With this being my third-straight Hulaween, I really felt humbled to have been able to watch the growth of such a beautiful event. Despite rumors that this was the last Hulaween, there has been confirmation from String Cheese that the festival will be returning next year, and I for one cannot wait to see what is in store for the future. When String Cheese throws a party, you definitely do not want to miss it.