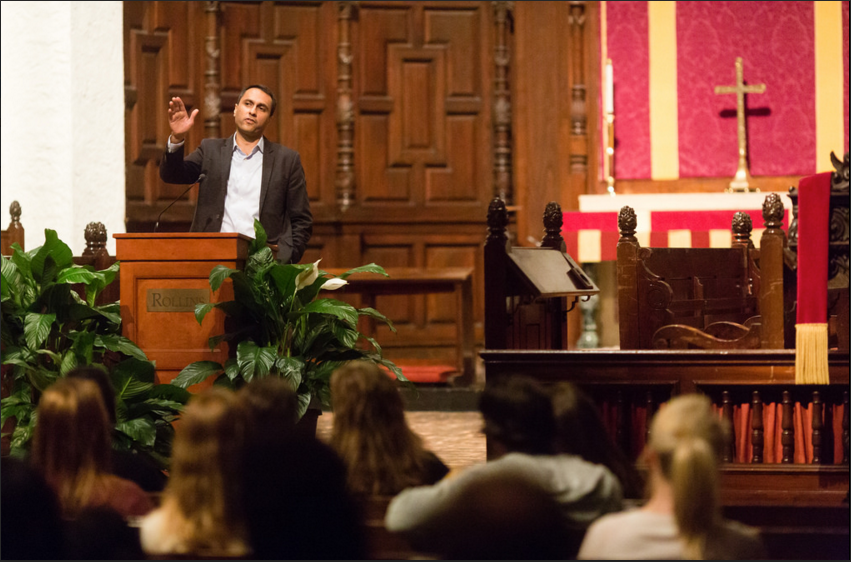 What interfaith can do for rollins

By Eric Hilton on March 17, 2016
This past Wednesday, Eboo Patel, a member of Barack Obama’s inaugural Advisory Council on Faith-Based Neighborhood Partnerships and Thomas P. Johnson Distinguished Scholar, held a discussion at the Knowles Memorial Chapel.
Patel’s talk, called “Sacred Ground: Interfaith Leadership in the 21st Century”, revolved around the role Interfaith groups can play on campus and in the world.
Patel began his discussion with a story revolving around the life of Martin Luther King Jr. and his personal faith journey. Patel revealed how he once asked himself why so many people discuss Dr. Martin Luther King, but never Reverend Dr. Martin Luther King. During his discussion, he explored the role that religion played in Dr. King’s life and investigated the ways that Dr. King displayed his own faith as part of his public identity.
Patel went on to tell an interesting story about the way that Mahatma Gandhi influenced King’s understanding of Christianity. Even though Dr. King and Gandhi both identified with two completely different religions, he explained, Dr. King was still able to change his own perception of what it meant to be non-violent by studying Hinduism.
Patel emphasized that so much of what Dr. King learned and was eventually inspired by came from his close friends with different religious perceptions and backgrounds.
Dr. King’s Christian path intersected with almost all religions. While a devout Baptist minister, he still embraced diversity and allowed himself to be confronted with other points of view in order to better inform his beliefs.
Patel then touched on how religious identity has changed in the 21st century and is becoming s a less-defining factor in most people’s public lives. He stressed that religion is not something that should be feared or kept secret.
Democracy encourages the publication of personal virtues, be they philosophical or religious; Patel made it very clear that religion has been shown to do good, citing the thousands of hospitals and schools in the U.S. that are operated and funded by religious institutions.
Patel closed out his speech by saying that one’s religious identity must be embraced and engaged head on.
“Diversity left unattended moves towards chaos and conflict. It must be engaged,” Patel asserted.