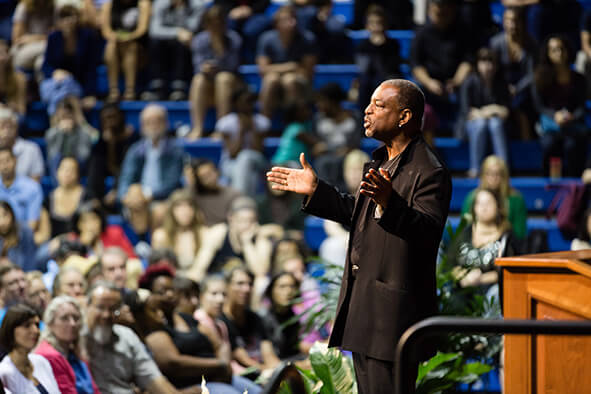 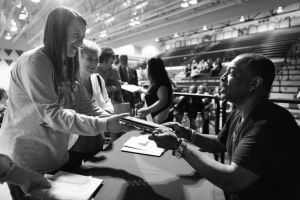 The turnout for literacy advocate LeVar Burton’s presentation last Thursday night was one of the most impressive this year. Students and members of the Winter Park community—parents, children, and long time fans of the actor—filled up the Warden Arena. This event also marked the first time Burton’s father attended one of his lectures. To a standing ovation, LeVar Burton—a writer, producer, director, and advocate best known for his production and hosting of the well-loved and long-running Reading Rainbow (1983-2006)—began his speech “Storytelling: Written, Spoken, Lived.”

In an hour Burton covered various topics such as his memoir, the influence of mentor and Rollins alumnus Mr. Rogers, and his definition of storytelling.
His mother, Erma Jean Burton, forever shaped his life choices; she “didn’t just read in front of [him], but read to [him].”
Her early advocacy for literacy and education influenced the life he would live and the career he would have; in his house, “reading was as essential as breathing,” and “you either read a book or [got] hit with one.”

No matter what, “you were going to have an encounter with the written word in one way or the other.”
For Burton, the importance placed on literature in his early life was no coincidence, “There are no accidents in this universe. There is purpose to everything, especially when we cannot discern what that purpose may be.”

The highlight of the evening came when the audience experienced Burton’s reading of his children’s book The Rhino Who Swallowed a Storm. The children and adults were equally captivated by the recitation; after all, this was the actor who played Lieutenant Commander Geordi la Forge in Star Trek: The Next Generation.
Star Trek’s message of “infinite diversity in infinite combination” influenced Burton even before it skyrocketed his acting career. It was one of the first early representations of racial diversity in pop culture, and as a “young black man growing up in Sacramento, California, in the tumultuous time of the Watergate scandal, the Vietnam War, and the Kennedy assassinations. . .” watching Star Trek was crucial in developing Burton’s “strong personality.” For Burton, the show represented his ideal of a “future where issues of sexism, racism, ageism, and all the -isms, especially capitalism, were resolved.”

The main themes of the night, however, were living “a life of service” and the importance of literacy, education, and imagination.
Science fiction is an especially important genre for Burton, as it “tends to invite us to contemplate the two most powerful words [in our vocabulary]—what if.”
Science fiction and the imagination are at the heart of storytelling. More than that, what we manage to “bring back from the realm of the imagination is the stuff of life.”
Burton also held a student Q&A session on Friday, where he read his children’s book to a group of students from the Childhood Development Center and their parents. This was followed by a student panel and Q&A session.

The Winter Park Institute’s second event of the 2015-2016 season was highly successful; students should definitely mark their calendars for the third event, Notes From All Over: An Evening with Bill Bryson, scheduled for February 22, 2016.