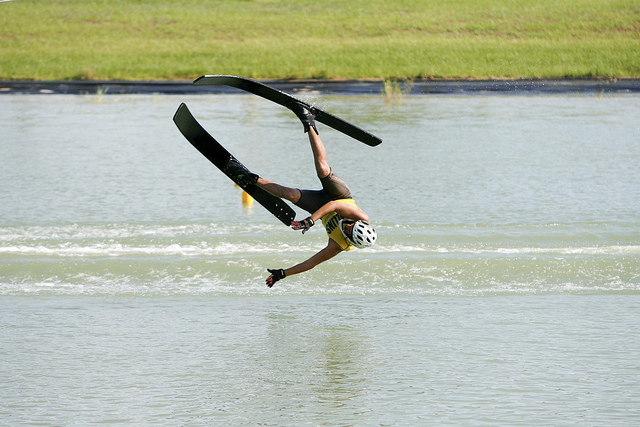 A member of the Rollins Waterski Team was critically injured in a jump accident at last week’s NCWSA Eastern Regional ski tournament in Groveland, Fla.

Josh Briant ’18 was the final skier of the final event when he attempted a jump, improperly hit the ramp, and crashed into the water. Upon impact, he suffered a dislocated knee, fractured tibia, and a collapsed lung.

The seriousness of his injuries required helicopter transport to the Orlando Regional Medical Center. In a Facebook post from Briant’s sister Michale, he reportedly had surgery late Monday night, a chest tube inserted, and a temporary external fixation added to his knee due to extensive swelling.

Briant, an Australian native, has been skiing since he was two years old. A few weeks ago, he competed in Paris, France where he earned silver, making him the second-best trick waterskier in the world.  His hard work and determination as a watersports athlete earned him a sponsorship from Nautique Boats.

Miks Cinis ’18, a friend and teammate of Briant, said,

“This kid is a machine, it has been a big part of his life, he has a big love for the sport, and I am sure that he will be counting down the days until he gets to be back on the water, and we will do anything to help him get there.”

Briant is known for his jump event. Rafael De Osma ’20, also a member of the Rollins waterski team, explained this event: “Basically, you hit a ramp as fast as you can to try to go as far as possible; sometimes you make mistakes that lead to crashes. Normally, crashes result in minor injuries, but Josh got quite unlucky with this one.”

Cinis went on to explain the initial devastation: “When they pulled him out of the water, we were clearly able to tell that he had suffered a pretty bad injury. It was painful to watch him suffer, and I just felt so helpless. It was unbelievable.”

Family and friends have surrounded Briant since the accident. Cinis made it clear that Briant is not alone through his recovery: “This incident has impacted the entire team very heavily. Josh has had a lot of support from the school, athletics, administration, faculty, coach Marc Bedsole, the entire waterski team, his friends from school and fraternity brothers, the entire skiing community outside Rollins, and many, many other people.”

Witnessing a friend or family member go through so much pain is difficult, and Cinis reflected on that, stating, “Moments like this make you understand how helpless you are in life and how an unfortunate event can make you re-assess your priorities.”

However, Briant’s positive character and strength are what will help him recover after this difficult time. Cinis emphasized, “He is already getting more upbeat every hour, joking all the time, so we know that he is very strong and is ready to take on the challenges ahead of him.”