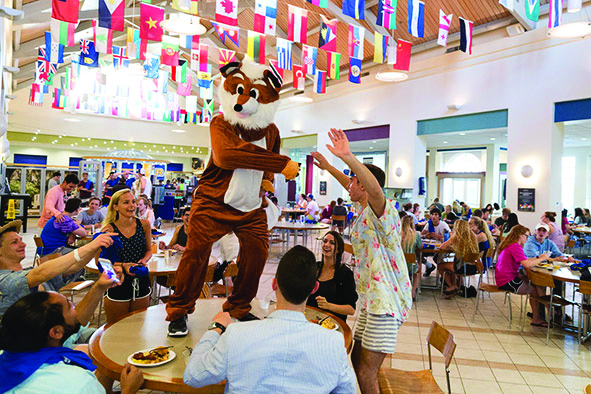 As students revel in the afterglow of spring break and sigh at the thought of finals week looming ahead, one thing is on everyone’s minds: Fox Day. While keeping a lookout for the infamous Fox statue, The Sandspur gathered students’ predictions on the date of Fox Day.

In a poll conducted by The Sandspur, most students foresaw Fox Day occuring in the near—but not too near—future. 26 percent of respondents thought that it will fall on April 11, but April 19 and 24 are also popular candidates.

A hopeful few pray that Fox Day will be as soon as March 29, April 2, April 4, or April 5. One respondent simply stated that they had no idea.

The Sandspur also polled students on what they typically do on Fox Day. Over half of the respondents reported that they go to the beach, a historically popular Fox Day activity.

At 17 percent, the second-most popular activity was sleeping; the third was going to Universal. Perhaps surprisingly, zero respondents reported that they go to Disney World.

One respondent reported a rather unique Fox Day activity: making a sacrifice to Odin to prepare for finals. Whoever you are, we hope it is not a blood sacrifice.

Regardless of what students do for Fox Day, it is a long-standing and cherished tradition.

In January 1934, a fox statue and a cat statue were gifted to Rollins College by Senator Murray Sams.

Then-President Hamilton Holt founded two societies inspired by the statues: the Cat Society for women and the Fox Society for men. Each society consisted of four members that were elected annually by the student body. These four men and women were given exclusive access to touch the fox and cat statues.

To many’s despair in 1949, the cat statue was smashed beyond repair. The fox statue was then placed into storage for safekeeping.

On May 17, 1956, then-President Hugh McKean placed the lonely and grief-stricken fox statue on Mills Lawn and cancelled classes for the day. McKean did not intend for this to be an annual event and discarded the tradition.

However, in 1958, students resurrected Fox Day of their own accord. McKean allowed the students their day of freedom as long as they agreed to return to campus in the evening for a picnic and a choir performance in Knowles Chapel. Thus was the beginning of Fox Day.

However, not every president cooperated with the tradition of Fox Day. When President Jack Critchfield came to Rollins, he decided to discontinue the tradition and returned the fox statue to Hugh McKean.

A few years later, in hopes of reviving the tradition, seven students created their own replica of the fox statue. In the early morning hours of May 3, 1976, the students placed their creation on Mills Lawn, thus creating their own fake Fox Day. Classes were not officially cancelled, but of course that did not prevent students from sneaking away for a day at the beach.

The original fox statue was returned in 1979 thanks to then-President Thaddeus Seymour. Thus, the official Fox Day tradition was reinstated and continues on to this day.

As is clear from its long history, Fox Day is vital to the creation and cultivation of the Rollins community. This was expressed by President Grant Cornwell, who stated, “Traditions create community. One of the great things about Fox Day is that it is an annual tradition that binds current students with generations of Rollins alumni. It is a moment when we all take a time out and simply appreciate how fortunate we are to be part of the Rollins community.”

As we all wait with bated breath for this year’s Fox Day, we remember all the generations of Rollins students who have longed and fought for the same beloved day of freedom.