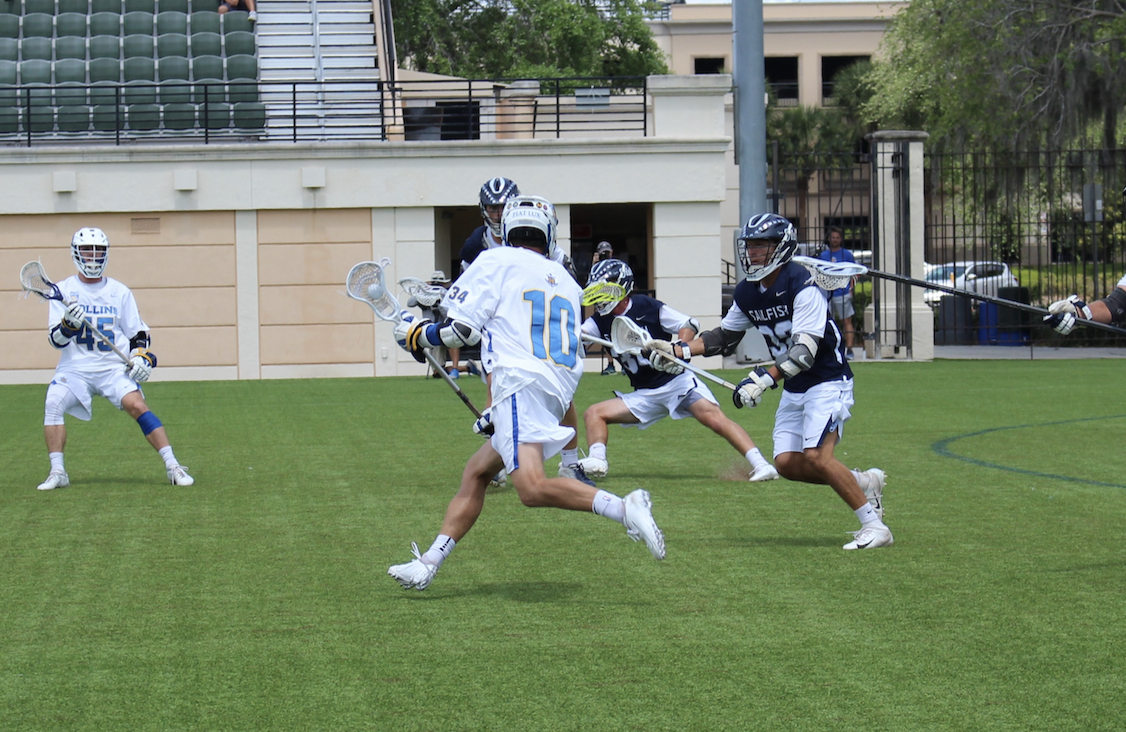 A senior season for the books

Greg Taicher graduates from Rollins in less than a month, but his legacy on the men’s lacrosse team has been established for all time.

This is true not only because of his four goals and one assist on last Saturday’s Senior Day, but because after the Tars’ win against Florida Southern on April 6, Taicher became the program’s all-time leader in points, goals, and assists.

“I am surrounded by a great group of guys and have had such a great support network over the years, especially at Rollins,” said a much-appreciative Taicher.

“I owe it all to my coaches and great teammates who have put me in a place to succeed.”

Taicher also acknowledged his current cohort as “the most talented and hard-working group of guys” he has ever played with at Rollins.

Despite the satisfaction that comes with being individually recognized, he is more concerned with the team’s outcomes: “We have had one overtime loss and three other one-goal losses, which has been tough, but it shows that we are right there with every opponent.”

Men’s lacrosse started this season well with a strong 6-1 record, but consecutive narrow defeats against Florida Tech and Lynn posed the risk of irreparable damage to the season.

Stunningly, though, the Tars clinched a heroic 11-10 win against No. 14 Saint Leo, the winning goal coming with 15 seconds left on the clock. For Taicher, it was one of the highlights of his career: “It really turned our season around, beating one of the best teams in our conference.”

Taicher scored that day, but it was the team effort that made it monumental. “Numerous guys contributed and it was just great to be a part of, especially winning the game in those waning moments. I live for big team wins like that,” said Taicher.

In Taicher’s freshman year, Rollins reached the conference tournament for the first time ever. Unfortunately, disaster struck as Taicher had to sit out the post season due to a torn labrum in his hip.

However, after intensive rehab, Taicher came back for sophomore season and was unstoppable. A regular starter, he registered nearly five times the amount of points he had recorded the previous year, tallying six times as many goals and three times as many assists.

As his time at Rollins runs out, he described his feelings as bittersweet. He considers his time with the Tars as the best four years of his life. “I’ve met so many great guys and have shared so many memories, both good and bad. It’s been an honor to play for Rollins College,” he said.

He said his 16 years of playing lacrosse have taught him a lot. “While I may pursue playing some lacrosse after college, I think that it has put me in a great place to succeed beyond college.” The Communication Studies major plans to pursue a career in business.

Taicher urged the upcoming generations of lacrosse players to carry on the tradition of excellence that has started to take shape: “It was a different program four years ago, and it has been really cool to see how we have become a strong program in the SSC.” He calls for work ethic both on and off the field, considering it “a testament to the kinds of guys that are coming through this school, upstanding and good citizens.”

Life provides motivation for him in many ways, some of which go beyond sport. Taicher remembered Will Hauver #34, a senior captain who passed away in 2015 due to complications with type-one diabetes and the flu.

“He was such a great role model, leader, and teammate. He has left a lasting legacy that I hope future generations of Tars will carry on, especially in his memory.”

As he looks to the future, in the hopes that Rollins will capitalize on the last two games of regular season to gain the upper hand in the playoffs, the goal he sets for the team is simple: “Just keep winning.” Greg Taicher knows what he is fighting for.