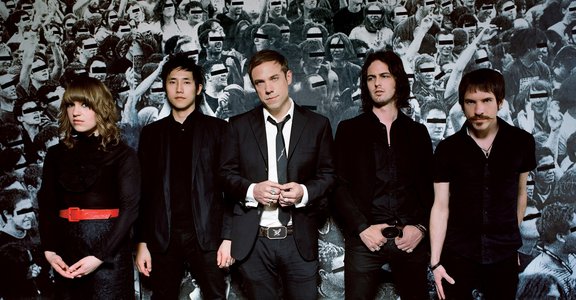 With their latest album Dope Machines, The Airborne Toxic Event sheds its alterna-rock skin and undergoes a musical metamorphosis, resulting in a surprising and exquisite synth-pop sound.

Upon first listen, the album may taste bitter to fans and familiars of the band’s traditional work. Machines, however, still manages to succeed as a synth-pop record, despite veering from past works, such as 2013’s Such Hot Blood, or their 2008 self-titled debut.

Almost a decade since the release of Airborne Toxic Event, the band has moved with the waters of musical trends and sailed into unfamiliar territories.

Of course, one may question whether The Airborne Toxic Event is ‘selling out’ by crossing into the category of a more ‘popular’ genre.

True, Airborne has changed since 2008, but so has music. With time’s passing, a band has to tweak its sound or face the possibility of becoming stale and predictable. Dope Machines showcases The Airborne Toxic Event’s musical versatility while still managing to boast their unique, signature strengths.

Like past albums, Dope Machines’ lyrical content functions like poetry, projecting vivid storylines and imagery through the words, music, and vocal emotion–not surprising, taking into account that lead singer and band founder Mikel Jollett started off with writing poetry and prose.

Most of the tracks incorporate the band’s signature instrument—the viola, played by backing vocalist/keyboardist Anna Bullbrook. Like past works, the grittiness of Jollett’s voice complements the suave sounds of the instruments—from viola to piano.

The supplement of the synthesizer does anything but break up the perfect pairing. Although machine-made sounds dominate the tracks, the effects still fit with the lyrics and vocals. In “One Time Thing,” Jollett croons, “Feels like my head is made of moonshine and cheap-ass wine” to the silvery pangs of synths, implementing a gruff, yet crisp flavor that remains throughout the song.

Other standouts include “Time to be a Man,” one of the album’s strongest tracks. The song commences with a carnival-esque ringing, reminiscent of the electronic tone pools heard in boardwalk penny arcades. Starting off childlike and nostalgic, the song winds into a mature rush of electric guitars, synth notes, and drumbeats.

The electricity of sound is accompanied by lyrics such as, “It’s time to be a man. Tell me, how does that go? What the hell are you waiting for? The world’s an open door?”

Through its combination of music and lyrics, the track strives to find sense and happiness in adulthood.

While most of Dope Machines succeeds in its incorporation of pop sound, some tracks, such as the lead single “Wrong,” seem to overwhelm vocals with their electronic effects.

Overall, however, The Airborne Toxic Event succeeds in their attempt at a more pop-based album. Dope Machines is strong in composition and manages to incorporate the band’s standout traits into a world of synthesizer and electronics.

Rating the record, Machines would garner a 3/5. It is a stellar first attempt at an unfamiliar genre—and for those fans unhappy with Airborne’s new style, the band released an all-acoustic sequel one day after Machine’s debut to balance the musical scales.