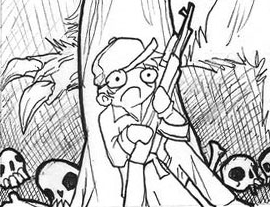 Are Gun Rights Out of Control?

Personally, I don’t know what I’d do without my AR-15. It’s gotten me out of a variety of tricky situations, like that one time when I caught a group of fifteen burglars from the CIA trying to steal my sofa. Or that other time when I shot at a deer, and it shot back at me.
Oh wait, that’s insane.

People don’t need such high-powered weapons in order to protect themselves. Anyone who tells you otherwise has a corporate agenda, has been brainwashed in the NRA’s secret holding chambers off the coast of Alaska or has a weird fetish for shooting off an AR-15 into the American sunset.
Although the NRA is correct in saying that the majority of guns are used safely, it’s also true that guns are more likely to cause harm than prevent it. A 2010 study in the Southern Medical Journal found that a gun is 12 times more likely to result in the death of a family member or guest instead of an intruder. Furthermore, Harvard public health specialist David Hemenway said that having a gun in the house increases the risk of suicide in that house by two to four times.

President Obama initiated 23 executive orders last week designed to help lower rates of gun violence. But some of these orders sound vague, such as launching a national dialogue on mental health or improving incentives for states to share information with the background check system. As Obama has said, Congress must act if real change is to be made.

Obama wants Congress to do three things: require background checks for anyone who buys a gun, reinstate the ban on military-style assault weapons and limit ammunition magazines to 10 rounds and place Todd Jones as the director of the Bureau of Alcohol, Tobacco, Firearms and Explosives. Congress has not elected an ATF director in six years, and Obama thinks that doing so would allow the organization to be more effective in helping law enforcement combat gun violence. Note that there is no mention of taking away all guns from American citizens, as some conservatives would like to have you believe.

Unfortunately, there still exists a large amount of opposition to these plans. The majority of Republicans, as well as a minority of Democrats, have traditionally voted against new gun legislation, not to mention the suffocating influence of NRA lobbyists. Somehow, finding ways to decrease gun deaths just doesn’t seem to be worth the effort in the minds of some people, even after the Newtown tragedy.

According to Slate.com, at least 1,305 gun deaths have occurred in America since Newtown. Slate’s article, “How Many People Have Been Killed By Guns Since Newtown?” gives the name, location, gender and age of the reported gun victims. Such gun deaths could happen anywhere, even on college campuses like Rollins. Just over a week ago, right after I wrote the first draft of this article, a shooting occurred at a Texas community college, leaving three wounded.

Obama’s proposals on gun violence will by no means solve America’s shooting problem overnight, but they are steps on the right path to decreasing gun violence rates, and they’re a whole lot better than doing nothing. Even if gun deaths were reduced by only a quarter, approximately 7,500 lives would be saved each year. And that, indeed, seems to be worth it.

The Second Amendment of the United States Constitution states that it is the right of Americans to own firearms. “A well regulated militia, being
necessary to the security of a free state, the right of the people to keep and bear arms, shall not be infringed.” The purpose of the Second Amendment was not for hunting or sport shooting, but rather it was intended so that the American people could protect themselves from a tyrannical government.

The Second Amendment along with the other amendments in the Bill of Rights was created to limit what the federal government could do to the American people. While some will argue that the word militia only applies to the National Guard, the Militia Act of 1796 required all able-bodied men to own a military rifle so they would have it at the ready in case they were called upon. It was intended for defense.

More gun restrictions do not lead to less crime. According to the Federal Bureau of Investigation Criminal Justice Information Services Division, the Washington D.C. handgun ban had no such affect. During the years in which the D.C. handgun ban and trigger lock law was in effect (1976-2008), the Washington, D.C. murder rate averaged 73% higher than it was at the outset of the law, while the U.S. murder rate averaged 11% lower.
There are no more violent crimes in states that have concealed carry laws for guns, as opposed to those that do. Taking firearms out of the hands of law-abiding citizens makes them targets and victims of criminals that would have firearms whether the government allows them to or not.

CNN.com reported a story dealing with a criminal breaking into a home in Loganville, Ga., two weeks ago. While on the phone with her husband and 911, Melinda Herman hid with her two children from the intruder behind several locked doors. Once the criminal broke through the last door, Herman was able to fire 5 out of 6 shots from her .38 revolver into the assailant. Even after five shots, the intruder was still able to flee. If Herman had not had a gun and knowledge of how to properly use it for self-defense, she and her two children would be dead. Herman could have waited minutes for the police to arrive, but when seconds mattered in a life or death situation, she was able to protect her family.

Gun restrictions only hurt law-abiding citizens. Criminals will obtain and carry firearms regardless of the cost. Someone who was intent on doing harm to innocent people like the shooter at Sandy Hook Elementary would commit violence no matter what restrictions on guns there might have been. Perhaps the focus of reform should not be with guns, but rather mental health. Over the last few years, many state run mental hospitals have been closed. When the hospital where my mother worked in New Jersey closed, hundreds of patients had nowhere to go. Within a month, several died due to receiving insufficient care from nursing homes or wherever they were displaced. Despite popular beliefs, guns are not bad. A gun in the hand of a bad man is a very dangerous thing. A gun in the hand of a good man is only a threat to the bad man. Good law-abiding Americans should have the right to defend themselves using firearms. The federal government has no business trying to restrict this freedom. That is the reason the United States has a Bill of Rights.

Listen to two members of The Sandspur team Greg Golden and Amir Sadeh discuss gun control on The Sandspur Hour, their weekly WPRK radio show, below: