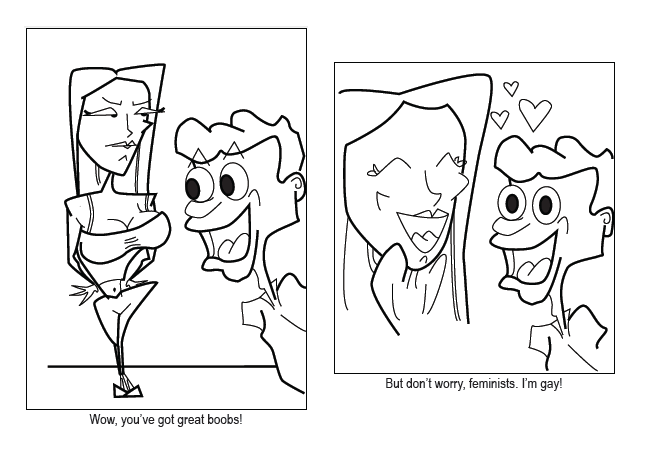 I do not often go to gay clubs. There are many reasons why, ranging from introversion to the fact that it is just not my scene. One thing that astonishes me whenever I go to gay clubs is that while there are straight girls galore, I cannot count the number of lesbians there are with one hand. Why?

As a community, we need to work together, grow together, and have fun together. But, why would any lesbian woman want to enter the pit of misogyny that is a gay club? You have gay men grabbing their straight girlfriends’ bodies, grimacing at the mere mention of vagina, and calling people sluts without hesitation. That is not a friendly space for women. If I were to go out and listen to people talk about how penises are disgusting and grabbing me I would not want to be there either. It creates a gendered and hostile environment.

When I was first coming out, I thought that I had the permission to grab a woman’s breasts or ass because I was not attracted to them. “It’s okay,” I thought, “I don’t like vagina, so it means nothing if I do this.” But, it does. This is male privilege. The ability to grab a woman, in whatever manner we would like without consequence, is the epitome of male privilege. This also objectifies women, and, personally, I think this is the worst form of objectification. When a gay man uses his lack of attraction as an excuse to be able to grab a woman’s body, it says that women are just objects—there solely for our entertainment. It is not attraction that drives us to touch you, but it is the entertainment value of grabbing a woman. It says: “I may not want to have sex with you, but I own your body.”

What makes this objectification an even bigger problem is that it reinforces rape culture. While sexually assaulting a woman may not be your intent, (1) that is what you are doing (it is called forced fondling) and (2) the objectification of women reinforces the idea of male ownership of women’s bodies.

It says that we can do what we want, when we want, and women do not have a say. It is a reflection of the gender dynamics we see in rape situations. A man sees a woman he wants, he does not get a yes, and he has non-consensual sex with her anyway. Whether it is a date rape or a hidden attacker, the central theme is that we, as   men, own women’s bodies. Why would you want to reinforce that?

So again, to the women of the world, I apologize. To the gay men reading this I say, challenge your behaviors. Go against this current of misogyny that we see within the gay culture. Think before you grab. Ask yourself if you are making the women in the room uncomfortable. Check your privilege. Just because you are gay does not mean that male privilege does not apply to you.