Over a dozen female-identifying Rollins students put on their favorite pair of pajamas to attend the “Better Than Sex PJ Party” on Tuesday, October 18. This number is excluding our feline friend Sophie, spotted perched outside Chase Hall and who received a lot of affection from the incoming students. The Lucy Cross Center, Wellness Center, and Planned Parenthood came together to hold an informational question and answer session all about sexual health. Students were delighted at the scrumptious hot chocolate with marshmallows, cookies, popcorn, and brownies served. Whether they stayed for a shorter period or the entire event based on their schedules, in true collegiate fashion, everyone made sure to partake in the desserts.

Once everyone was properly nourished, the meeting began with the Planned Parenthood representative explaining her experience with the company. She started working with the program when she was our age to help pay college tuition bills and has stayed with the 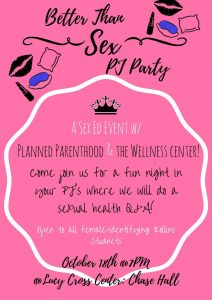 company ever since. Planned Parenthood just celebrated 100 years of health service last Sunday, October 16. Though it is their focus, sexual health education is only one aspect of their work; they have provided health services to over 42,000 men and teens in 22 countries and over 9,500 lifesaving cancer screenings.

Before getting to the questions, the representative asked us one: When do you think people should be educated on these topics? Students responded with a range of ages, but she said that it could start as early as when toddlers started naming parts of the body, like the eyes or toes. Addressing middle areas of the body instead of shying away from them can reduce negative feelings about them and introduce lessons on respect that would carry throughout their lives. She then transitioned to answering questions from the group as well as anonymous questions submitted online, which ranged from which lube is safe to use (water, not oil, based is best), using male and female condoms, what sexual activities are safest, and types of birth control. She was extremely knowledgeable and was able to answer any question asked.

An hour into the event, two Wellness Center employees, Wendy Kimelman and Sharon Darin, joined the conversation. They stressed that the best contraceptive is the one with which you are consistent. The point was brought up that one should check the condom’s packaging, expiration date, and appearance before using and to always have more than one in case the first will not be effective or if partners switch between sexual activities. They should also be kept out of sunlight; storing them in one’s wallet is not advised, although an inside zipper pocket of a purse should prove effective. In any case, check first for any punctures or signs of wear or aging. They also discussed the importance of starting communication with parental figures so the first time you talk to them about more sensitive subjects or ask for their support is not in a crisis situation.

The spread of STDs/STIs were addressed as well; this is one reason why it is important to use a condom. While bacteria-based can be treated to eventually be cured, virus-based (such as herpes) can only be treated for symptoms. This is why the representative recommends both partners being tested before having intercourse. The Wellness Center will be holding clinical STI tests free with your R-card on Oct. 25.

A student jokingly proposed why Plan B is so expensive. This prompted a short discussion about how products to promote women’s sexual health are often costlier than need be. The Planned Parenthood representative also added that Plan B should only be taken in emergency situations, not as a regularly used contraceptive, because of the large amounts of hormones it employs.

Overall, the event was a success. Planned Parenthood, Lucy Cross, and the Wellness Center made it possible for every woman in attendance to learn a lot of information in a short period of time on topics that are often considered too awkward to talk about. “I thoroughly enjoyed it,” voiced Addie Cursey ’20. Additionally, this first PJ party laid the foundation for similar male-identifying and LGBTQ+ student events promised to come later in the year.