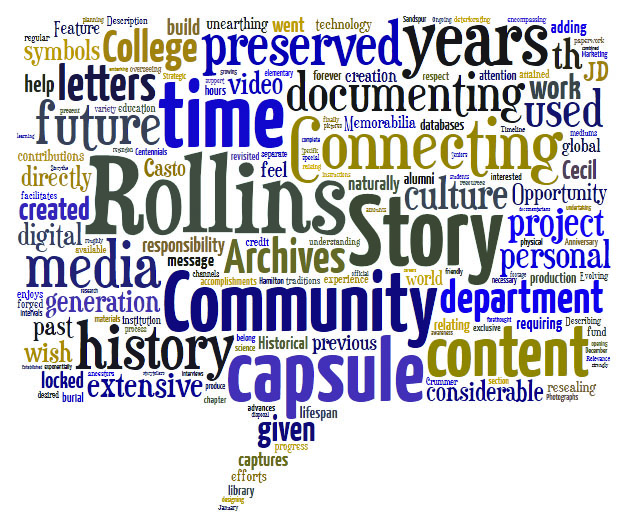 The 125th anniversary of Rollins was celebrated last year, but this year we will have the opportunity to celebrate the beginning of a new tradition: a Rollins time capsule. The main component within the buried capsule will be an external hard drive housing videos submitted by the Rollins community. The accompanying documentary “Rollins Story: Connecting to the Future” will highlight the happenings of this academic year, not unlike a video yearbook.

The time capsule is the brainchild of Cecil Mack ‘08HH ‘12MAT and J.D. Casto ’11, who are now working alongside Director of Special Projects Trish Moser with support from the Office of the President to see the project into fruition.
“The administration and campus organizations are behind the idea of a time capsule 100 percent. We are hoping that the students get excited about this project as much as Cecil and I are,” said Casto.

The capsule will be buried on graduation weekend in Tars Plaza, the new sighting spot for the fox at the north end of Mills Lawn where the flagpole stands, and will not be opened for 25 years’ time, until the 150th anniversary of Rollins, when there will be a one-year collection period before the time capsule’s reburial.

Mack explained the capsule efforts are a way to be intentional about making memories that can leave a legacy. “Like many people on campus, we never realized that people living right now can be a part of the ongoing story at Rollins College, and if not us to start a tradition then who will?” he said.

The first open opportunity for individuals to contribute their personal Rollins stories to the time capsule is slated to be sometime during Reunion, March 23-25, with more details to come. Individuals’ videos are meant to be messages to their future selves about their favorite Rollins memories and predicting where they, the world and Rollins will be in 25 years.  A similarly focused question will serve as a prompt for a time capsule writing contest. Updates regarding the time capsule will be available via The Sandspur Facebook page and website or the Traditions page.