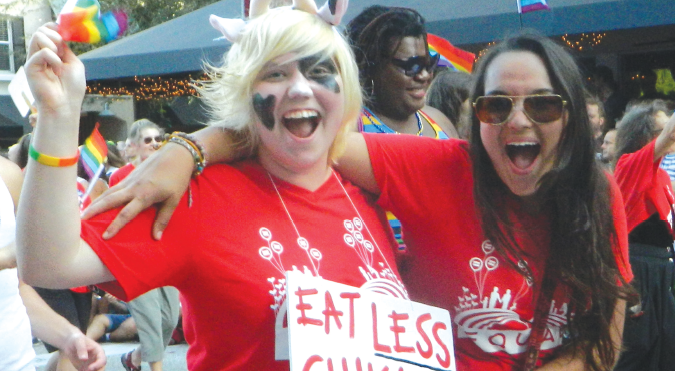 The LGBT community at Rollins may be a minority, but is welcomed with acceptance and encouragement.  Students of all sexual orientations feel that their student and sexual identities are compatible.

For nine consecutive years, Rollins College has proudly clenched U.S. World and News’ coveted title as the “No.1 Regional University in the South.” This Spanish moss encrusted campus location befuddles many a Tar-ignorant inquisitor and it’s not uncommon for the unfamiliar to flop tremendously in his or her efforts to pinpoint Rollins on a mental map.

“Rollins College – that’s near Flagstaff, right?” No, lady—we’re nowhere near Arizona, but your willpowered supposition is much appreciated.

However, in terms of annoyance, lopsided conjectures regarding our college community overshadow the typical (and somewhat innocent) locational guesswork.

“Oh, of course I know Rollins! The Koalas, right? I hear your football team killed it this year!” Sometimes, in situations such as this, it’s best to just nod and feign a cheap smile.

A lack of Rollins knowledge doesn’t solely restrict itself to far off states – many Floridians also draw a blank when the college tumbles into conversation. With that said, however, Rollins has rung its brassy bells loud enough for the greater Orlando area to hear. And often times, what they hear takes form negatively.

According to local stereotype, Rollins students are primarily white, exceptionally belligerent, snotty, condescending, and of course, dripping in daddy’s diamonds. Now, I refuse to argue that this conjured image lacks any substantial basis —many a pretty, blonde Tar-ette sashay their way to the 10 a.m. Quantitative Reasoning class, toting their Michael Kors, their Jimmy Choo’s clicking on campus pavement. And of course, Rollins wouldn’t be Rollins twithout drunken herds of meagerly tanned, vineyard-whale imprinted frat boys. Yes, each of these archetypical personifications reflects the assumptions of local lore. However, are these Lacoste-slathered, ivory-skinned “rich kids” the only cog of the Rollins machine?

While it’s safe to say that Rollins is no EPCOT in terms of human variety, it does possess seedlings of diversity. Five doppelgängers of preppy Rollins jock #43 may inflate a classroom; however, behind him sits a “Hot Topic-esque” girl and a quiet, lanky boy decorated in New Balance sneakers and a Kohl’s-bought Assassin’s Creed t-shirt.

In addition to the cafeteria labels assigned to describe style and musical tastes, Rollins does include reasonable clumps of students from an assortment of cultures and ethnic backgrounds—not just the presumed white. Unfortunately, however, the presence of the “typical Rollins student” really does outweigh any budding minority group, especially in regards to one of the smallest, most controversial sects of all: the LGBT community.

Be it through nonchalant acknowledgment and affirmation, or the confidential nervous whisper on a smoke shrouded Rollins dock, a small sliver of the student body—myself included—identifies as either lesbian, gay, bisexual, or transgender. As “shocking” as it may seem, the community spans throughout various social pockets on campus (not just the flashy, Sondheim-screeching theater world). LGBT students exist in sororities, fraternities, sports teams, and every academic major in between.

However, most gay and lesbian students choose not to constantly broadcast their sexual preference in order to avoid labels and prefer recognition for their whole self in lieu of which gender’s genitalia they find most engaging.

“I am not a gay Rollins student. I am a Rollins student who happens to be gay,” says Zack Uliasz, ‘15. “I make this distinction because for me, being “openly gay” is just being my normal self. In that sense, I am lucky because I have never, at Rollins, been made to feel self-conscious of who I am.”

For the most part, the fear of social acceptance and peer disdain bypasses the thoughts of out and proud students. Instead, the majority refuses to loudly parade their sexuality in order to avoid the personality stripping “gay kid” and “lesbo” labels.

Tierney Torchin, ‘16 proves expert on this topic. Last spring, the current sophomore organized a series of interviews with LGBT students on the subject of gay stereotyping and labeling. This miniature documentary crept onto the Rollins Facebook stratosphere and presented the issue to a variety of uninformed audiences respectful of the gay community overall; however, there are still expectations of how members of the LGBT community should act,” Torchin says in regards to the information she learned from her interviews. “Stereotypes are still extremely prevalent, even among allies and others who support the cause overall. I can see that we’re on a progressive campus and that people are trying to be responsive to the times, but we still are expecting gay boys to be our best friends and lesbians to have deep voices. The campus is definitely supportive and is trying really hard to show it, but seems to still have some out-dated ideas stuck in their heads.”

Although Rollins seems more open to homosexuality than a mosh pit at a Lady Gaga concert, the school is not completely void of the occasional, ignorance-wielding bigot. “I would say Rollins is very open. Of course, there are homophobic assholes, as they exist all over the world,” says Breanna Rack, ‘15.

Thankfully, homophobia hasn’t cascaded upon Rollins as extremely as it has at other American colleges.

“I haven’t experienced anything directly homophobic with the exception of my first week at Rollins when I wasn’t even out and a girl said, ‘I don’t believe in gay people.’ Whatever that means,” says Sabrina Kent, ‘16, the president of Spectrum, Rollins’ LGBT alliance.

Only once have I experienced ignorant absurdity at Rollins when it was implied that my sexuality correlated to “God testing my religious devotion.” This brand of commentary is inevitable and minor in comparison to the daily persecution other LGBT college students endure. 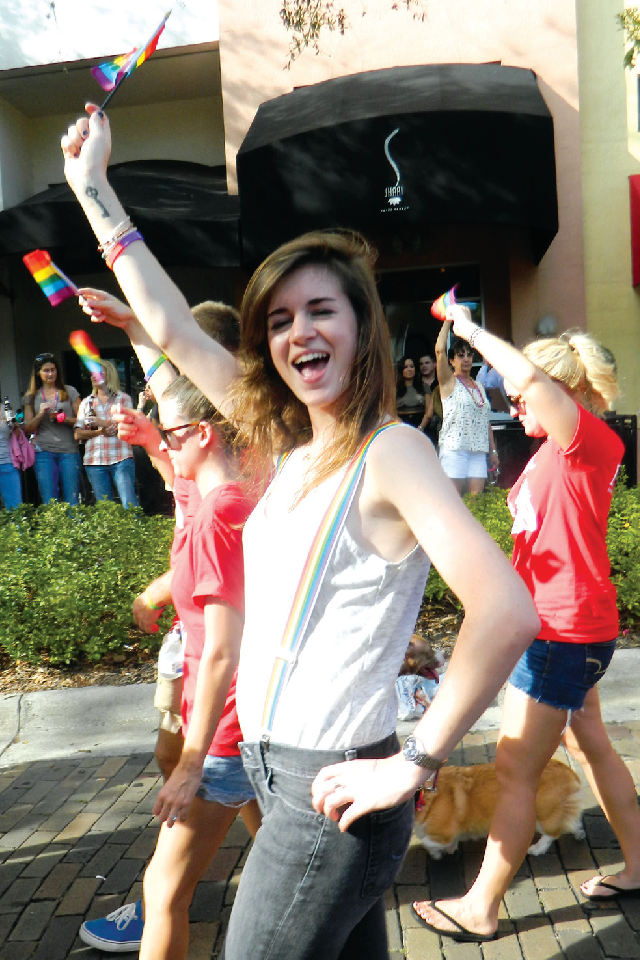 Uliasz says, “Rollins is surprisingly open and accepting. Being any form of minority at a tiny school immediately makes you a hyper-minority; however, I have found Rollins to be a very safe place to be. Certain factions of this school have shown themselves to be disappointingly less progressive, but on the whole, Rollins is a good role model for acceptance and understanding.”

For the most part, gays and lesbians are welcomed with open arms and solo cups filled with generic fruit punch and cheap vodka by straight men and women alike.

“It’s a lot easier to take your sexual orientation out of the picture when it comes to holding conversation with people anonymous with your sexuality. And if their interests and hobbies are different from mine, it’s easy to just ask and find out more about them. I really don’t see sexual orientation as a barrier in terms of conversing with other people,” says Daniel Marinez, ‘16, in response to the idea of entering a frat party as an openly gay man.

“I have never felt discriminated against because of my sexual orientation. People who really know you, don’t really care if you are gay or straight because they realize it really doesn’t affect them whatsoever,” says Rack.

The welcoming environment that Rollins provides projects a level of comfort that allows many a closeted individual to proudly embrace their orientation.

“Before coming to Rollins, I was very much in the closet. Aside from a few of my friends, no one knew that I had dated girls. Coming to Rollins was such an eye opening experience for me because I met real-life lesbians, instead of just the other closeted girl that I dated and made out with in my high school bathroom” says Rack.

College has always presented the proper environment for embracing and delving into one’s previously unspoken and unacknowledged sexual orientation. As the winter months encroach, a vast majority of LGBT babies (or “gaybies”) sprout and scurry into the gaping homosexual mecca that is Orlando. Something about the right climate helps foster this great “Winter Exodus.” The warm atmosphere has inspired many a closeted gay freshmen to sprint out of the brisk depths of Narnia, fling open the closet door, and immediately download Grindr onto his/her smartphone.

Rollins College may not be perfect in terms of diversity. It’s oversaturated with many Starbucks guzzling snobs. However, it is welcoming to anyone of any sexual preference. The warmth of the student body entwined with that of the Florida sun provides an oasis for so many students who may have once thought of themselves as “different,” “strange,” or even “tested by God.”

However, the wise words of Alana Thompson—better known as Honey Boo Boo—resonate well with the overarching stance of the Rollins student body in regards to the gay community: “Ain’t nothin’ wrong with bein’ a little gay, everybody’s a little bit gay.” I’ll take a rain check on that last part, Alana. And by rain check, I mean I’ll keep my eyes peeled for new faces sporting Tar tanks at Pulse this December.