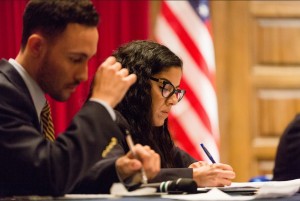 llege Debate Team has become a feature at Rollins. Since its inauguration in 2007, the team has consistently finished in the top 10 of the National Parliamentary Debate

Dr. Eric Smaw, who started the team. “Teams from all over the country compete in local and regional competitions in order to qualify and prepare for national competition.”

The Debate Team’s achievements are no small feat, and Smaw expects a steady commitment from all members. Parliamentary debates consist of ethical to diplomatic subjects,

covering a wide range of topics that include economics, history, international affairs, law, politics, sociology, and “just about every field of knowledge,” according to Smaw.

days a week normally, and six days a week when preparing for a completion. And how members are trained is a closely guarded secret.”

An associate professor of philosophy and faculty advisor to the Debate Team, Smaw has been the driving force behind the team’s success since the beginning. “Of course, I am proud of

the accomplishments of the Rollins College Debate Team,” he said. “Our members are excellent students who are routinely accepted into the best schools in the world. And, Rollins has received

acclaim at the local, regional, national, and international level,” besting debaters from recognized graduate and law schools nationally and abroad.

“More than this, I am proud of the people that our debaters become when they finish their education,” Smaw added. “The vast majority of our debaters accept excellent jobs after

graduating and all of them report maintaining their commitments to social justice and community engagement.”

The Rollins College Debate Team will compete in Miami, South Korea, and China before the end of the 2015-2016 school year.