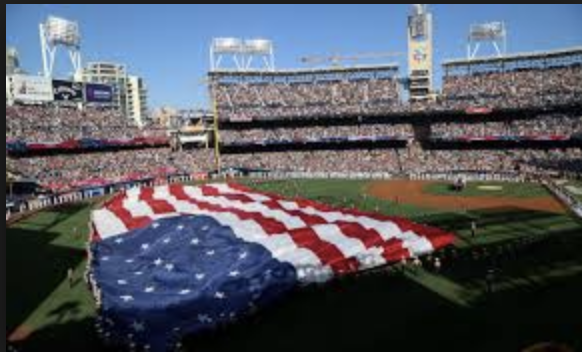 Is it disrespectful to protest during the national anthem?

There has been a lot of controversy concerning the current protest of NFL athletes, in which many players are choosing to kneel during the National Anthem to bring attention to racial inequality in the United States. Black athletes using their platforms to protest inequality is not a new phenomenon; as far back as 1968, American Olympic athletes Tommie Smith and John Carlos raised the black power salute during their medal ceremony. Then, like now, the general populace was in a frenzy. In fact, both athletes were banned from the Olympic village due to their overtly political gesture, which the International Olympic Committee leader Avery Brundage saw as a violent attack on the apolitical atmosphere of the Olympic games. Brundage, however, had no problem with the Nazi salute being raised at the Olympics twelve years prior. For this reason, it seems that just as the Black Power protest was rooted in defending against racism, the response was rooted in racism itself.

Presently, many football players have taken up the mantle. The controversy began last football season with Colin Kaepernick refusing to stand during the National Anthem in order to support the Black Lives Matter movement in its fight against police brutality. Other players, such as fellow 49ers teammate Eric Reid, joined his protest. Kaepernick responded to the controversy by kneeling rather than sitting, in order to seem less disrespectful. In the current season, no team has picked Kaepernick, despite the fact that he is a skilled professional athlete. This is likely a direct result of many Americans’ claim that he and all those who kneel are disrespecting our troops and our country. Even President Donald Trump has chimed in with one of his infamous Twitter rants, standing behind people booing the players who kneeled. In his opinion, “The issue of kneeling has nothing to do with race. It is about respect for our Country, Flag, and National Anthem. NFL must respect this!” However, as a white man, President Trump does not get to determine what is and is not a racial issue.

Protest is something ingrained in the nature of our country. We were born from a revolution against an oppressive government. The civil rights movement, which most people would praise as a beneficial historical event, was a series of protests for the rights of black people, which white society frowned upon at the time. Like MLK, these modern protesters are not hurting anyone. Personally, I cannot blame black athletes or their allies for not wanting to stand in support of a country that mistreats them now and always has.

As football season has kicked back up into full swing, the protest has evolved a bit from where it began. It is still a demonstration against police brutality, but as more and more athletes have knelt since Trump’s objection, it seems to have also become something of a display of the country’s dissatisfaction with our current president and his government. Whereas before it was maybe a few players engaging in civil disobedience, entire teams have now taken a knee on national television or linked arms to show their solidarity.

Some people think that, even if their cause is good, the players themselves are not helping; they are just kneeling. I would like to argue that they are starting a conversation. They know that, as wealthy men, they are privileged and that, as athletes, they have a national platform. By kneeling or linking arms, they have gotten the people of the United States talking about what it means to be black in America, and maybe some people who had not thought about it before can begin to work toward a better future.