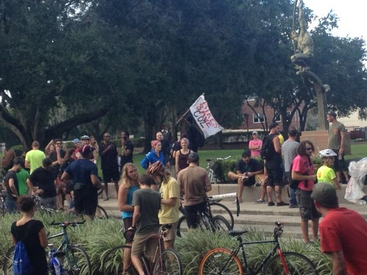 They didn’t stop at red lights or stop signs and they didn’t pull over for cars…. nearly 200 bikers took over the streets of Winter Park and Orlando. Most were dressed in black, and some were carrying flags saying, “bikes save CO2.” Teenagers, adults, children, and even babies came together to protest the Keystone XL Pipeline.

EcoRollins is known for its strong presence on campus, advocating awareness of human impact on the environment. Recently, eight students took part in the event that tackled a national issue.

The six-mile bike ride started and ended at the Orlando Science Center, ruling downtown and smaller cities in between. They rode with pride, heedless of the drivers honking and yelling. They conversed with one another as if they had been friends for years, and welcomed roller-bladers and skateboarders with open arms.

The rally was formed by Orlando Critical Mass, IDEAS, and The Hive. Jeff, a biker from The Hive gave insight as to why exactly this was the chosen way for protesting. “We’re here to make awareness,” he said… and that’s exactly what they did.

Somewhere along the six-mile route, someone was standing on top of a building waiting for the bikers to come around. Once they did, the photographer took a picture of the bikers from above, showing that dressed in all-black, they formed the image of the pipeline, taking over. “It’s a strong message,” said Jeff.

EcoRollins managed to take part in an event that captured the potential danger of a national issue. The Keystone XL Pipeline is causing breakouts of protests all over the nation, but while most people stand outside buildings holding signs, Rollins students took on the duty of commanding the attention of the greater Orlando area.