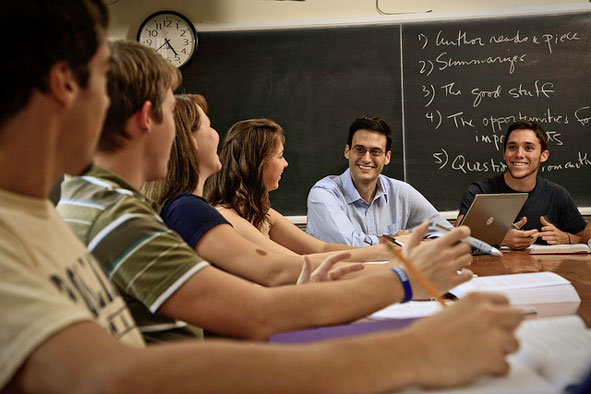 The first time I told my high school economics teacher that I was planning on becoming an English major, his reply was: “Ha! Good luck with that! You’re going to be broke.” I, of course, took great offense to his remark. Yet, it wasn’t until my first year in college that I had any idea of the commonality of this criticism. Waves of people offering me unsolicited advice about how I could make money as an English major, doing what they deemed as “practical” office jobs, gave me an unfamiliar sense of anxiety about what I wanted to study. Suddenly I felt insecure about it—afraid that I really would end up working at Starbucks for the rest of my life while drafting up some mediocre novel and shipping it off to publishers.

Why are English majors constantly ridiculed? What is it about my fellow Norton-wielding grammarians that gets under everyone’s skin? For starters, jobs. We live in a time when talking about “the job market” makes many a student shudder. There is a myth that English majors ignore the existence of this market altogether and our potential roles in it. In a CNN interview, Neil Degrasse Tyson argued that people with science and math skills were the innovators and drivers of the economy. Where do the people studying the arts fall? The truth is, it doesn’t matter what you major in, as long as you know what you want to do career-wise, and understand the amount of work needed to get there. It is not our responsibility to discourage another person’s interest of study and pass it off as being “concerned citizens.”

What is it about my fellow Norton-wielding grammarians that gets under everyone’s skin?

What if the argument is not about jobs? What could possibly make others feel the need to scrutinize the English major? For many people, the English major is a reminder of your stern high school literature teacher who scolded you about which literary period was your favorite. An image of a person with horn-rimmed glasses sipping tea and reading Jane Austen may come to mind. It is this pedantic stereotype that seems to annoy people the most. But there are many different kinds of English majors who may minor in different fields of study. Even majors with a writing minor can choose the “professional” or “creative” path to writing. We are not all trying to become teachers or novelists. Many go on to study law, business, communication, or science. There is no set approach to what an English major can or should do. For the most part, we study language. We study how intangible it can be and the diverse and beautiful ways that it can be laid out on the page. Any conflict can be understood through language. Through fiction and nonfiction, we study life and human behavior.

In a piece from The Chronicle of Higher Education, Mark Edmundson persuades students to consider majoring in English. He states, “The businessman prattles about excellence, leadership, partnerships, and productivity. The athlete drones on about the game plan… the politician pontificates about unity, opportunity, national greatness… when such people talk they are not so much human beings as tape loops.” If we approach literature, language, philosophy, and art with this attitude that they are separate from modern society, we lose out on some of the most important parts of human life. As for me, I agree with Edmundson: “To me an English major is someone who has decided, against all kinds of pious, prudent advice and all kinds of fears and resistances, to major, quite simply, in becoming a person.”