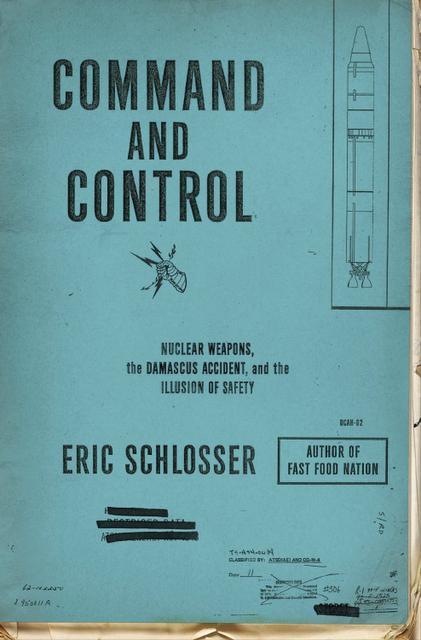 By Christopher Sarafian on September 17, 2014

This past Wednesday, September 10, Eric Schlosser, author of Reefer Madness and Fast Food Nation, paid a visit to Rollins College to speak about his most recent book Command and Control. A work of historical nonfiction, Command and Control the details the timeline of nuclear energy and warfare from the Manhattan Project to the modern day. Schlosser’s book centers upon several prime concerns and issues relating to the potential usage and detonation of nuclear weaponry. The book’s primary concern is to educate the masses about the dangers that lie beneath our feet.

Schlosser says in Command and Control, “Although most of the events in the book occurred a long time ago, they remain unfortunately relevant. Thousands of nuclear warhead still sits atop missiles belonging to the United States and Russia, ready to be launched at a moment’s notice.”

While the book reads like a work of fiction—it’s face paced like a novel and we become invested in the “characters” and the storylines—it is, unfortunately, a work of nonfiction. Schlosser hosted a private student panel discussion, in which the audience asked him various questions about the current standing of nuclear weaponry. One topic that arose during the discussion involved the United States’ relationship with Russia. Schlosser quickly brought it to the audience’s attention that the Russian-American relationship is even less sturdy than one may have thought. Some time ago, I remember reading an article about the Obamas visiting Russia. Apparently Sasha and Malia toured the Kremlin with first lady Michelle Obama. I had this image running through my head of both Obama girls scampering around the Kremlin’s deep hallways, snapping pictures of the art and architecture while Obama and Putin ate lunch and smoked cigars in some far distant room.

Schlosser snapped this delusion in half by reminding us that Dmitry Kiselyov, a prime Russian news reporter, handpicked by Putin himself, had stated that, “Russia is the only country in the world that is realistically capable of turning the United States into radioactive ash.”

In addition to the potential danger existing in conflict between the U.S. and Russia, Schlosser elaborated on the possibility of nuclear terrorism. According to Schlosser, there’s a huge risk involving nuclear blueprints or weapons falling into the hands of terrorist organizations. Schlosser informed us that, unlike most countries, terrorist organizations that acquire nuclear weapons would not use rationality in regards to their actions, as consequence rarely permeates their thought processes.

In Mary Shelley’s Frankenstein, Dr. Victor Frankenstein creates a monster and spends the rest of the novel attempting to deal with its heinous actions and their costs. Our modern world plays somewhat of a similar role: the Americans of yesterday created a weapon—a monster—of the utmost horror. At present, it’s the current generation’s responsibility to tame and maintain this horrific scientific creation of the past.