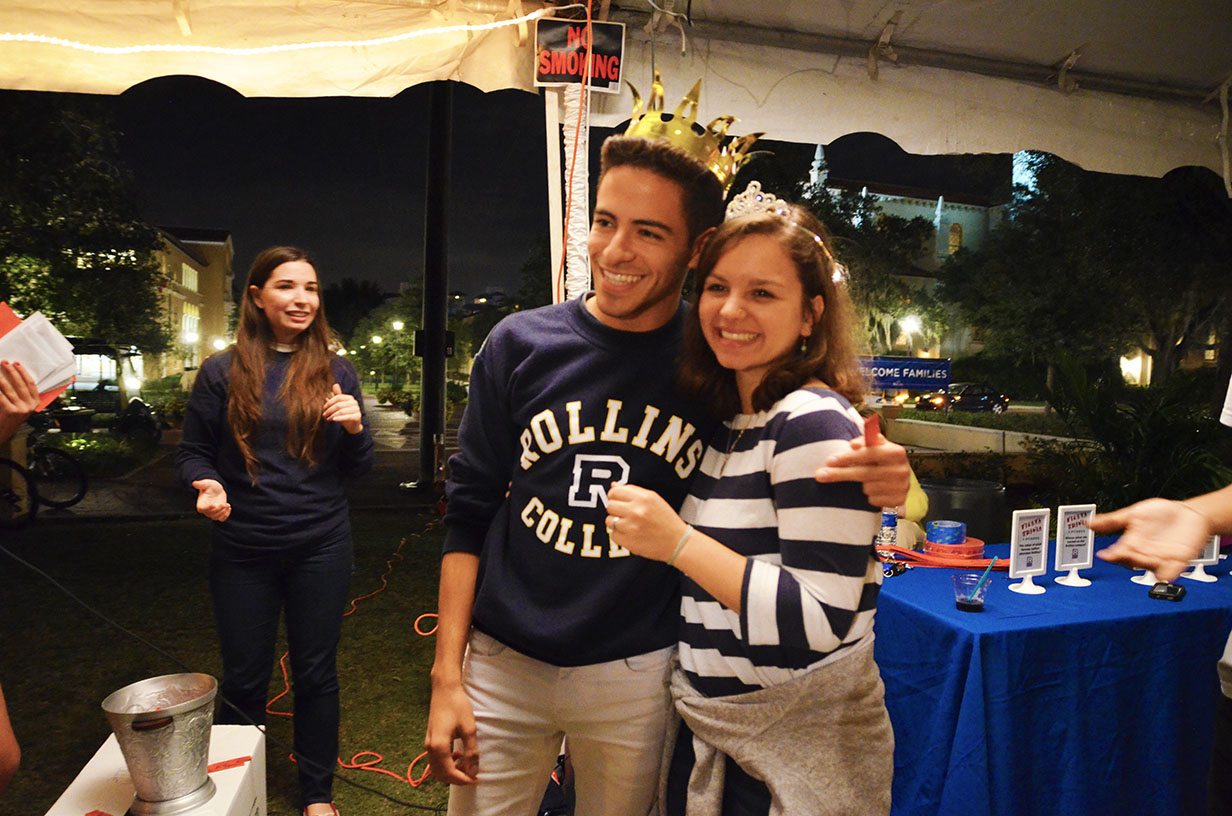 The Fiesta Is Back at Rollins

La Bamba! La la la bamba! Laa laa bamba…Do do dodo doodoo do do do (x2) TEQUILA! Well, substitute the tequila for sweet lemonade; throw in some refried beans, sour cream and salsa; sprinkle in that refined Rollins cheesiness; and wrap that little fiesta up in your flour tortilla! All of this under a white tent with ambient string lighting and a live mariachi band created a reminiscent scene on November 4 when R-Pride revived an old Rollins College tradition: Rollins Fiesta. Speaking with Kara Daniel ’13, I found out much more about the fiesta, its history, and its future.

The event was sponsored and run by R-Pride with funding from Fox Funds and REP. However, the idea came about last spring during Alumni Weekend, when Robert Salmeron and Faith Galloway hosted Talking Traditions, a panel where alumni and current students discussed both past and present Rollins traditions that continue today (e.g., Fox Day) and traditions that have gone the way of the dinosaur (e.g., Fiesta and Cat Day). “Some students were interested in the idea of Fiesta, including Jesyca Ramirez ‘14, so she and I decided to head the initiative of bringing it back to Rollins”, stated Daniel.

Daniel told me that Fiesta began in 1937 as a philanthropic event to raise money toward financial aid for students. It always carried a carnival-like atmosphere, but through the years it grew to include a parade down Park Avenue, including roller coasters and rides, live animals on occasion (even elephants), and the annual Fiesta King and Queen. Despite the name’s implications of a Mexican-centered event, Fiesta was given a different theme each year, and organizations were responsible for creating floats for the parade and manning booths. It was a great way to get everyone on campus involved. Even through its success and vibrancy, Fiesta eventually ended in the 1960s due to the lack of funding.

Daniel said, “We were extremely happy with the turn-out and honestly caught off guard (seeing as we ran out of food only an hour into the event). This year, we were trying to see if there would be enough student interest to bring the event back, so I think we were successful in that aspect. We are already starting preparations for next year’s Fiesta, because we would like to bring it back to its full former glory as well as get more organizations involved (i.e., the parade). Sadly, Jesyca and I are both graduating this year, but we are looking for other people who are willing to help bring Fiesta back as an annual event. Rollins has so much to offer and there are many ways to take advantage of it while you’re here. R-Pride, for example, has an entire committee dedicated to Rollins traditions (keeping them or reviving them), so if you are interested in starting or bringing back another tradition, that’s a great place to start. There are some other ideas in the works, but you’ll have to come to find out more.”