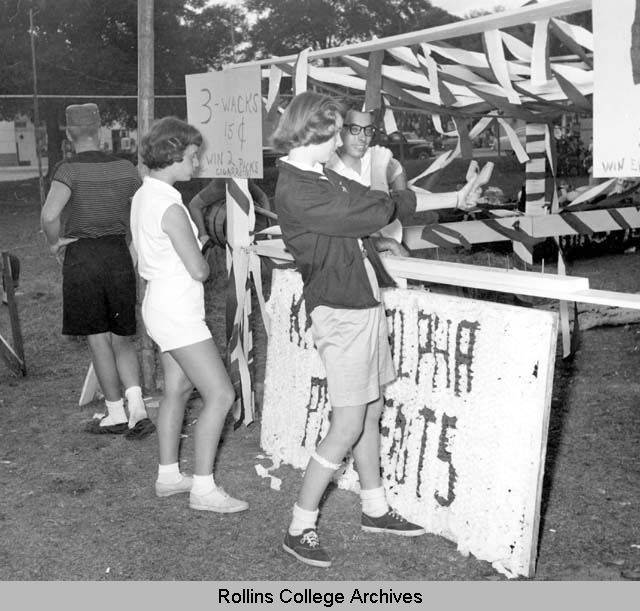 Imagine carnival booths dotting Mills Lawn, elaborate floats travelling down Park Avenue, an actual roller coaster on campus, and even an elephant roaming around Holt Avenue! For about 30 years, an event at Rollins College, Fiesta, made all this happen. Nichole Schlund in Alumni Relations explained to me the history of this once-treasured tradition of Rollins. “I learned from the Rollins Archives that the first ‘Gypsy Fiesta’ was organized by the Rollins Women’s Association and occurred during the spring semester of 1937,” Schund shares. “The event featured fortune-telling, folk and gypsy dancing, a ‘Thieves’ Market,’ pony rides, and food. During Hamilton Holt’s presidency, the Rollins community and student groups came together and made Fiesta an important fundraising event for the College. The event grew and grew–adding floats, decorated cars, and performances from the college band in the 1940s.”

The event soon became too large for the Rollins Women’s Association to handle, so it was turned over to the Student Government Association. However, by the late 60s Fiesta no longer received enough funding to continue, and it died out like many other old Rollins traditions, becoming just a faded memory to those who attended it.

That is until Jesyca Ramirez ’14 saw a presentation last Alumni Weekend on old Rollins traditions and learned about Fiesta. After hearing alumni speak fondly about the event, Ramirez was so impressed and inspired by it, but felt “sad and disappointed” that it died out, she says. As Vice President of the Senior Campaign Committee for R-Pride and member of the Traditions Committee, “Ramirez is the student who really put her passion for Rollins into action,” says Schlund.

Ramirez, along with Kara Daniel ’14, have lead the charge to bring Fiesta back to campus. Fiesta was always in the spring, but several students have expressed a need for a “signature” fall event, as the spring already has Lip Sync, Fox Day, and Fox Fest. “We’re hoping to establish an event true to the original as possible,” says Ramirez. Even though they did not receive enough funding this year to restore all of Fiesta’s components, and there are more safety regulations since Fiesta first left campus (sorry, no makeshift roller coasters allowed), this year’s Fiesta will still feature fun carnival booths, a churro bar (courtesy of REP), taco bar, piñatas, mariachi band entertainment, prizes, and the crowning of a Fiesta King and Queen.

Ramirez eventually wants Fiesta to become an annual event once again and be as large as it once was. “Hopefully it can grow back to what it was to the Rollins Community,” she says, “but I know that it will take time.” Schlund also says, “If the event continues in the future, the plan is to bring back the parade, make it more of a collaborative campus event, and rekindle the philanthropic spirit of the event.”

Fiesta will be held this year at Mary Jean Plaza on Monday, November 4th–Rollins birthday. What better way to celebrate than with games, music, churros and piñatas?