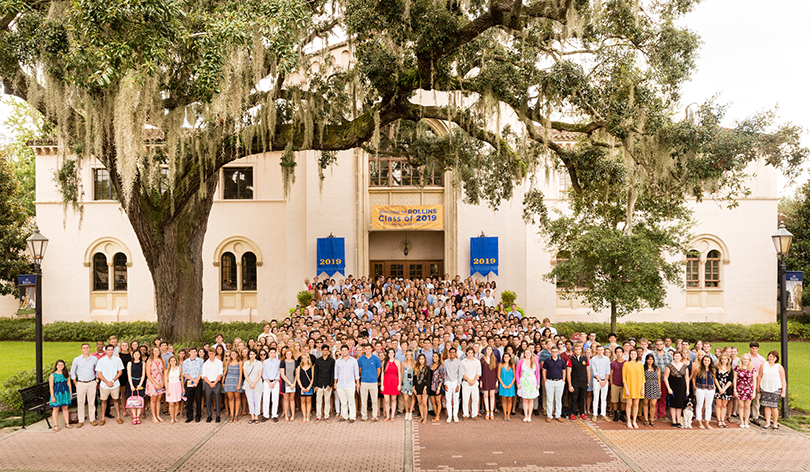 Three freshman students give insight into the adjustments they made and things they discovered as they started a new chapter in their lives at Rollins.

The first day of orientation found me crying in my car, the nerves of starting college terrifyingly overwhelming. Yes, I would still be living at home, and yes, I would still have the support of my family, but starting college had suddenly made me realize that real life was about to begin. I was about to be thrown into the world, expected to be a capable and responsible adult, and I was petrified.

As soon as I arrived on campus, however, I felt silly for ever having been worried at all. Within the first 10 minutes I realized everyone else was just as scared as I was. I managed to make several friends, all of whom I have been able to grow closer to throughout the school year so far. Orientation ended up being more fun than I would have ever imagined it could be and was followed by several amazing first weeks of school.

I find myself excited to wake up and go to class every morning. I find myself enjoying my homework and even ending up staying on campus far later than required most days just to enjoy the facilities. I look forward to studying in the library with friends or grabbing dinner at the campus center. It is a bit different—and sometimes challenging—to live off campus, but it is definitely worth it to be a student at this amazing school

As a fellow freshman, I can truly say that this first taste of the college life is pretty sweet. Not to say there were not any sour moments, but I would rather have a mouth full of skittles than a mouth full of war heads. Anyways, I have to admit that I was a bit nervous as I took my first step into Rollins College. I was worried that my transition would not be so easy. So when I was introduced to so many people, students, advisors, and clubs that wanted not just me, but so many other freshmen to be a part of something amazing my concern was blown away. They made me feel so invited and welcomed! So at home that I began the first week of school on a good note. So thank you Rollins College for this great first taste! Hopefully, the rest of the class of 2019 can agree with me when I say that this upcoming year is going to be great!

Four weeks ago, hundreds of freshman piled onto the Rollins College campus and were soon greeted by President Cornwell with the words “You aren’t going to believe me, but these next four years are going to fly by.” Now, almost a month into my first semester, those words are really beginning to sink in.

I was not sure exactly what to expect when first stepping foot on campus. I knew that the college is ranked No. 1 for “Most Beautiful Campus” and “Most Philanthropic”—two qualities that first sparked my interest in Rollins College. However, as far as the student body itself goes, I was not sure exactly where I would fit in. I knew before arriving on campus that I had no interest in going to parties. Unfortunately, I was told by more than a few people that partying is central to having a social life in college.

Luckily, at least when it comes to Rollins, those people were wrong. Thanks to clubs, RCC events, and the generally small class sizes, getting to know fellow Tars has been easy. From sororities to muggle quidditch, there really is something for everyone. It does require putting yourself out there a little bit, but I have discovered that if you do, you will have no problem finding your tribe.