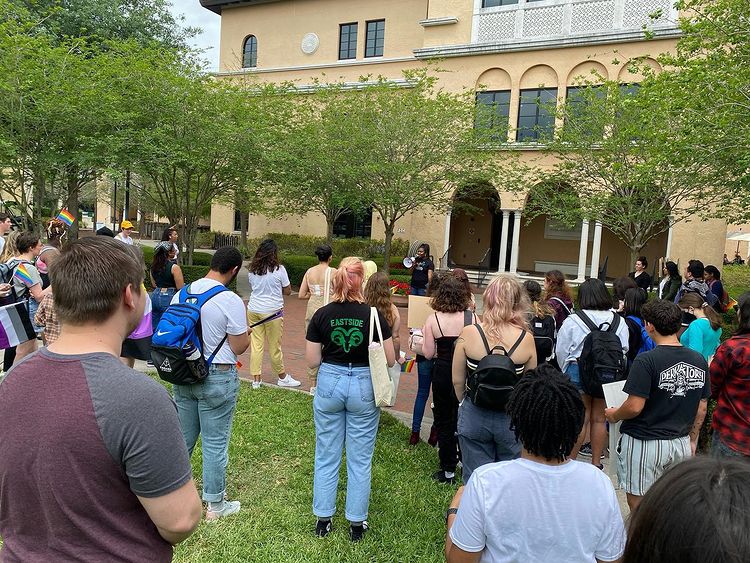 I am gay. Very much so in fact.

News of HB 1557: Parental Rights in Education – known also by the more infamous title “Don’t Say Gay” – has swept the nation for the past three months. In a morbid way, I almost knew the minute that the bill was introduced that it would likely pass. Call me jaded, but I tend not to trust the state of Florida to prioritize things like human rights for marginalized folks.

Pessimism aside, I want to discuss HB 1557 from my area of expertise: policy. Before even coming to Rollins, policy advocacy was something I was extremely passionate about. I worked for years with the YMCA’s Youth and Government program in New York, writing mock legislation based on state law, and I would spend my summers doing the same thing with over 600 other students from across the country. Before COVID-19, I was in DC, meeting with lawmakers to advocate for tax laws that would benefit the nonprofit sector and reverse changes instituted by Trump’s 2017 tax reforms.

I’ve essentially been trained to read legislation and pick it apart within minutes, and HB 1557 is no different from the hundreds of bills I have read before.

When we look at exactly what this bill is doing, it just makes you scratch your head and ask how someone wrote this and rationalized it as something they were comfortable presenting to other human beings.

First, “Don’t Say Gay” is a misnomer. Yes, it has an internal rhyme scheme and is easy to rebutt on late-night television (or, I guess, the Oscars, where aside from other events Wanda Sykes shouted gay a couple of dozen times), but this isn’t just affecting gay people. Conversations on sexual orientation and gender identity impact the entire LGBTQIA+ community. The good old alphabet mafia is often reduced to “gay” for simplicity at the cost of invalidating so many in the pantheon of queerness.

But to extend this into policy analysis, the text of the signed legislation says that “classroom instruction by school personnel or third parties on sexual orientation or gender identity may not occur in kindergarten through grade 3 or in a manner that is not age-appropriate or developmentally appropriate for students in accordance with state standards.”

Classroom instruction, especially in those grades, is much more significant for social development than in higher-level education. One study from the National Center for Biotechnology Information (NCBI) found that, between kindergarten and third grade, students begin to learn everything from simple social skills to the development and testing of personal beliefs. Elementary school children spend around six hours a day with their teachers; social questions always come up because a fundamental part of this age group’s growth involves learning how to socialize and interact with others.

Any instructor with a queer person in their lives is going to be impacted by this. The kindergarten teacher who married her girlfriend last year likely won’t be able to mention it when her students ask who she’s married to, unless she plans on saying her wife’s name and then answering no follow-up questions. In turn, she’ll likely hide personal ties to her life, like screensavers or pictures of her and her wife. Her classroom will be inherently less personalized because the concept of not being able to discuss sexual orientation means her life is off-limits in the classroom.

For queer children, it’s the small moments of representation when we are young that can help us feel validated and accepted. I grew up with many loving queer people in my life, so I never had to wonder if there would be acceptance when I chose to come out. Even then, the fear I felt, tied to the social stigmatization that queer people face, kept me closeted until my last year of high school.

The argument that discussing sexual orientation or gender identity is inappropriate for children is nothing flat of homophobic, transphobic, and heterosexist. Queer identities are not more sexual than their cisgendered or heterosexual counterparts. We’re not asking to show screenings of “Brokeback Mountain” for five-year-olds or to put something in chicken nuggets that turn kids queer. We’re demanding that queer identities are treated with respect. And we’re demanding that classrooms are spaces of love and support, so that if a child has questions about their identity, they can find guidance in their teachers and classrooms.

Have any additional tips or opinions? Send us your response. We want to hear your voice.