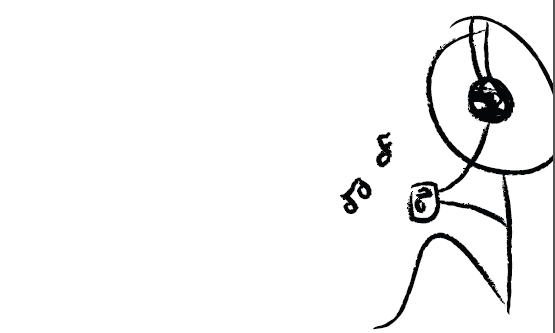 Dinner with my parents on November 2, 2004: scallops, served dejectedly over pasta, consumed despondently over the course of a sad half hour. I find it hard to believe three people have ever looked less happy about shellfish than we looked that night. It wasn’t the mollusks’ fault, though. It was my parents’, for being actively
involved in Democratic politics for the past few decades. It was my own, for spending that year listening exclusively to the Clash and Gang of Four. Kerry was screwed; we knew it; and it was not OK.

But it wasn’t a shock, either—wasn’t unexpected at all, in fact. For weeks, in print and on television, reputable journalists had been referring to the guy in the past perfect, like the Senator was nothing more than an ancient footnote in American political history. What John Kerry was, in fact, was a modern footnote— recently penned, but a footnote all the same: eminently forgettable. Still, at dinner, I expressed dismay at my
peers’ indifference to the election, prompting my father to put down his fork and nod.

“Kids are different now,” he said. “When I was a little older than you are, a couple of my friends and I almost occupied the economics building at Macalester.” Instead of preemptively answering any of the eighty-orso
questions what he’d just raised, he took a bite of pasta. He swallowed. “Your generation doesn’t really seem to care as much as mine did.”

I never found out why my father almost occupied an economics building. I still am unsure what an occupation would have entailed, or to what end it would be pursued. But my dad’s anecdote is responsible for a misconception about my generation—a misconception that, more than anything else, informed my feelings toward it—I carried with me for over eight years. Until this election season, I believed my generation was politically apathetic, and that this apathy was indicative of a larger problem. I believed our failure to get the National Guard called out on us, to hold raucous protests and occupy university buildings, was moral in nature. I believed wrong. I’ve followed my friends and classmates as they’ve followed this election, and I’ve come to realize we aren’t apathetic. I’ve also come to realize the previous realization isn’t a good one. Not even close.

This happens fairly often: An election year rolls around and, come autumn, stories like this one get published. There’s been, in the past twenty years, a lot of quality journalistic head scratching done over Why the Kids Don’t Care. Thing is, the parties responsible for such pieces are very rarely kids themselves; and this constitutes a problem. It makes these pieces wrong—their conclusions, their premises, everything: wrong. Just how it does is best illustrated by one of the best pieces of YVA journalism to date: David Foster Wallace’s 2000 essay “Up, Simba.”

Apathy, I posit, is basically homeostatic. It’s how people feel about things provided there’s nothing compelling them to take an interest— the norm from which aberrations occur, rather than an aberration in itself.

The essay’s ostensible topic is John McCain’s failed presidential bid that year, but Wallace’s real interest is young voters, and the source of their apathy. The problem, he argues, is the feigned sincerity of most American politicians use to disguise their bald avarice. According Wallace, politicians pretend they aren’t power-hungry in order to gain power, and their shtick doesn’t work on young Americans. There is no demographic group in the country more cynical. If you keep lying to a person, and he knows you’re lying, he’ll probably stop listening in no time. And, Wallace reasons, young Americans know. It’s a compelling argument. But it gets the nature of apathy wrong.

David Foster Wallace was born in 1962. This means, when the American Embassy in Saigon was evacuated and the Vietnam War ended for good, he was about thirteen years old. It means he was too young, then, to even obliquely fret about being drafted. It also means he was way too old for the memory of the draft to be even somewhat wooly. Odds are, his entire life, Wallace remembered the draft as clearly as you remember some of the better sandwiches you’ve eaten—as something just that concrete.

So it makes sense people most confused by this generation’s political apathy are old enough to remember a time political apathy was effectively impossible. To remember when caring wasn’t a choice. It’s natural they treat apathy like a scourge—an unnatural state, its cause discernable, its cure attainable. But I have never lived with any kind of war except the kind people sign up to fight: political apathy looks a little different to me. It looks like something spurious to attribute to our generation as it has been.

Apathy, I posit, is basically homeostatic. It’s how people feel about things provided there’s nothing compelling them to take an interest—the norm from which aberrations occur, rather than an aberration in itself. A military draft is abnormal. We’re not. Apathy isn’t a vice.

Though, if there’s anything I learned from the 2012 presidential election, it’s that involvement isn’t a virtue, either. Our generation cared about this election. By the time it was over, I kind of wished we didn’t care—really wished we didn’t—but never mind that. We cared.

Around 2:00 a.m. on Wednesday morning, I was on Facebook, staring our generation’s political id square in its big, dumb face. It had been about three hours since they’d called it for Obama: he’d won another term in the presidency, and I was reading the status updates. In them, I had incontrovertible evidence. We were definitely politically opinionated. I’d already suspected as much, though. What surprised me was how much these opinions made us sound how I imagined Americans did in North Korean sitcoms. Three separate friends had already vowed to seek refuge from Obama in Canada, one of whom had actually named the Affordable Healthcare Act as a key factor in his decision. More people than I could count had said they loved Obama, which seemed like kind of an OK reason to vote for him. A bunch of people appeared to have voted for Rosanne Barr.

I guess I could have been ashamed all over again. It would have made sense. I mean, really: hiding from socialized healthcare in Canada. But it would have been a waste of time. The shame I felt at dinner with my parents eight years earlier was basically shame over the very same thing— passivity and complacency. This kind of political involvement was identical to political apathy. Louder, though. I’d spent eight years quietly imploring my generation to care about politics, but what I’d really wanted it to do was think about them. It was the difference between occupying an economics building, and knowing what you wanted to do once you got inside.