Get a Room–If You Can Find One… 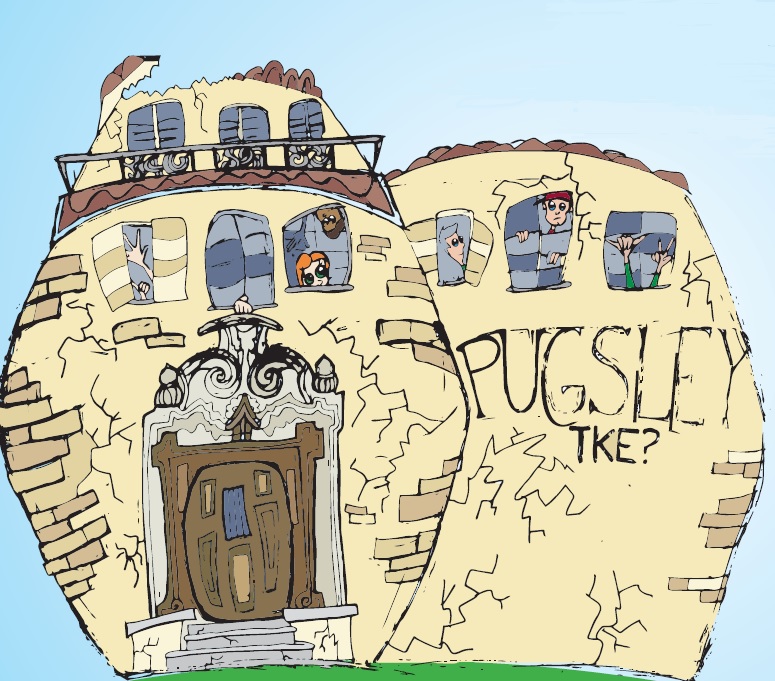 Last semester, TKE was evicted from Pugsley Hall, the dormitory that has been home to the fraternity for several decades. McCoy follows up on the status of Pugsley and the growing student body.

A question often asked of students who attend small liberal arts colleges is does everyone just know everyone? It can feel that way at times – flying under the radar becomes a challenge once you’ve established a reputation for yourself amongst the community. Whether you excel in your field of expertise, captained a sports team to its championship, lead a nightlife of promiscuity (which indeed leaves you reputable in certain circles), or you’re simply that lesbian on the tiny skateboard, it isn’t hard to standout within a notoriously less than eclectic student body.

But then there are those moments, prominent at the start of fall term, when you walk into a classroom greeted by unanimously unfamiliar faces. You think to yourself, “Who are these people?” and “They go to Rollins?”. Walking through campus between the rush hours of mid-morning into lunchtime yields a similar effect. While it’s true that Res Life reports 487 members of this year’s freshman class (an interview with the dean of admissions reported 480), any of those unfamiliar faces could just as easily be one of the rumored 83 transfer students (admissions reports 74) new to campus this fall. As a whole, we are noticeably increasing in undergraduate population as smaller classes graduate to be replaced by record highs for the classes of 2015 and 2016 in the mid 500’s. Approximately a decade ago, at what admissions states to be “around 2002,” the undergraduate total was holding fairly steadily at an estimated 1720. Today they report an approximate 1900, though Res Life states there are 1176 students living on campus with 824 living off – adding up to an even 2000. Forty percent of that 1176 are the freshman class occupying five buildings: McKean, Ward, Rex Beach, and two full buildings of Strong Hall.

So where are the three other grades living this year? Per usual many have been placed in both Sutton and Elizabeth. But \members of these older grades surely recall the not-so distantly previous tenants of what is now Pugsley Hall: the fraternity boys of TKE. This year’s occupants of Puglsley hall are now the much broader category that is veterans to on-campus living. Similarly, what was the KKG house is now Rollins Hall, a dorm filled with student leaders. Though it was a national decision that revoked Kappa Kappa Gamma’s charter for the next four years, TKE remains hopeful that they will regain their on-campus living privilege come spring, having had their charter revoked by the authority of Rollins itself.

Sitting down and speaking with Vice President of TKE, Aaron Tanyhill, to discuss the matter, he says it was a series of about five relative incidents violating our school’s policy on underage alcohol consumption that consequently led to their eviction from the house. Tanyhill feels strongly that the brothers were all generally shocked by the severity of the sanction, particularly given that any violation of school policy they had been cited for occurred off-campus and not in or around the actual TKE house or campus. He says the brothers are “very literally heartbroken” and feel that ache every time they walk past their former headquarters and home.

When asked what type of changes the boys are putting forth in order to restore their tainted reputation and return to the house, Tanyhill appeared passionate about their efforts. TKE is currently undergoing reorganization of their executive board while revisiting/restructuring the constitutional values/bylaws of their organization. Additionally, they will be requiring more on-campus involvement by each individual brother along with active membership review processes. Though Aaron is a member of this year’s senior class, he says his hopes are still high that the brothers will get their house back so the future generations can enjoy the same opportunity and level of bonding he feels privileged to have been apart of during his years here.
Fortunately for the boys, Abby Prokop speaking on behalf of Res Life says she does hope to see the boys make their way back into their house, given they meet certain expectations of them and noticeably implement some positive changes to their organization. Furthering that notion, if you were to enter Pugsley Hall and take a peek behind a new piece of artwork adorning the fireplace in the common area, you would see that the official TKE crest has been very purposefully left in place as opposed to having been painted over.

But with a confirmed report of on-campus living being at 94% capacity, that then begs the question where will the current residents of Pugsley Hall be placed if and when TKE is reinstated into their house? The answer to which is rather simple: Res Life reports imminent expansions to on-campus living facilities such as phase 3 of Strong Hall currently underway to add 55 open beds. A representative at admissions stated that they would never want to overload or create an unaccommodating, crowded campus atmosphere by enrolling a freshman class that would exceed our campus’ maximum capacity. Though with the undergraduate degree being today what the high school diploma was approximately a decade ago, it’s safe to assume colleges all across our nation are growing in population as the pressure to acquire degrees in higher learning grows increasingly necessary to keep up in such a competitive job market.

A positive recommendation that could be made is to get used to new and unfamiliar students passing you by and seated beside you in class. If one thing is for sure, it’s that Rollins is not getting any smaller any time soon.