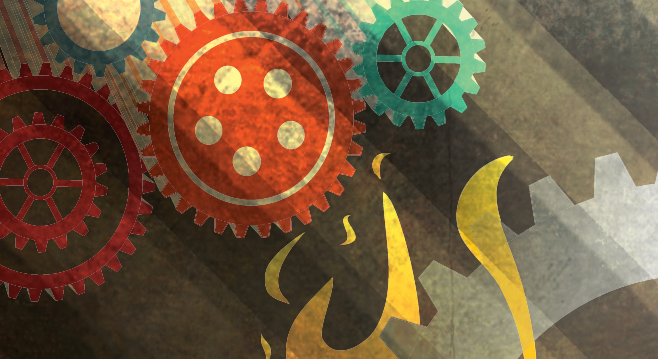 Differing in focus from culture to social change, these degrees  accommodate students seeking diverse business careers, despite the  rocky start to the implementation of the new curriculum.

To review a history of why International Business was put in the College of Professional Studies in the first place, look at the background section and timeline at the bottom of this article.

For better or for worse, students know when the faculty is arguing. Whether it’s because of the stray, uncharacteristicly biting remark, the increase in stressed-out expressions, or the out-of-the-blue class debate on a topic that relates more to the college than the course material, students can tell when their professors are not happy.

Over the last few years, as much as many professors have tried to rightfully hide the politics of their inter-department relationships from student eyes, students have noticed that the tension has grown. New colleges have been created, new majors have appeared, and President Duncan received a vote of no confidence. Meanwhile, most students are more concerned with the new menu at the CSS Café, the lack of parking, and what they are going to do after they graduate in about 100 days (that last one might just be me).

For the last few months, rumors have flown around Rollins, leaving students wondering what has upset the faculty this time, with everything centering on the development of two new business majors at Rollins.

In the 2012-2013 school year, Dr. Deb Wellman, at the time interim Dean of the College of Professional Studies (CPS), asked the International Business (INB) faculty to create a business program for the Holt School of a similar caliber to the INB program in the day program. After deliberating over different ideas, the faculty voted down their own proposal for an updated Holt business major citing the pre-professional nature of the Holt program in comparison to INB as well as the difficulty staffing both programs.

Business: The business day program major mirrors the updated program offered in Holt. It focuses on sustainability and social responsibility with a management concentration to provide students with a “solid foundation in business theory and practice, entrepreneurship, and innovation” (according to the department’s website). While the program prepares students for work in all types of business, it focuses on small and family-run businesses.

Social Entrepreneurship: The social entrepreneurship and business major describes itself as in “the business of changing the world.” It combines business and entrepreneurial knowledge with a broad understanding of societal issues with a focus on creating “innovative and sustainable solutions to the world’s most pressing challenges” (department website).

While the business major seems to follow a traditional business format, the social entrepreneurship major creates something unique that students, such as Kara Russell, recognize. “Social entrepreneurship is a cutting edge field and Rollins is pioneering this program. There is no other undergraduate institution that has a curriculum, connections and resources like this. Basic management skills won’t distinguish me from many other business undergrads (and even graduates with MBAs), but a social entrepreneurship degree will prepare me to be innovative and a step ahead of the game, especially when it comes to reforming non-profits to a more sustainable model,” says Russell. “When I explained my new major to diplomats and members of the intelligence community on a recent business trip to D.C., they were extremely impressed and interested in the curriculum.”
These changes left Rollins with three different business programs—one focusing on international business, one on general business with a focus on small business, and one on business and its impact on social change—all under the College of Professional Studies.

Weeks after these new programs were created, the remaining eight faculty in the international business department requested to be reinstated as a department in the College of Arts and Sciences (A&S) on May 1, 2013.

Dr. Jill Jones, head of faculty at the time, summarized the background leading to INB’s decision to ask to return to A&S: first, that the decision to create a Holt business program was opposed by the vast majority of INB faculty but created nevertheless. Second, she noted that there has been a dispute regarding who chairs the department; specifically between the department and the Dean of CPS [Dr. Wellman]. Finally, she stated that INB felt disenfranchised during the national search for a Dean of CPS, something confirmed during an interview with Dr. Alon, chair of the INB department (May 1 faculty meeting minutes).

Dr. Marc Fescherin, a professor in INB, argued in support for his program’s re-approval, stating that most of the faculty members that favored leaving A&S in the first place are now in the newly created Business major. Furthermore, he stated that INB had not changed its curriculum since leaving A&S. This lack of change shows that INB remains committed to liberal arts principals. Remember this statement—we will return to it in a bit, since, after returning to A&S, INB did decide to make change to its major.

Regardless that multiple faculty members requested to wait before making such an important decision, the faculty voted and passed INB’s request to return to A&S by a majority vote.

Looking back, Dr. Lauer, current head of faculty, said that INB could return to A&S because the AACSB accreditation rules changed, no longer tying the undergraduate business program to Crummer, providing much more flexibility.

In reflection, Dr. Alon felt that INB needed to return to A&S because “we believe that the arts and sciences is the foundation for good international business education.” He does not see accreditation, one of the initial reasons for leaving A&S, as a concern “because of faculty sufficiency, scholarly proficiency, and the quality of our program.”

Remember how Dr. Fescherin helped convince the A&S faculty to let INB back into A&S because the INB faculty had not changed the INB program? Just months after successfully returning to A&S, INB did make changes to its major, making the program easier to complete.
In October 2013, Dr. Alon approached the Academic Affairs Committee with a proposal to revise the curriculum of the International Business major.

He cited external and internal factors, including AACSB, which updated its standards in the spring of 2013, as well as the new lessened number of hours to graduate (128 from 140) that would require the major to cut down on its core requirements.

“We made it easier for students to complete the major,” said Alon. “we had to revise it anyway. We listened to students and looked at the availability of our faculty.”

While the three majors claim to focus on different areas, to be accredited by AACSB, they all must include the same core topics. According to Dr. Lauer, this created “some frustration among some faculty.”

International Business is, as mentioned by Dr. Wellman and Dr. Alon, “the flagship business program at Rollins.” Dr. Wellman differs slightly, saying that “there is enough student interest to have additional majors.” She continues, “none of us believed that we would be taking students away from INB. It’s a great program.”

And the new programs have not affected enrollment in INB at all. In fact, Dr. Alon stated that INB actually has a few more students in the major now than they did last year.

Dr. Alon separates INB from the new programs by talking about how INB “equips you with basic business skills in addition to culture and language. Our curriculum is world class. We are a member of a select, small group of universities that offer INB programs… and among those we are an elite program.” To the INB faculty, “there is no business that is not international.”

When asked to describe the differences between the business programs, Dr. Alon said that INB’s “faculty is quite strong… we are among the most productive faculty on campus. We believe in the mission of this college—we are the poster child of that statement… the other business programs are more embedded in professional education.”

When asked the same question, Dr. Wellman referenced the different focuses—international business is focused on international education while the business major is focused on small businesses, possibly more geared for someone who is planning to move back to a small town and run a family business. The social entrepreneurship major has an entirely different focus on global initiatives but specifically related to social change. 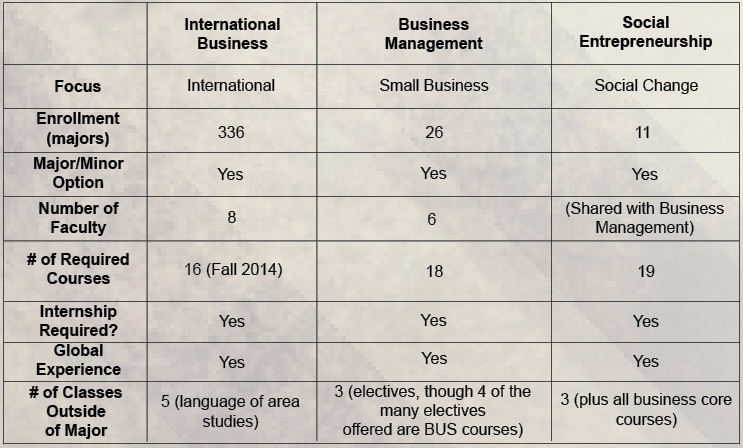 I was tempted to use the heading “INB vs. Business,” but the word “versus” does not seem accurate for this situation—or at least what it should be from the student perspective.

The Rollins’ faculty and administration’s number one priority is their students. Sometimes it may not feel that way—like when these types of conversations about new majors take a turn towards “we are better than them” or become inter-department battles for more faculty members, more funding, and, eventually, more students.

However, one consistent feature of everything I’ve seen, heard, dug through, and grown frustrated at while trying to put together this article is a common interest in what is most beneficial for Rollins students including what majors students are interested in as well as what students expect when attending a liberal arts school, particularly Rollins. Both faculty and administration are constantly searching for what majors make Rollins more appealing and what majors keep true to the mission statement of Rollins. Hopefully, these two new business programs will do both.

All the way back in February 2011, the current chair of the International Business (INB) department, Don Rogers, presented a proposal to the Academic Affairs Committee to change the INB major and minor. According to the February 15 committee minutes, Rogers cited an AACSB team visit report highlighting items that needed to be changed in Rollin’s INB department by August 2011. Proposed changes included a new introduction course, dropping two economics classes from the core curriculum, and reworking other courses so there is less overlap and so that the INB department met AACSB’s 60% of courses be above 300-level requirement.

Concerns about the loss of the two economics courses and INB losing its interdisciplinary nature led to the original proposal ending up not passing through Academic Affairs. Due to no INB faculty being able to attend the last Academic Affairs meeting of the year, the revised INB proposal was not considered.

At the end of April 2011, President Duncan spoke at the Arts announced a new Vice President position as well as a new college of pre-professional liberal studies (the College of Professional Studies) that would include INB, communication and education.

Soon after returning to campus in the fall, the Arts and Sciences faculty censured President Duncan, and, during the next school year, in March 2013, the faculty passed a resolution of “no confidence” in President Duncan. More details on each of these events can be found in
past Sandspur coverage:

2011, Mar. 22: INB proposal passage is rescinded due to econ concerns in AAC.

2011, Apr. 19: A new INB proposal was brought to AAC, but due to no representative from the department being present, the proposal was tabled.

2011, Apr. 27: President Duncan announces at the faculty meeting that, in order to “protect INB and Crummer,” he intends to establish a pre-professional liberal studies school—the College of Professional Studies.

2011, May 4: Faculty asks Board of Trustees to postpone approving the new college and the new Vice President position until the faculty time to consider the proposals.

2011, Sept. 22: The A&S faculty vote to censure President Duncan—showing that “the faculty as a body has been disrespected by one of its members.”

2013, March 21: Faculty voted for a resolution of “no confidence” in President Lewis Duncan.