On Wednesday, Sept. 21 at 2 p.m., former Secretary of State and Democratic presidential candidate, Hillary Clinton, spoke to a crowd of roughly 400 people in a temporarily-converted gymnasium at the Frontline Outreach Center in Orlando, FL. The event had been announced just two days before in order to prevent security risks and ensure seating for as many attendees as possible. Still, the line of people waiting to get in—hours before she was scheduled to speak—wove through the outdoor pavilion and stretched far in front of the building. Many attendees were forced to watch her speech on screens in their “overflow” room streaming live from the gym next door. 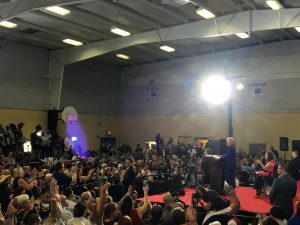 Attendees ranged in age, race, sexuality, religion, and dozens of other identities. Canvassers worked their way through the lines gaining signatures and handing out fliers and stickers for Planned Parenthood and local Congressional candidates.

Everyone seemed to be mostly in high spirits, despite the heat; some had called out of work and drove as many as three or more hours in order to see Clinton’s speech. A handful of vendors arranged tables with merchandise depicting Rosie the Riveter and buttons and caps proclaiming their wearers  “Ready for Her.”

Inside the gym, a small rectangular stage with a podium sat in the center with a ramp leading back into their staging area. Behind and to the side of the stage were temporary metal bleachers, and the area in front of the stage were ringed with plastic chairs. Behind these, dozens of cameras and reporters from local news stations were primed and ready to go.

Before Secretary Clinton spoke, she was preceded by a host of speakers including Mayor Buddy Dyer, who spoke Orlando’s recovery in the wake of the recent Pulse tragedy, and Congressional candidate Val Demings. Demings inspired the audience with her vibrant speech about her experience as the first female Chief of the Orlando Police Department and the need to fight for racial and gender equality moving forward. 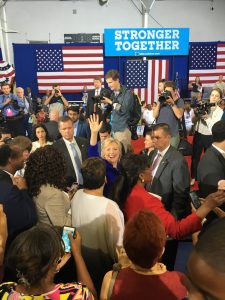 Secretary Clinton’s speech focused on advocacy for disabled Americans. Representing this issue were three other speakers, two who spoke about epilepsy and invisible disabilities, and Anastasia Somoza. Somoza had previously spoken at the Democratic National Convention about the positive impact Clinton has had on her life since she was 9 years old.

Clinton herself spoke for about 40 minutes on topics ranging from racial inequality to the need for national paid maternity leave and affordable child care. She focused most of her speech, however, on disability. She claimed that holding disabled Americans back from employment opportunities, even in the wake of the Americans with Disabilities Act, impacts the American economy as a whole. She cited the disabled unemployment rate—60%—and the fact that it is legal to pay disabled citizens sub-minimum wage in support of her argument. Her calls for recognition of the talents, skills, and dreams of disabled Americans were met with thunderous applause.

Noticeably absent from her speech were any references to her opponent, Republican nominee, Donald Trump. She instead focused her speech entirely on issues and policy proposals, including apprenticeships, technical programs at the high school level, and affordable community college for all Americans. Clinton believes that America needs to institute these programs to set examples for other countries—influenced by a global perspective on policy gained from her time as Secretary of State. It directly contrasted Trump’s nationalistic “Make America Great Again” slogan. Hard work and dreams, Clinton proclaimed, are what really “made our country great.”

Regardless of whether you support Hillary Clinton, all U.S. citizens over age 18 have the right to vote and should exercise that right. The Democracy Project is teaming up with multiple organizations at Rollins to make the registration process as easy as possible. The last day to register in time to vote in Florida is Oct. 11.