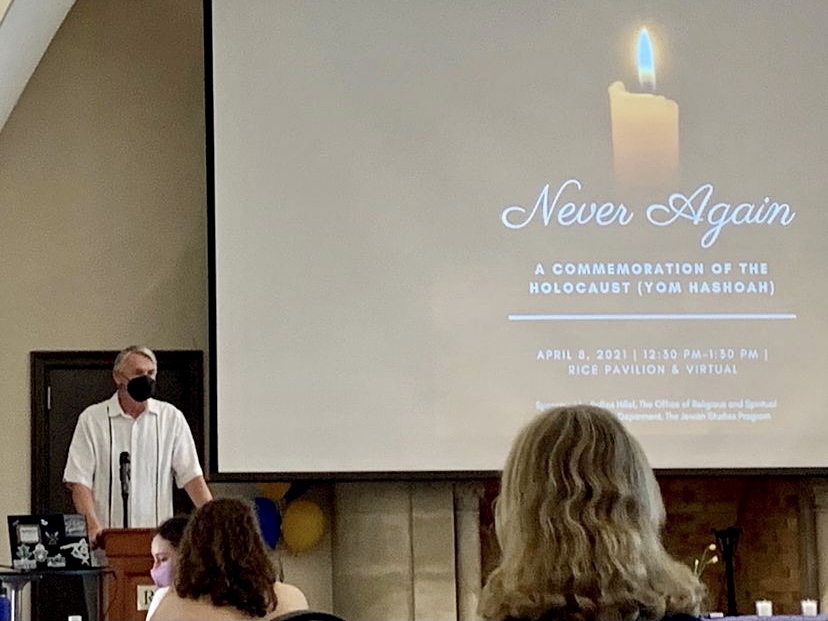 Holocaust memorial first of its kind at Rollins

On Apr. 8, Rollins community members hosted a memorial service titled “Never Again: A Commemoration of the Holocaust.” The event was held on Yom Hashoah, Holocaust Rememberance Day, and it specifically paid tribute to Jewish children who died in Auschwitz.

According to Associate Director of Jewish Life Emily Block, this event was the first of its kind at Rollins. While past events have focused on Holocaust education, such as speaking engagements by Holocaust survivors and events that commemorated the lives that were lost, this was the first event of this scale held by Rollins on Yom HaShoah.

Karen Gutensohn (‘22), president of Hillel, said that the themes of the memorial were extremely relevant to the present day.

Referencing the recent rise in incidents of antisemitic and anti-Asian violence, Gutensohn said, “We are in an unfortunate period in our history where we are surrounded by hate, violence, and bigotry. It is very important to remember the people we lost in the Jewish community and remember the impact antisemitism has on our community worldwide. It is important to remember so we can truly commit to ‘never again.’”

During the event, Gutensohn spoke about her experiences growing up as a Jewish child learning about the Holocaust.

In addition to Gutensohn’s reflections, the event included remarks from President Grant Cornwell, a recitation of the Mourner’s Kaddish by Dr. Yudit Greenberg, a reading from guest poet Holly Mandelkern, and the reading of the names of children who were sent to Auschwitz.

“The Holocaust Remembrance Event at Rollins was very meaningful to me on several levels,” said Greenberg. “As I recited the Kaddish, I thought of my many close family members who were murdered in the Holocaust, including several aunts, uncles, and cousins. One uncle who survived Auschwitz visited Rollins several times and spoke to my students about his experiences.”

Gutensohn said that, while previous Holocaust-related events were open to the whole community, they were almost exclusively attended by Jewish students and faculty members. This time, however, Gutensohn said she saw a broader swath of the Rollins community expressing interest.

“As we stand together as a community for racial justice, it is pivotal to learn from history in order to show solidarity with others who continue to suffer the consequences of prejudice, scapegoatism and hate,” said Greenberg. “This is our moral imperative for building and maintaining a just society […] I applaud the Rollins community for observing Yom Hashoah, and hope it will become an annual event.”