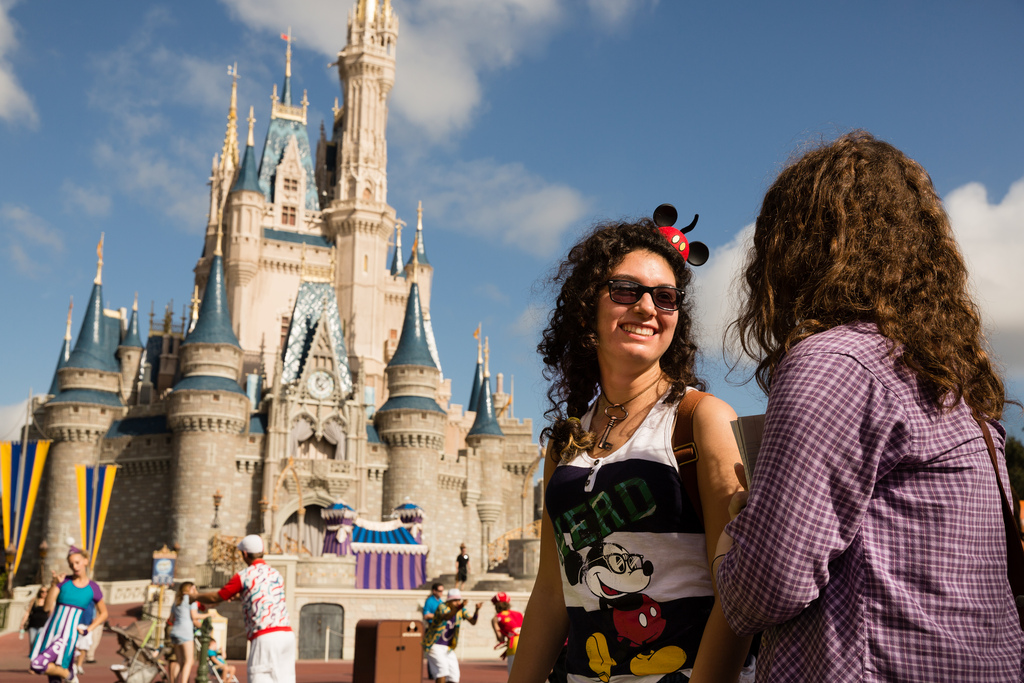 Intersession: Get to Know Your Choices

As a Rollins’ rite of passage, Intersession is a time to explore the liberal arts landscape without the constraints of GenEds and major maps. Offered the week before spring term, the intercession experience is included in tuition, and each course is worth two credits. From service trips to sci-fi films, public sexuality to Disney, these classes are a sure way to end Winter Break with a bang.

Listed in alphabetical order by department.

ART 210 The Visual Journal: Space, Place and Self.
Examines the importance of space, place and self through the visual journal, a mixed media fusion of writing and imagery. Artists, writers and travelers alike use journaling as a life-long practice of self-reflection. No previous writing or art experience necessary.

BIO 110 Biology of Marine Animals.
Explores the ecology, biology and conservation of marine animals. Representative animals from invertebrates, fishes, reptiles, birds and mammals will be examined, as well as the effects of human activities and exploitation. Course has a mandatory excursion to Sea World and carries an additional course fee. Suitable for non-majors.

BIO 212 Biology of Marine Birds.
Will explore the interrelationship between birds and the ocean. In class, will study the systematics, ecology, physiology, behavior, movements and conservation of marine birds. By conducting field research, will investigate behavioral methods and census techniques for studying wild marine birds at several Florida locations. Prerequisite: BIO 121.

DAN 421A Guest Artist Dance Production Intensive.
Course functions as a workshop for the DANCE component of SONG AND DANCE (formerly ROLLINS DANCE). Students who are selected through a Fall casting/audition may register for this course and receive credit for their participation in the SONG AND DANCE which will be performed in March 2014 in the Annie Russell Theatre. Course will be monitored by Rollins Dance faculty (Robin Wilson, W. Robert Sherry) in collaboration with a Guest Artist form a Major Professional US Dance Company. This season the guest will be a representative from the Jose Limon Dance Company (LimonDance.org) who will restage “THE WINGED” created by Jose Limon in 1966.

ENG 205J Yoga and the Bhagavad Gita.
A vigorous and inspiring yoga practice each morning, followed by rigorous and insightful afternoon discussions of the ancient Hindu text, the Bhagavad Gita. The Gita is the story of incarnated god Krishna helping the warrior Arjuna consider how to live fully, productively and happily in a troubled world. It is one of the earliest explanations of what yoga is.

ENG 205K Mean Girls in American Literature and Film.
So what’s up with mean girls? From Cinderella to Beatrice Bobs Her Hair to Pretty Little Liars, they are ubiquitous in American culture. Will discuss the cultural phenomenon of the mean girl, read a bit of sociology, several classic (and some less classic) short stories, a few reviews and watch films daily. Final exam will be to discuss the place of the mean girl in American literature, film and television, from The Crucible to Mean Girls. Will be asked to examine contemporary films and link them back to early American culture and literature.

ENG 232K Micropoem: Verse, Voice and the Twitterverse.
The twitterverse is a natural habitat for short poems: all posts are limited to 140 characters. This inevitably calls opens the user’s creativity—the high honor of retweeting is only afforded the most memorable. Will consider this unique rhetorical situation while also learning approaches to writing poetry.

ENG 241A From Ripley to Katniss: The Changing Heroine in Science Fiction Films.
Leia, Ripley, Trinity, River and Katniss – in a genre traditionally dominated by men, these women emerge as compelling heroines that challenge gender stereotypes. Class will explore science fiction films from Aliens to The Hunger Games and discover how these characters speak to the changing role of women.

ENG 241H American Movie Masters: The Coen Brothers.
For over thirty years the Coen Brothers have created some of the most iconic film scenes in American cinema. Class will allow students to explore a variety of Coen films, including Blood Simple, Fargo, Raising Arizona, The Big Lebowski and Barton Fink.

ENG 267G Writing Books for Children.
What do Pixar and J.K. Rowling have in common with Madeleine L’Engle and Dr. Seuss? Course will consider how the principles of writing fiction can be utilized when creating books for a young audience. Students will examine the craft of established authors and develop works of their own in response.

HIS 265I The Celluloid War:Exploring The Vietnam Conflict in Film.
What is your favorite Vietnam war movie? How close does it come to reality? How can you assess historical accuracy in Hollywood films? Class will explore the Vietnam War and the movie industry’s interpretation of the conflict.

INT 255G From Street Wear to Street Food: Redefining Narrative for the Dipset Generation.
Using the lens of contemporary culture, Eddie Huang, chef, author, media celebrity and Rollins graduate, will challenge students to think about how the narrative of their lives are defined through the food they eat, the clothes they wear, the media they consume, and the words they compose on the internet.

INT 255W Alfond and Bonner Habitat for Humanity Immersion.
Required for ALL first year Alfond Scholars and Bonner Leaders, but open to any Alfond/Cornell Scholar. Will explore issues of homelessness and poverty while working on a Habitat for Humanity project in St. Petersburg, FL. Includes one day of pre-flection on campus, three days in St. Petersburg and a final day of reflection back on campus.

LAC 205B The U.S. Drug War in Latin America: Film and Reality.
Examines the history and evolution of the U.S. Drug War in Latin America, utilizing both academic literature and film. Students will screen five award-winning documentaries and movies that depict different aspects of the drug war in Latin America. Blow (2001) and The Two Escobars (2010) depict the origins of the cocaine trafficking industry in Colombia. Traffic (2000) depicts the dilemmas of U.S. efforts at drug interdiction. Maria Full of Grace (2004) depicts the continuing lure of cocaine smuggling in Colombia. Cocalero (2007) documents the rise to power of Bolivian President Evo Morales.

POL 205B Disney and the City
Course assesses the Walt Disney Co.’s contribution to planned urban development. Drawing upon the instructor’s book, Married to the Mouse, the course examines the design features of the Magic Kingdom viewed as a controlled urban environment, compared with the planning and design of Epcot, the Disney new-town Celebration and Orlando’s International Drive, taking fieldtrips to all four places. The key question of the course is pertinent to city-building worldwide: namely, whether Disney-style developments founded upon centralized control are superior to urban environments built under the fragmenting conditions of capitalism and democracy.

POL 205G Reality 101: Money and the U.S. Political Economy.
Do you know what FICO sex is? Do you know how to read an Explanations of Benefits form? Have you considered whether you have sufficient cash savings before you pay into retirement? Do you know the difference between the debt and deficit? Be a responsible citizen and take this course in order to understand how political and personal decisions affect the well-being of people. Become informed before you graduate!

POL 205I Hot Issues in American Politics: From Abortion to Immigration Reform.
Explores ethical and constitutional arguments for and against the most controversial political issues in American society today, including abortion, the ethics of immigration reform, free speech and pornography, presidential war powers and more.

PSY 205I The Mind in the Machine.
From Fritz Lang’s Metropolis (1927) to Ridley Scott’s Prometheus (2012), portrayals of artificial intelligence in film reflect cultural ambivalence towards technology and shifting views of human nature. Analyzing a variety of AI in film, we will use the “non-human” to gain a better understanding what it means to be human.

REL 251I Religion and the Human Condition: New Religions and Society.
Course will look at the social, economic, and political pressures of the modern world that lead to the creation of New Religious Movements. Will focus on the three areas of the world most associated with New Religions: Asia, Africa and North America.

SPN 205I Cuba and the U.S.:Yesterday, Today and Tomorrow.
The year 2009 marked the 50th anniversary of the triumph of the Cuban Revolution. Will examine the political and cultural changes that have taken place on both sides of the Florida Straits as a result of this historic event.

THE 350H Clean House: Dramaturgy and Development.
Course prepares students for the upcoming production of The Clean House through dramaturgical analysis, character and script exploration, historical research, and rehearsal practices and applications. Enrollment is limited to students actively involved in the spring production. Register in department.

THE 350N Leadership and Ensemble Building Through Long-Form Improv.
Course examines the concepts of leadership and ensemble within the creative site of long-form improvisation and develops the interpersonal tools, techniques and doctrines that enable focused group play in both existing and new performance structures. Prior improvisational experience is helpful but not necessary.