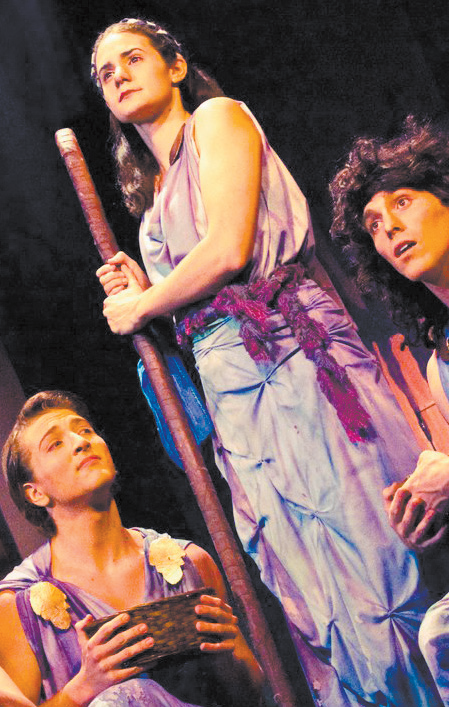 It’s All Greek to Me

After almost two months of extensive rehearsal, It’s All Greek to Me finally arrived at the Annie Russell Theatre. It is a rather difficult show to review because each performance differs from the last. Just to recap, Greek, as it is more commonly called, is an improvised Greek tragedy. Before the audience members enter the theater, various cast members run around with clipboards, talking to them like they are students about to enter a lecture hall. The show then opens as a class taught by Associate Professor David Charles, aka Dr. D, but it morphs into a full-blown, and completely improvised, production.

Dr. D, along with several research teams and various individuals, began the concept of Greek two years ago. After an ample amount of research on Greek tragedies, a trip to the country itself, and a lot of editing, they finally produced the outline for the show. Amanda Leakey ’11 and Shannon Singley ’11, members of the research teams, said that the first summer they began working on Greek, the question was, “can this be done?” The second summer they worked on it, the question became “can this be done well?”

The answer is yes, it was done and it was done well. Each night the cast focused on a different tragedy and rotated so that usually only two or three people played the main characters, then the remaining cast played the chorus. The actors were extremely receptive to the audience’s suggestions, which is how characters like “Disneyopolis: one who has lots of fun,” and “Fireworkicles: one who brightens the sky,” came to life. Along with the full-size set pieces and the authentic costumes, the show was also complete with musicians and the Wheel of Fortuna, spun by an audience member.

Cast members were exhilarated after the shows, happy to finally be presenting to campus the product of their hard work. “Having worked on this for two and a half years and seeing it come to life, it’s unreal. I’m speechless,” said Leakey. Brian Hatch ’12, who was also involved in the creation of the show, agreed. “Most of the time you’re given a script to work with, but this time I actually got to see it happen,” he said.

“I know I’m extremely proud to be part of a cast that grew so quickly and became such an awesome product. It makes me excited as a freshman to know that there is more like this to come,” said Brett Miller ’14. Charlie Jicha ’11, one of the set designers, loved working on this project because of set opportunities it presented to him. “Technical wise, it was really fun to defy physics with the Wheel of Fortuna.”

The ensemble members are one of the best parts of the show, who provide the background information for the story and hold the plotlines together. “I’ve never been in an ensemble that is so loving and trusting,” Kaitlin Schirard ’12 agreed. “We can take beautiful risks together.” Having watched a few rehearsals as they were learning how to move as a unit and speak in unison, they have achieved a great feat. Even when they make mistakes, they make up for it in energy and in dedication to their roles.

What sets this show apart from most performances is its authentic nature. The people in the orchestra pit are constantly in motion, taking the audience’s suggestions and projecting them onto the set pieces for the actors to use. The actors are continually changing their costumes as they step into different roles. And the twists and turns that come merely from improvising an entire show keep things interesting. I recommend going to see Greek, even if you have little interest in the ancient culture, because though it is presented as a lesson, it is difficult to remember that once the actual show begins. The show will continue its run April 21 to 23.