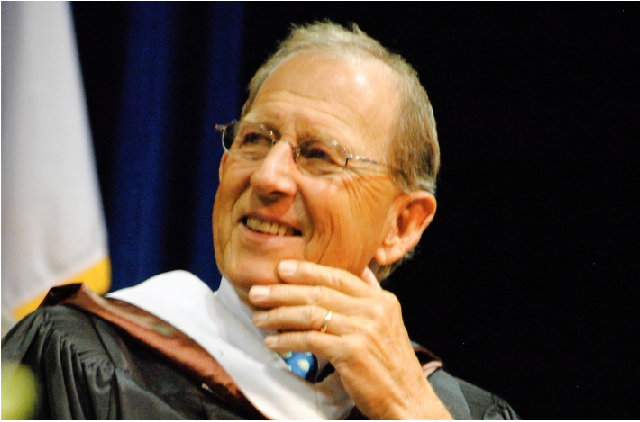 Legacy of Dean Erdmann Lives On

Two summers ago, I attended Discover Rollins upon the insistence of my parents –and if I’m being brutally honest, they were definitely more interested in seeing the campus than I was. We ended up getting lost somewhere around the old Bush building ( yes, I have been lost on campus before. No, you shouldn’t laugh.)We were already late for Discover and had no idea where we were supposed to be when two gentlemen, sensing our panic, approached us, asking if they could be of assistance. They were wearing suits and official looking nametags, and they clearly were people of high importance. They escorted us over to Alfond–the wcome–chatting about the college and pointing out Knowles, Bush, and the Annie. They asked me what subjects I was interested in, where I went to high school, what I wanted in a college, and when we arrived at Alfond just as the tours were starting, they wished us a nice day.

It wasn’t until later that afternoon when my parents and I sat down for a panel that we realized the two gentlemen from earlier were Lewis Duncan, the President of the College, and David Erdmann, the Dean of Admission. My parents looked at each other and then at me, and we were all completely floored that these two important men took the time out of their busy day to walk us to where we needed to be, when they easily could have just pointed us in the right direction (and let’s be real, Rollins isn’t very big, and our getting lost was kind of pathetic.)

When the panel ended, Dean Erdmann approached me, calling me by name (He remembered?!?) and asked if I had everything I needed. My welcome folder had been misplaced and never found, but I had all the information handouts and pamphlets, so it was okay. My mother, ever the jokester, piped up that the only thing we were lacking were the cool fans (you know the ones they pass out for tours because we live in Florida and it’s hot.) We assured him that it was fine, not to worry, and we thanked him again for his time.

I received an envelope in the mail two weeks later, hand addressed from Rollins College. Inside the envelope was my missing folder, and inside the folder was a note, handwritten:
“Ms. Bryant, I was able to track down your folder. I hoped you enjoyed your visit to Rollins. P.S. I included an extra fan so you and your mother each can have one. Kind regards, David Erdmann.”

Dean Erdmann passed away last week, and I never got a chance to thank him for everything he did for me. He probably didn’t even realize how much his kindness meant to me because that’s just how he was: kind, and thoughtful, and passionate about his work. I’m not saying Dean Erdmann was the sole reason I came to Rollins, but I will say this: he certainly made me look twice at the school that would eventually become my home.