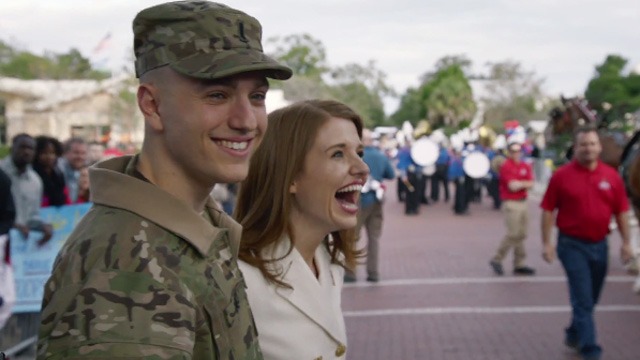 Star SOLDIER Chuck Nadd does not consider himself a hero but received a grand welcome home celebration in Winter Park.

I met Charles Fiodor Nadd* in the sixth grade at Trinity Preparatory School where we spent the next seven years as classmates. Chuck/Charles/C.F. Nadd/Nadd was known by everyone at our school as the kid who wanted to be president one day. Though he has not fulfilled that dream yet, Nadd was recognized on a national level as the soldier featured in the Budweiser “A Hero’s Welcome” 2014 Super Bowl commercial.

Since day one, Nadd has been enthusiastic about every subject. I remember sitting in seventh grade French with him as he exclaimed with pride that he had never had soda. Enthusiasm for the fairly mundane was nothing compared to the way he always spoke about the United States. Nadd went on to eventually become our senior class president with the campaign slogan, “Go Nadd!” In high school, that’s a slogan that just can’t lose.

Maybe it’s his French heritage, but now a first lieutenant in the U.S. Army, Nadd has always had a great amount of joi de vie. I heard a few days before the Super Bowl that he was going to be starring in one of Budweiser’s commercials. I knew from the moment I heard about it that it would be something special. I jumped at the chance to speak with him on the subject, and he graciously answered my questions.

On the subject of his welcome home parade, he said, “I was told that I would be part of a documentary on soldiers returning home.  It was a shock to see Winter Park out in full force to welcome me home!” I have to say that the Budweiser commercial featuring his welcome home parade made me tear up a little. It had such a great message.

His girlfriend, Shannon Cantwell, found out Budweiser was shooting a documentary and unbeknownst to him, submitted a packet. Nadd logged almost 250 hours of combat flight time during his tour in Afghanistan, but emphasized fervently how much more so many have given. He served as a Black Hawk helicopter pilot and operations officer coordinating movement of personnel and material throughout eastern Afghanistan.

We owe so much to our soldiers. It is so touching to see all the support that First Lieutenant Nadd received upon his coming home. He does not consider himself a hero, but he has a moving notion of what a hero is.

“A hero, I think, is someone who puts him or herself on the line for someone or something: a loved one, an idea, a way of life. I don’t think I’m really a hero because so many have given so much more than I did. Over the course of the last twelve-plus years, there are folks who have deployed two, three, four, or even five or more times. Many have come back seriously injured, and some have not come back at all. They are the heroes. “

Though Nadd has no current plans to go into politics, I think he’d be off to a solid start if he were to change his mind. Truly diplomatic and, let’s face it, perfectly groomed for a career in politics, Nadd had this to say about his country: “The United States’ greatest strength is her people and their belief that they can create change and a better tomorrow for the next generation. My parents immigrated to the U.S. because they saw this country as a beacon of light: dreams become reality in a free society like ours. We live in an often-cynical age, so many folks might dismiss that as a platitude, but I really believe that. We’re a hungry people; regardless of where folks stand politically, almost everyone wants to build on what we have and make the world a better place. What we need to work on is rebuilding a sense of community, that we are our brothers’ keepers. I think that’s been lost in many ways in recent years, and it’s absolutely essential that our generation brings it back.”

And just in case you are curious, he loves Budweiser. I wouldn’t have thought there would be a commercial produced for the Super Bowl that was more heartwarming than the one Budweiser released starring a puppy and a Clydesdale; but “A Hero’s Welcome” really was the most touching. Every soldier deserves a hero’s welcome.

Watch the full story of the “A Hero’s Welcome” video below.