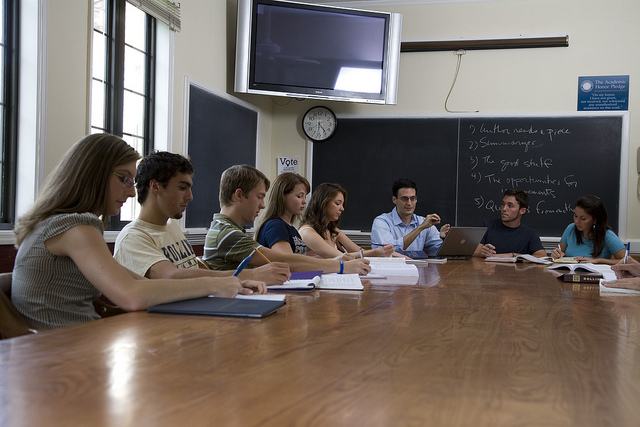 Rollins students who qualify for disability accommodations now have access to Livescribe Smartpens, a new note-taking device. The introduction of the Livescribe Pen is well-intentioned, yet students still dependent on the previous peer note-taking system are experiencing some issues.

Since the beginning of this year, the pens have provided free of charge and are moving to replace the existing peer notetaker system. The decision to start providing the devices was made Rollins Accessibility Services Office (formerly Disability Services) in conjunction with the Dean of Students Office sometime last year.

The pen’s technology, which is manufactured by Anoto Group AB, allows students with accommodations to digitally record their analogue pen strokes, allowing students to maintain a digital record of all their notes while still writing in a traditional paper notebook. In addition to that is the ability to take an audio recording of lectures and in-class discussions. While reviewing their notes, these two aspects of the technology come together in a powerful manner.

Students are able to select a written word and the pen will bring up the exact time in the lecture recording that the word was written. This allows students to, in the words of the Livescribe website, “write less and listen more—knowing their smartpen will capture everything”.  According to Accessibility Services, “the pen allows for increased possibilities that are within the control of the accommodated student.”

The pens were brought in with careful consideration. Accessibility Services tested the pens in the spring of 2017 with a focus group of interested students who reportedly appreciated the flexibility of the pen. Livescribe Smartpen technology is considered a best practice among accommodation specialists and they are offered at institutions nationwide.

Student who tested the pens, along with accessibility staff, see independence from peer-notetakers (who, as college students, are sometimes less than reliable) as the biggest strength of the pen. Not only does independence from peers increase reliability for students seeking accommodations, according to Accessibility Services, it also provides an opportunity to learn and practice “organizational skills that carry over to life after graduation, where there would most likely not be many opportunities for peer note-taking services.”

In addition to this, the Livescribe system is less expensive per student than using a peer notetaker system. This is because students only need to be provided with one pen, while students using peer notetakers need an average of three to five peer notetakers per semester (who are compensated with $225 by the school).

Accessibility services is aware, however, that this technology will not prove helpful for all students. “As with all accommodations we recognize that there is not a one-size-fits all solution, and the pens may not be the best accommodation for every student. Accessibility Services is committed to working with students to provide appropriate and reasonable accommodations to fit their individual needs.”

That being said, there are some unfortunate results for students who will continue to use peer notetakers. As stated previously, there have been problems in the past concerning the reliability of peer note taking, and there is currently further decreasing overall reliance on the system due to a personnel transition. One student, Charlotte Pope ‘18, who still relies on peer notetakers to accommodate for her disability, has complained of newfound difficulty in securing a peer note taker.

According to Pope, this semester she has received a peer notetaker for a class she isn’t enrolled in, and only recently was assigned a notetaker for “the class I needed it most in…AFTER OUR MIDTERM.”

Pope stressed that while she harbored no animosity towards any Accessibility personnel, she came to Rollins primarily for the strengths of the school’s accommodations, and that seeing this critical tool disappearing in her last semester on campus was worrying.