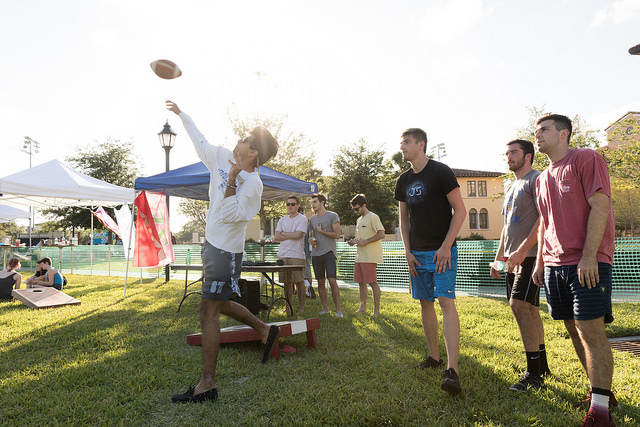 The Student Government Association (SGA) hosted Homecoming Week last week with the goal of progressing the events to be more oriented toward student-to-senate communication.

This year’s line-up included FoxFest, Tar Tailgate, Jumangi on Mills Lawn, and Halloween Howl. SGA’s Public Relations chair, Doragnes Bradshaw ‘18HH explained that SGA’s goal was to have “as many activities in the week that would get people together and build community” as possible. Therefore, SGA worked with many campus organizations to initiate collaboration.

FoxFest (a music festival on Mills Lawn) was presented with a partnership with WPRK, our student-run radio station. The Tar Tailgate joined forces with the Office of Fraternity and Sorority Life (FSL); Jumangi was co-hosted with Rollins Entertainment Players (REP), and Halloween Howl is an annual event hosted by the Center for Leadership and Community Engagement.

The arrangement of this week’s events differed from last year’s inaugural Homecoming. Last year’s students participated in events throughout the week, all leading up to the final event, which was a Homecoming Dance. The dance occurred at night and offered a DJ, a full dance floor constructed on Mary Jane Plaza, twinkle lights, and finger food. Most participants dawned cocktail dresses or button-up shirts.

Despite an enjoyable event, it was not well attended. Therefore, the removal of this event from the line-up was intentional. The tailgate became the central event of the week instead of the dance in hopes of moving away from pressures that come with a formal event. Bradshaw explained that SGA’s intention with the tailgate was to have “more people comfortable participating, by partnering with FSL…and having a cause behind it.”

SGA found that the formality of last year’s dance “didn’t draw as many people” and was more expensive. According to Bradshaw, the tailgate “gave us an opportunity to talk to more people about life at Rollins,” and it was “more low-key, more fun.”

The event was a success and a cause was achieved. According to an email from the Office of Fraternity and Sorority Life, 650 pounds of canned food was collected and donated to United Against Poverty, a local Orlando organization serving those in poverty. Furthermore, Madelyn Wilson ’20, a member of Alpha Delta Pi, said that SGA “had a presence” at the event and “judged the food,” which was prepared by paired fraternities and sororities.

In closing thoughts, Bradshaw emphasized the encouragement of student body attendance at the SGA meetings. “People should feel welcome” to come. Especially if they “have concerns or want to see change.” SGA specifically promoted the attendance of one of their meetings, which fell during Homecoming Week. Bradshaw shared that they saw a “15 percent increase in those that attended,” which they were pleased about. Students are always welcome and encouraged to attend the SGA meetings.

The whole team of SGA senators and the executive board worked hard to make this year’s Homecoming Week more collaborative and to create more of an approachable air to their presence on campus.