By Christina Fuleihan on November 3, 2016 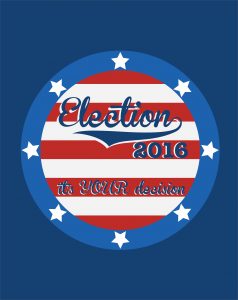 Voting has long been a symbol of maturity, responsible citizenship, and democracy. It is as much our duty to vote as it is our honor. For new voters, however, voting is also a right of passage symbolizing our entrance into mainstream America. We are no longer the youth of tomorrow. We are now, officially, the citizens of today. For many of us, this election will represent the first presidential election we find ourselves both actively participating and voting in.

Eight years ago, a monumental election brought us the first American president of color. This year, we find ourselves trying hopelessly to decide between the “lesser of two evils.”

While the first female president is also on the ballot this year, there have been a series of scandals and errs in judgment on the part of this year’s two main contenders for the presidency that are unforgivable. Furthermore, these scandals have seemingly sullied the entire election and presidential race for the new populous of American voters.

I used to have a high-school American History teacher who claimed that every politician was a liar by nature of the craft, and no one would seek the heavy responsibility of the presidency unless they were actually crazy.  I must disagree, because, optimistically, I hope to trust that the politicians we elect properly represent our democracy and what it stands for.

A president should be a leader we can depend on; neither an entertainer, nor a hypocrite. If, as the media loves to claim, Clinton is a “liar” and Trump is “crazy,” it is a shame that we must settle for either candidate to represent our great country and miss seeing justice and fair representation carried out regarding some of the most controversial issues of today.

We are not expecting a perfect president, but we do need a president that the majority can believe in and most of the minority can at least settle with. We are now faced with a decision that will change the face of American politics for the next four, possibly eight, years.

Unfortunately, no candidate seems to have risen above the “dirty politics” of it all.  Therefore, we find ourselves voting for the issues rather than the party candidates. We find ourselves having to sacrifice some of our beliefs in favor of supporting our stances on the issues we believe to be most crucial.

The majority of college students may be disappointed that this will be “our first real election.” Regardless of whether or not we can fully support one candidate, it is imperative that we do vote.

It was the firm belief of my American History teacher that we do not earn the right to criticize the next president of the United States of America unless we actively vote. Democracy will stand as long as we let our voices be heard.  Remember, there are always third-candidate options for those who cannot bring themselves to settle.