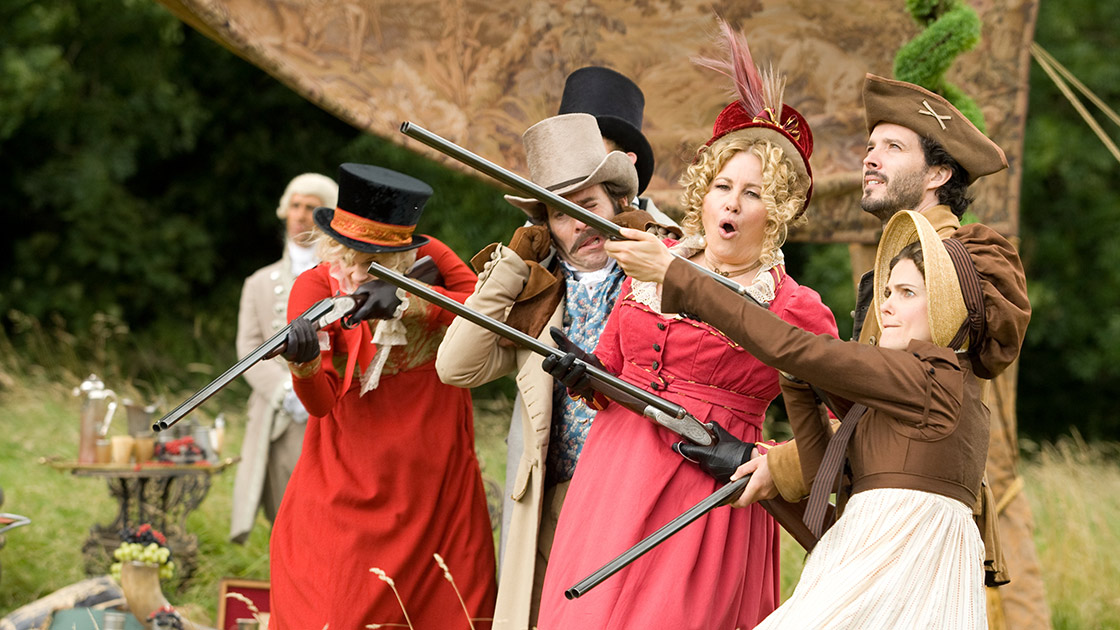 Look out  Clueless  and  Bridget Jones’s Diary;  Austenland  is shedding new comedic light on the Jane Austen phenomenon. Revamping the novelist’s romantic classics, Austenland  laughs at the elegant manners and matchmaking essentials of the regency era.

The film focuses on Jane Haynes (Keri Russell)— an Austen obsessive displeased with her disastrous love life. To escape her disappointments, Jane ventures off to an English theme park known as Austenland. The fictional paradise offers an immersive Jane Austen experience where visitors reside in a grand estate, dress in fluffy petticoats, and are courted by paid actors. Austen fanatics can rejoice, as familiar plot lines from Mansfield Park and Persuasion seep into the 21st century narrative. Directed by Jerusha Hess, creator of Napoleon Dynamite and produced by Twilight author Stephenie Meyer, Austenland respects the 19th century novels enough to poke fun at its zealous following. The cast milks the rich satirical material for all its worth. Centuries after  Sense and Sensibility, snobbery and arrogance live on, even at a summer camp for Austen addicts where the only customers are Americans—two out of the three pretending tragically to be British.

The heroine, Jane Haynes is relatable when her adolescent dreams fall flat after pouring her life savings into a literary resort. Audiences follow Jane’s hilarious journey as she questions reality and fiction—feeling torn between her staged lovers, Mr. Nobley (JJ Field) and Martin the groundskeeper (Brett Mckenzie).

At moments, the film’s goofy tone may seem unbearable, but the romantic comedy is crass-free and playful. Though the film advanced from non-original material, the cinematic treat was a creative and unexpected revival. Providing audiences with something old and something new,  Austenland  is a modern spoof instilled with romantic roots. Whether a moviegoer is a Mr. Darcy groupie or rookie to the Austen book club, anyone can appreciate an irresistible parody with a pinch of social commentary and a happy ending.