Moving Rollins into the future 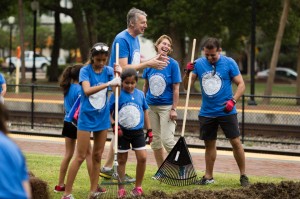 On April 2, 2016, President Cornwell’s Inauguration began with a Day of Service. Not even the rain could damper the spirits of members of the Rollins community as they participated in various projects ranging from the beautification of Central Park, a Habitat for Humanity build-out, and the Welbourne Avenue Nursery clean-up. To exhibit Rollins’ interest in the well-rounded individual, other events of the week included Research Scholarship and Arts Showcases, panels on “What Matters in College” and “Liberal Education in This Global Era,” and a two-hour Inauguration ceremony. The week concluded on the night of April 9 with a fun-filled Festival of Light.

“An inauguration is really a time for a college to take stalk at itself, ground itself in its mission, reflect on its history, and imagine its future,” said President Grant Cornwell, who appeared especially humbled by the greetings expressed by a number of his colleagues at the Ceremony.

Daniel Sullivan, who serves as the President Emeritus at St. Lawrence University, for instance, described Rollins’ 15th President as “another giant from the North Country” whose “fingerprints [can be found] everywhere in [some of] the most important places” at St. Lawrence’s. He said, “I predict that the results [of Cornwell’s leadership] will be absolutely terrific. . . Go Tars!”

Both nationally and internationally recognized educational leaders participated in this stepping stone for Rollins College, and the future looks bright. The theme of several events as well as President Cornwell’s inaugural speech emphasized the importance of a liberal arts education, not only in upholding Rollins’ mission of global citizenship and responsible leadership, but also in providing employers, and more importantly society, with tomorrow’s groundbreakers.

“There is a trend [for liberal education] around the world explicitly passed on to universities such as the American University of Beirut, American University of Cairo. . . but that wave of founding was typically created by missionaries to spread the faith. At this very moment, the model of liberal arts is being questioned,” said Dr. S. Georgia Nugent, Interim President of the College of Wooster, as she began the panel on “Liberal Arts Education in the Global Era.”

Through acquired critical thinking skills and transformative leadership that the liberal arts provide, however, “liberal education embraces diversity and creates fuller, more successful communities. There can be no higher calling or higher value than kindling that light in students to become conscious of their choices and the consequences of those choices,” said Dr. Cary Geary Schneider, President of the Association of American Colleges and Universities, upon introducing President Cornwell. 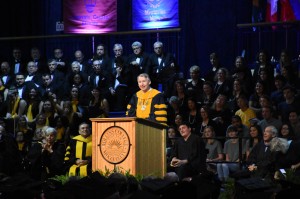 Schneider also expressed high hopes for Rollins and the liberal arts under the guidance of Cornwell, “Your president, in sum, is both a product of and a practitioner of liberal education at its finest…at once a testament to the importance of liberal education and an advocate for its necessity.”

President Cornwell’s passion for the liberal arts model of education is unquestionable.  “One mission, One Rollins,” declared President Cornwell during his inaugural speech. He continued, “At Rollins, we continuously innovate and reinvent our approach to liberal education because we believe in our approach.We proudly declare our mission, our reason for being. And we will continue to declare it, boldly proudly and exceptionally well, [while demonstrating] the value of this work by the the good work of our alumni and students.”

Throughout his speech, President Cornwell continuously quoted John Dewey and Hamilton Holt in expressing the necessity of a pragmatic approach to learning that focuses on “mentorship” and the “true vitality of thought as it emerges from collaborating across differences.”  After all, “a liberal education does not reduce to job training, but draws upon qualities sought by employers.”

As Rollins works in the coming years to become one of the top leading liberal arts institutions in the United States, we may just see our college grow faster than we had thought possible.  The inauguration of the 15th President of Rollins College marks a peak in the school’s history as an established liberal arts institution, and, in our institution at least, we can expect to continuously see a growth in the “experimental learning” that is the liberal arts.  As Dr. Cary Geary Schneider concluded, “The next chapter begins here.”