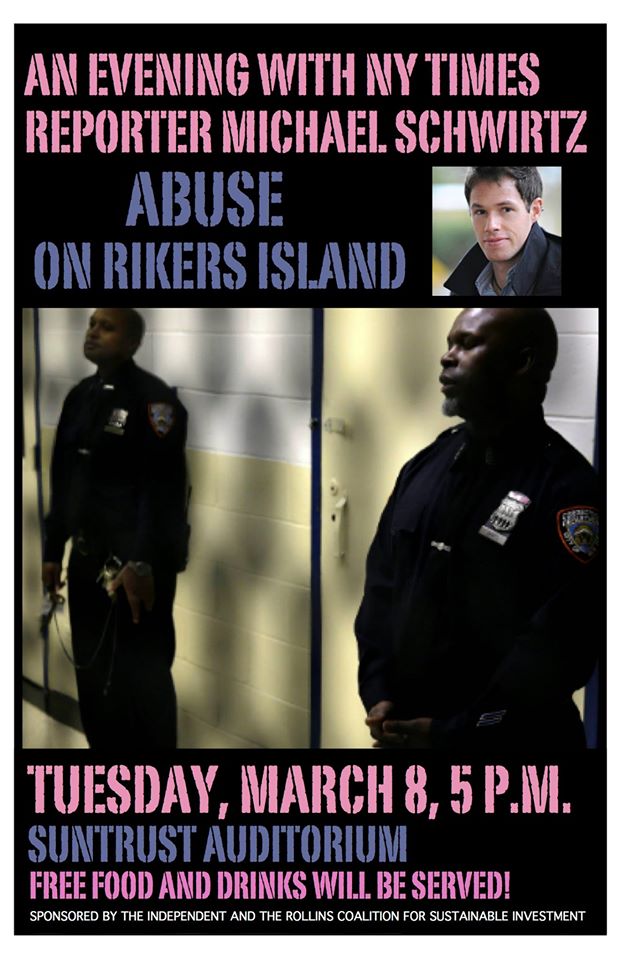 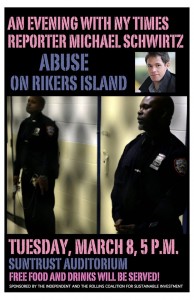 On March 8, a writer for The New York Times visited Rollins in the Suntrust Auditorium to discuss his research on Rikers Island. Rikers Island is in New York and is home to ten jails for prisoners who have not been convicted and are awaiting trial  or cannot afford to pay bail.

Schwartz is known for his research that revealed a history of violence and abuse toward the prisoners on Rikers Island, many of whom are mentally unstable or being held for petty crimes. Main topics in his discussion included corruption in the criminal justice system and massive flaws that have yet to be solved.

Many mentally impaired prisoners are sent to Rikers Island due to the shutdown and cost of mental institutions in the United States, meaning that both those convicted of petty crime and those who have been declared mentally incompetent are put into the same environment.

Rikers is unable to meet the needs of some prisoners’ mental conditions, creating chaos and instability in the infrastructure of and daily life within the jail.

Schwartz’s writings focused on exposing the abuse received by the prisoners from the guards within Rikers. Stories of men being handcuffed to chairs or strapped to beds then beaten senselessly were very common throughout the discussion.

Originally, Schwartz and partner Mike Winerip had intended to research the mental health of prisoners, but soon discovered the brutality being experienced at Rikers Island. Their works exposed this violence to the public.

Schwartz claimed that progress has been slow, but it is happening, and he remains confident treatment of inmates will be improved at Rikers.

Over 80,000 prisoners filter in and out of Rikers Island every year, meaning many are witness to the behavior at the jails. Some guards have even been given jail time due to their treatment of Rikers’ prisoners, but these moments of justice are rare scenarios.

Schwartz was able to hold a very interesting conversation with Rollins students and staff about the justice system and its flaws. His explanation of the overlapping effects of racism, lack of job opportunities after prison, and mental impairment within the system brought attention to America’s severely flawed system.