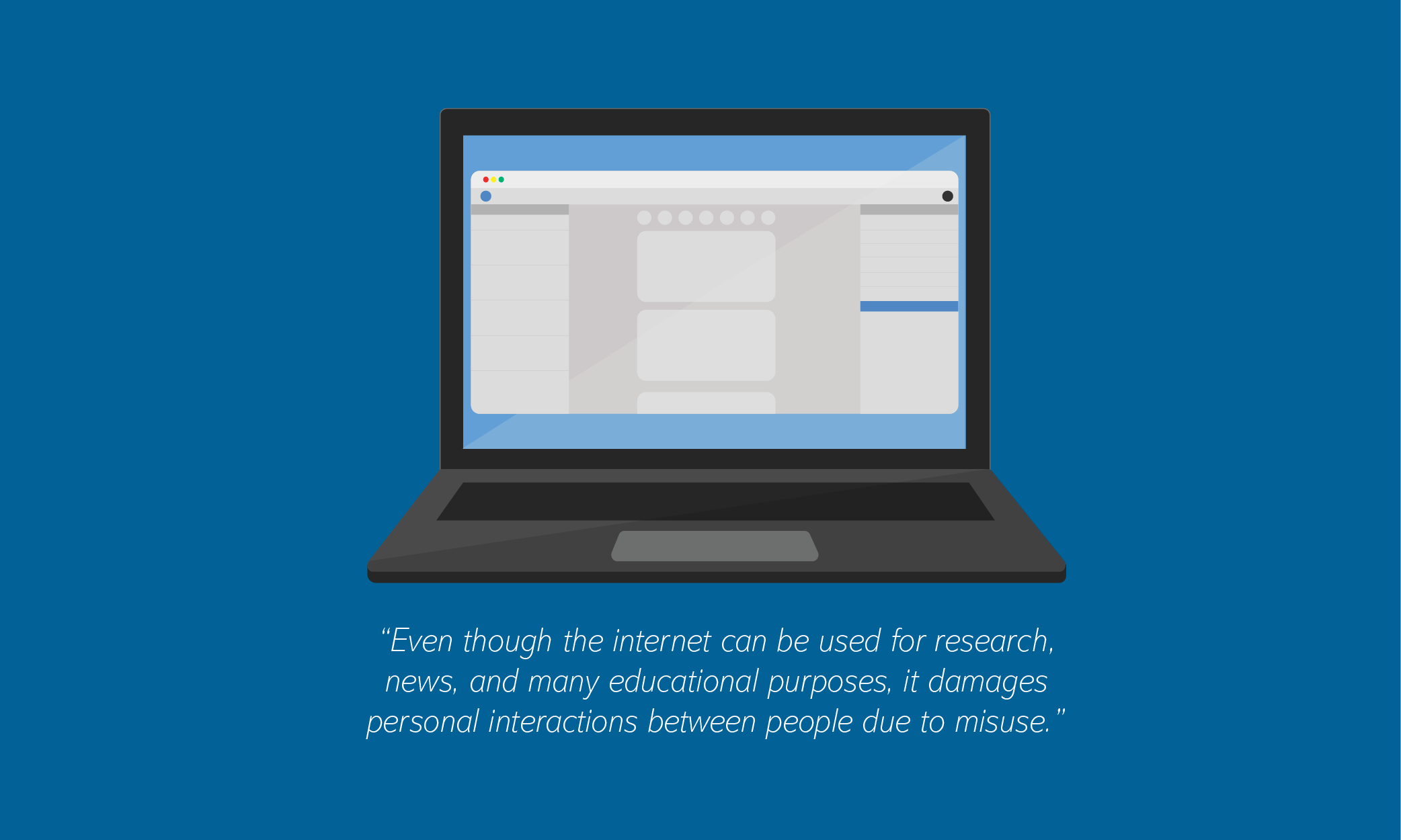 The internet has been damaging personal interactions for the past decade. About 15 years ago, parents would calm down their younger kids by interacting with them and giving them more attention.

Today, we see those interactions diminishing. Parents tend to calm down their younger kids by giving them virtual devices so that they will get distracted by playing games or watching videos. The internet is now seen as unlimited, where you can get access to almost everything, even misleading information.

The misconception of internet use has been damaging Gen Z due to their lack of personal relationships.

“About 53 percent of the United States population have smartphones by the age of 11,” said Anya Kamenetz, an education correspondent at NPR. “And 84 percent of teenagers now have their own phones, immersing themselves in a rich and complex world of experiences that adults sometimes need a lot of decoding to understand.”

Studies have proven that the solution for social media and online video gaming addiction is  doing one thing: decreasing online usage.

From an early age, teenagers are expected to have a smartphone and use the internet daily, including social media.

Social media refers to the means of interaction among people in which they create and share information and ideas in virtual communities.

Clarissa Silva, a behavioral scientist, relationship coach, and creator of the H2O Method, explained that social media has been linked to high levels of loneliness, anxiety, jealousy, depression, narcissism and decreased social skills.

The study shows how social media harms active users’ personal lives and relationships. If people were to pay less attention to what others have to say about their recent Instagram post or latest TikTok video, they would pay more attention to what is going on in their surroundings. Instead of spending six or more hours per day on your smartphone, make plans with friends and enjoy nature!

The video game world is appreciated by almost every teenager in the world, but hated by nearly every parent. Dr. Douglas A. Gentile, director of the Media Research Lab at Iowa State University, said, “Almost three-fourths of boys say they enjoy playing video games ‘a lot,’ whereas fewer than 1 in 4 girls say the same.”

Gentile continued by saying, “Video games are the online activity most associated with problematic overuse or addiction.” Aside from proven research stating that online video games enhance violence and mislead teenagers, video games have also created insecurity, depression, and social anxiety in teenagers.

Social development ensures a safe and healthy relationship with individuals, which online gaming prevents. The more time teenagers play video games, the more it creates an addiction, leading to little or no social skills. Video game usage should be reduced so teenagers can create personal interactions and build real human connections.

The damage caused by internet overuse is a wake-up call to Gen Z teenagers. Even though the internet can be used for research, news, and many educational purposes, it damages personal interactions between people due to misuse. These issues have caused higher numbers of social anxiety rates as well as discomfort when socializing.

Social media has become a judgmental platform that makes people insecure when interacting in the real world. Video games have prevented the development of social skills and have become addicting.

The solution is simple: set time limits on particular apps and devices and decrease your overall usage of the internet. Try to live your everyday life to the maximum and enjoy the time you have with your loved ones. The internet will always be there; people won’t.