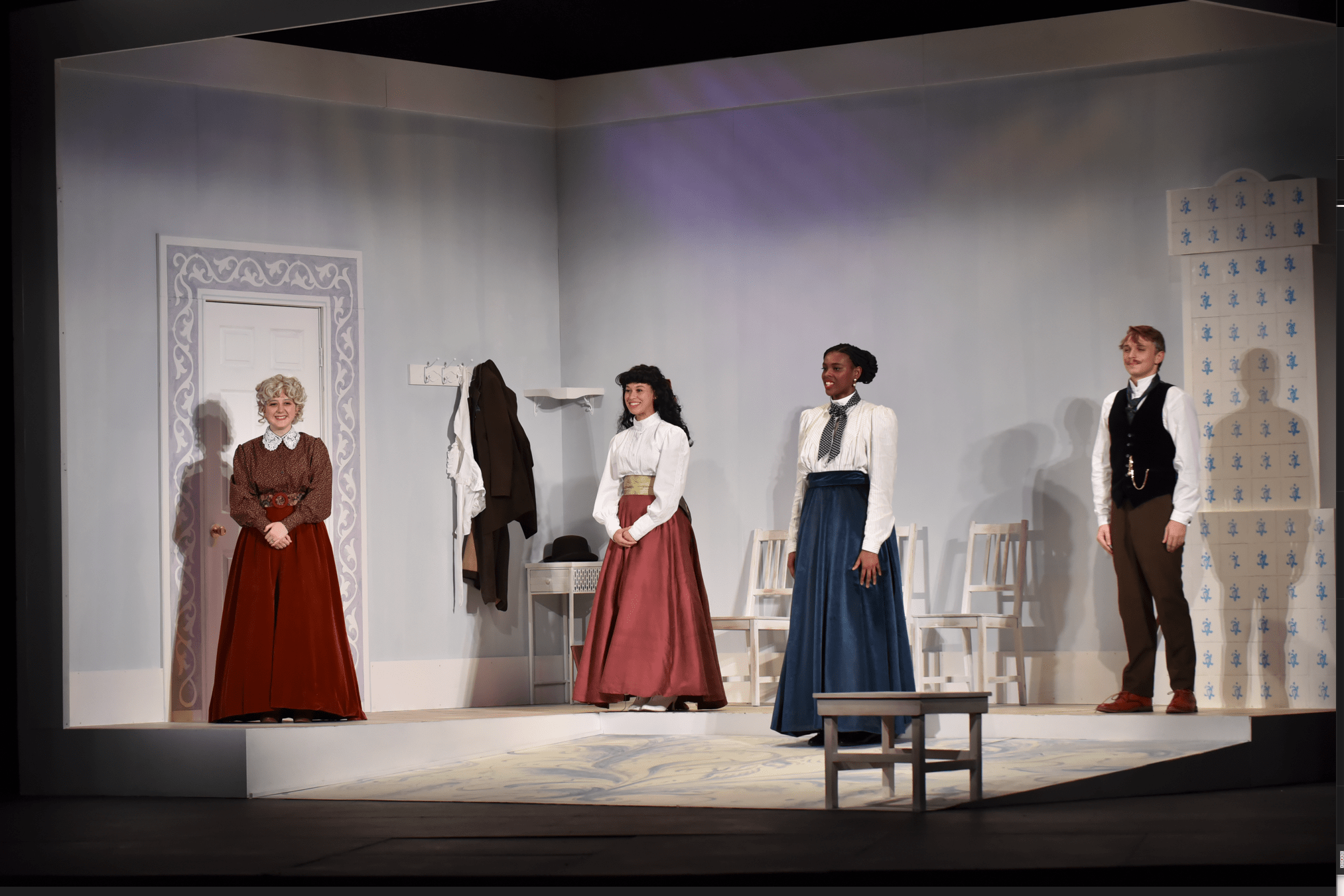 By Arabella Lilleslatten on October 7, 2022

As the audience strolled out after the Annie Russell’s production of “A Doll’s House, Part 2,” I overheard a patron jest to her friends: “Did people say ‘shit’ so much back then?”

Unlike “A Doll’s House,” the 19th century play by Henrik Ibsen, “A Doll’s House, Part 2” was written by Lucas Hnath, and premiered in 2017. It is a quippy, provocative continuation of Ibsen’s story, where an ex-housewife named Nora returns to face her husband and family after leaving them 15 years prior. And yes, the word “shit” is uttered a few times.

The Annie Russell Theatre opened their 90th season with a beautiful, minimalist set designed by Lisa Cody-Rapport: the inside of a home with baby blue, barren walls. Melancholy music floated between each scene, from Sound Designer Robert Miller, as Kevin Griffin’s lighting polished off the picture of a broken home. Each female character sported velvety skirts of varying colors, and all wore intricate Victorian-era costumes, courtesy of Allison Crutchfield.

A star-studded cast of Rollins students, under the direction of Thomas Oulette, brought maturity and authenticity to their roles, with Ani Henry-Walker as Nora, Nicholas Juergens as Torvald, Analise Cutter as Anne Marie, and Kalani Senior as Emmy.

Nora’s transient story of a woman getting punished by the masses for seeking to liberate herself from an unfulfilling role as a dormant wife, evoked the same questions I was rehashing the day before after watching the buzzing film “Don’t Worry Darling”: Will women always be disparaged for rejecting roles of motherhood and domesticity? Is a cookie-cutter, utopian relationship really something to strive for? Should we suppress our aspirations to benefit others? Is Harry Styles a good actor?

Evidently, not enough has progressed since the late 1800s to quash the intense relatability and relevance of Nora’s story. One of her last lines to Torvald says: “And even though I was living by myself – for everything I did – every decision I made, from what I ate to when I went to bed – I could hear a voice in the back of my head that either sounded like you or my father or my pastor or any number of other people I knew – I’d always in my head somehow manage to check with that person to see what he thought, even though that person wasn’t a person but my thinking of that person … So I find that I’m best – that I’m my best self if I’m by myself.”

Torvald bites back at Nora with some valid points, claiming that his “masculine” self-assuredness is what attracted her in the first place, though she now condemns it. In the spinoff, Nora abandoned her children to become a successful writer. In Olivia Wilde’s “Don’t Worry Darling,” Alice, played by Florence Pugh, doesn’t want children at all.

She lives with her husband Jack in an “ideal” 50s community, where the wives clean and cook all day in order to support their husbands. Of course, Alice is not entirely fulfilled by this duty. In a particularly intense scene, Chris Pine’s character spits out: “And yet, here you are preparing dinner. Like a good girl.”

Neither of these stories were considered by critics to be brisk or absolutely enthralling throughout their entirety, in part because of their resonance in the real world. You’re not watching Spider-Man jump from building to building to save a damsel, you’re looking into the lives of two women who are severely limited in their choices because they have to answer to men.

It’s understandable, then, that the premises of both stories initially received overwhelmingly negative reactions from critics, while capturing everyones’ attention(although Mr. Styles’ spitting and dating rumors undoubtedly had something to do with the film’s virality).

“A Doll’s House,” which is the inspiration behind Hnath’s play, quickly sold out all of its initial 8,000 printed copies when it was published in Copenhagen in 1879. According to Encyclopedia’s educational magazine regarding Nora, Ibsen’s “decision in Act III to have her abandon her marriage and children was lambasted by critics as unrealistic, since, according to them, no ‘real’ woman would ever make that choice.”

At time of writing, “Don’t Worry Darling” has a 39% rating from critics on Rotten Tomatoes. According to USC News on a study of 2017 film reviews,  “results emerged when the researchers focused on individuals who Rotten Tomatoes has designated as ‘top critics.’ Of the 3,359 reviews by those top critics, 76 percent were written by males and 24 percent by females.” You know what they say—one man’s “slow-burning” film is another woman’s reality!

Conjectures aside, both “A Doll’s House, Part 2” and “Don’t Worry Darling” provide thought provoking and controversial, bold commentaries on the real world. And for now, the world is failing to prove them wrong. “Shit.”

The opinions on this page do not necessarily reflect those of The Sandspur or Rollins College. Have any additional tips or opinions? Send us your response. We want to hear your voice.