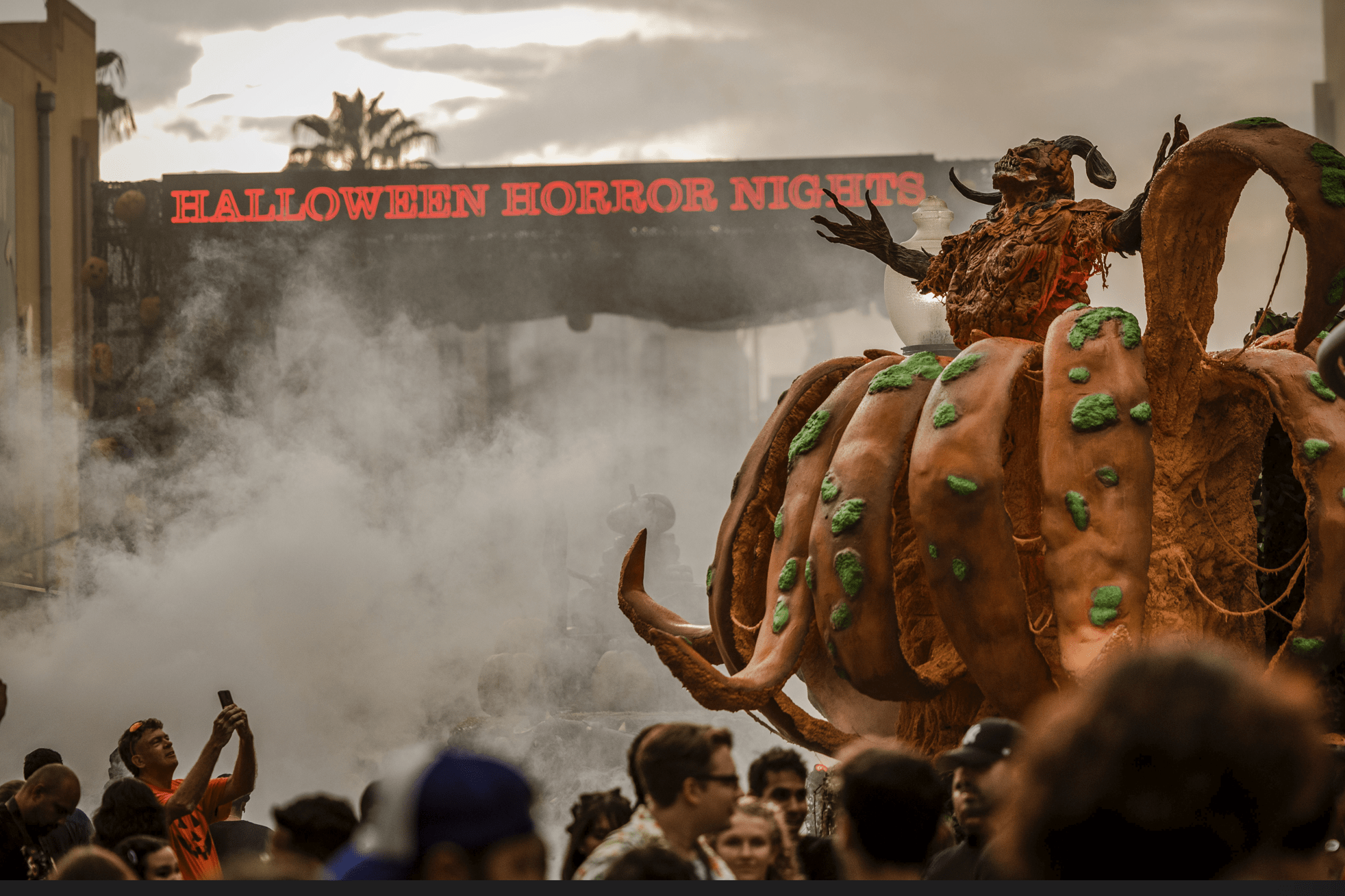 With the return of spooky season has come the return of Halloween Horror Nights (HHN), where Universal Studios Orlando transforms into a world of terror.

This year was my second time attending the fright-filled event and this time I felt more prepared to experience and appreciate all of the scares. Stepping through the gates, the park had transformed into a world of frights. After passing by our host, the Pumpkin Lord, it was time to head to the first house of the night: Spirits of the Coven.

When I get jump scared, I react anywhere from shouting “Hello!” like a deranged customer service representative to screaming bloody murder. Charging forward, I had no idea what my response would be to the haunted flappers and bloody bartenders. Obviously, I reacted rationally and screamed “Hello!” in a strangled falsetto while shutting my eyes and flinching. First house down, but I felt warmed up to try more.

After surviving the witch-hunt, I decided to try my luck with the post-apocalyptic Descendants of Destruction. The house was set in a New York City subway. Traveling through in horror, increasingly strange mutants lunged out. Fortunately, I managed to keep my eyes open this time to see the strange glowing mushrooms and decrepit subway structures.

Next was by far my favorite attraction of the night: the Halloween Nightmare Fuel Wildfire show, which slayed in more ways than one. Between the incredible dancing, mind-blowing stunts, and fiery surprises I was left stunned. The production value and the talent were both incredible. I was tempted to watch it again at one of the later showings, but there was more to see elsewhere in the park.

Still in an upbeat mood from the show, I made my way to my most anticipated house of the night––The Weeknd: After Hours Nightmare. As a fan of The Weeknd, I figured nothing could make a haunted house better than being able to sing along to music while I walked. The energy was electrifying, and between the neon lights and pulsing beats I thought that this house would be an easy one.

Boy, was I wrong. Behind all the flashy décor were smart scares and a story of The Weeknd becoming a music-industry monster. I have to admit that I made a frightened leap into the air more than once.

Our last house of the night, Fiesta de Chupacabras, sadly left a bit more to be desired. From the start, the branding seemed to be toying the line between storytelling and cultural insensitivity. As the audio track and marketing materials both used the occasional Spanish phrase to wish me and my amigos luck or tell me to listen to my abuela’s warnings, I got the impression that the house could have benefited from a more diverse production room. The effects were still engaging and I did jump once, but I found myself distracted by everything else going on around me.

For our final journey, I explored some of the scare zones throughout the park. I managed to make friends with a couple of crows, but was sadly ignored by the evil corn demon, who I considered to be the most iconic figure of the night. I also got surrounded by screaming trick-or-treaters, which would have seemed scary enough if the children weren’t also bloodthirsty killers.

I loved everything we did at Halloween Horror Nights, but the Halloween Nightmare Fuel Wildfire performance stood out as a must-do. While Fiesta de Chupacabras may have been a bit questionable, the house could be salvaged with some easy revisions to the audio script and marketing materials for next year. Overall, I loved attending the event and can’t wait to attend again next year.

Disclaimer: Tickets to this event were provided to us free of charge by Universal Orlando Resort as part of a media event. The opinions on this page wholly reflect the opinions of the writer.