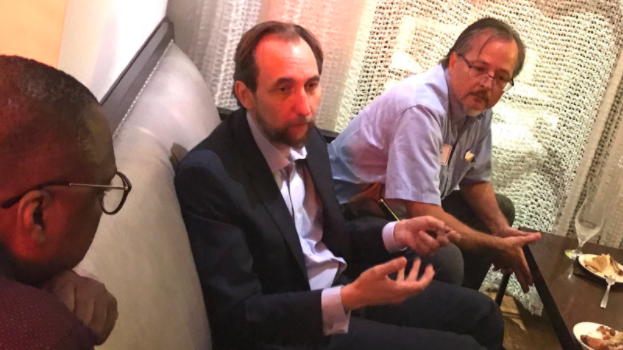 Opinion: It Is Not Antisemitic to Learn ‘Global Citizenship’ from the Experience of Refugees Trapped in War

I write in reply to a deeply misguided article, “Instances of On-Campus Antisemitism Spark Dialogue,” published by The Sandspur on October 16, 2020. The Sandspur quoted Rollins College student Karen Gutensohn who alleged antisemitic behavior in my INT 200 course of Fall 2019. Gutensohn told The Sandspur of other antisemitism on campus to which I can not respond to. Nonetheless, as the only person accused in the article, it damaged me without justification.

The Sandspur contacted me four days earlier for an interview about Gutensohn’s accusations. I responded by asking of broader concerns on campus (described in her article), including other students who spoke with Dr. Yudit Greenberg and Hillel associate Emily Block. The prior week, I was informed of these concerns by Holt School Dean Rob Sanders and Dr. Mike Gunter. But at the time, they did not share any specifics with regard to the course or student in question, referring instead to a capstone seminar for Majors.

Professors teach 100 or more students each year, so I explained I could not respond to accusations unless I knew the student and course. I could see Dean Sanders and Dr. Gunter were concerned because, before I had a chance to respond to any specific accusation, they suggested I consider inviting Jewish guest speakers in future classes and devote more sensitive attention to Jewish students. I had no idea about the accusations because I am not antisemitic, and I oppose antisemitism. Sanders and Gunter understood my awkward position, expressing desire to resolve the situation.

When I was informed of the student’s name and course title, the accusation of antisemitism did not register. I explained that I needed time to review my class record. Afterward, I realized the source of complaint involved criticism of the state of Israel and its policies, which some define as a “new form of antisemitism.”

Early in the semester Gutensohn chose to present on Palestinian refugees. Afterward, she wanted to write on the same subject, using a paper from a Judaism course with Dr. Greenberg as the starting point. She attached the paper with her message. Both it and the other course did not concern Palestinian refugees. I could tell Gutensohn did not understand the Palestinian plight, so I suggested she read the most important scholarly works on the subject.

I am in my fourteenth year teaching at Rollins College, and I taught at universities in Florida, New York, and Indiana over the past two decades. My Ph.D. in Middle East politics comes from Georgetown University. It saddens me to respond to these accusations of antisemitism. More than a decade ago, two Rollins staff members accused me of bias against Israel,  demanding I change course text books for my course, “The Politics of Israel-Palestine.” They wanted me to submit to a team of observers who would judge my qualifications to teach. I objected to the intrusion and continued teaching as a matter of academic freedom. This is the problem with advocacy around “New Antisemitism” because it fosters censorship around contested politics in the Middle East.

The wider context in Florida and America

Like all states, Israel faces criticism, especially due to its continued denial of Palestinian refugee rights. Across the US, we acknowledge states are fair targets of political criticism. No state is sacred, including Israel. When state power is tied to religion it undermines religion’s sacred quality. Standing in the rotunda of Jefferson’s Memorial in Washington, DC, and reading his words etched in stone, one appreciates why life in America is based on the separation of politics and religion.

In 2018, I designed INT 200, “Human Migration and Global Citizenship,” as one of Holt School’s new Community Engagement courses. Gutensohn enrolled the first time it was taught. I chose the topic as a pillar of Rollins College education: global citizenship. Students are expected to consider the meaning of global citizenship by examining the plight of refugees.

Once Trump entered the White House in January 2017, he placed a travel ban on Muslims, blocking airport entry of some Green Card holders for unconstitutional religious reasons. Next, he built the Trump Wall on the border with Mexico. In the INT 200 course, we discussed the architect of Trump’s policies, White House advisor Stephen Miller, who like Trump’s daughter Ivanka and son-in-law Jared Kushner, is a strong Jewish supporter of Israel and admirer of Prime Minister Benjamin Netanyahu. When Miller championed xenophobia at the White House, his own family came forward to criticize him for betraying his grandparents who immigrated from Russian lands at the time of Jewish pogroms.

The irony of accusations against me is that uncritical supporters of Israel are the ones stoking xenophobia in America. It is important to know INT 200 does not require students to address Palestinian refugees. Gutensohn made it her personal focus, and I encouraged her to go beyond Dr. Greenberg’s instruction about Judaism in order to examine the Palestinian side of the story. What she recalls of her classroom experience is undoubtedly the result of my insistence that she research origins of the Palestinian refugee problem. Her accusation I punished her with low grades is entirely unfounded. She rejected my advice on sources that reveal key facts. No one else in the course reported unfair treatment.

The Sandspur quoted Emily Block of Hillel who spoke of ensuring “proper procedures and policies are in place so all students are able to engage in positive and equitable learning experiences.” But learning a subject like Palestinian refugees is not served by prioritizing “equitable” experiences of students who obstinately reject basic truths. By such standards, education is unlikely to result in “positive” personal growth. Liberal Arts students benefit from open interdisciplinary studies that challenge them to think in new ways.

A majority of Jewish Americans oppose Trump, DeSantis, and other politicians who express uncritical support of Israel. Leading opinion-makers like Peter Beinart, author of The Crisis of Zionism (2012), are deeply concerned about Israel’s direction since its war with the Palestinian Authority in 2000-2003, and its building of a wall across Jerusalem and the West Bank that restricts movement of Palestinians.

There is close affinity between Israeli leaders, who dangerously mix religion and politics, and right-wing populists in the West like Trump who rose to power over the past decade. Beinart and others worry due to Zionism’s deeply conflicted history, as told in works by prize-winning Israeli authors like Meron Benvenisti in Sacred Landscapes (2002), concerning ethnic cleansing of Palestinians, and Tom Segev in The Seventh Million (1991), explaining the eye-opening politics of Israel on the Holocaust.

I know Gutensohn shares the concerns of Beinart and other liberal Jewish Americans who fear right-wing populism. I share the same concerns. To suggest my behavior in the INT 200 course was anti-Semitic is absurd. The course is an anecdote against xenophobia and bigotry, yet it requires looking honestly at the global refugee crisis, including the century-old Palestinian experience. My four decades working on Israel-Palestine is an effort to bridge divides that lead to violence.

The merits of Liberal Arts education

As global citizens, we must understand the plight of refugees by looking beyond narrow state interests, whether defined by American or Israeli politicians. Early in the Fall 2019 semester, my students and I attended the Winter Park Institute lecture by Ambassador Zeid Ra`ad al-Hussein, former UN High Commissioner of Human Rights who resigned in 2018 because Western leaders failed to help refugees. Dr. Gunter arranged a smaller event for Majors in International Affairs majors who wanted to meet the great grandson of Sharif Hussein of Mecca.

Back in World War I, Britain famously allied with Sharif Hussein’s tribal forces to defeat the Ottomans. Afterward, Britain betrayed Arabs of Palestine by assisting European Jewish leaders who built separate Zionist governing institutions in the 1920s and 1930s. This set the stage for the Palestinian refugee problem of 1948. I asked Ambassador alHussein about today’s Western, Zionist, and Muslim leaders who exploit religious divisions in the Middle East. He responded bitterly, saying in paraphrase, “they all know what they are doing; it is a game; they use religion to advance their interests, and innocent civilians suffer.”

I am grateful to teach at Rollins College where Liberal Arts faculty and students explore critical issues with open minds. I do not perceive danger from studying the plight of refugees. Students should not fear learning from refugee experiences. Following Israel’s creation in 1948, its leaders created suspicion around the entire Palestinian Arab experience, denying responsibility for a major refugee problem while pretending Palestinians never existed. This was true between the 1950s and 1980s when generations of Palestinians lived in camps without citizenship.

Most Americans have been misled because supporters of Israel created political taboo around the subject of Palestinians. Since the 1980s, Israel’s responsibility for the Palestinian refugee problem has been documented in top scholarly sources, including Israeli ones. Thus, it is past time for US faculty and students to acknowledge historical facts as the required first step to resolving the problem.