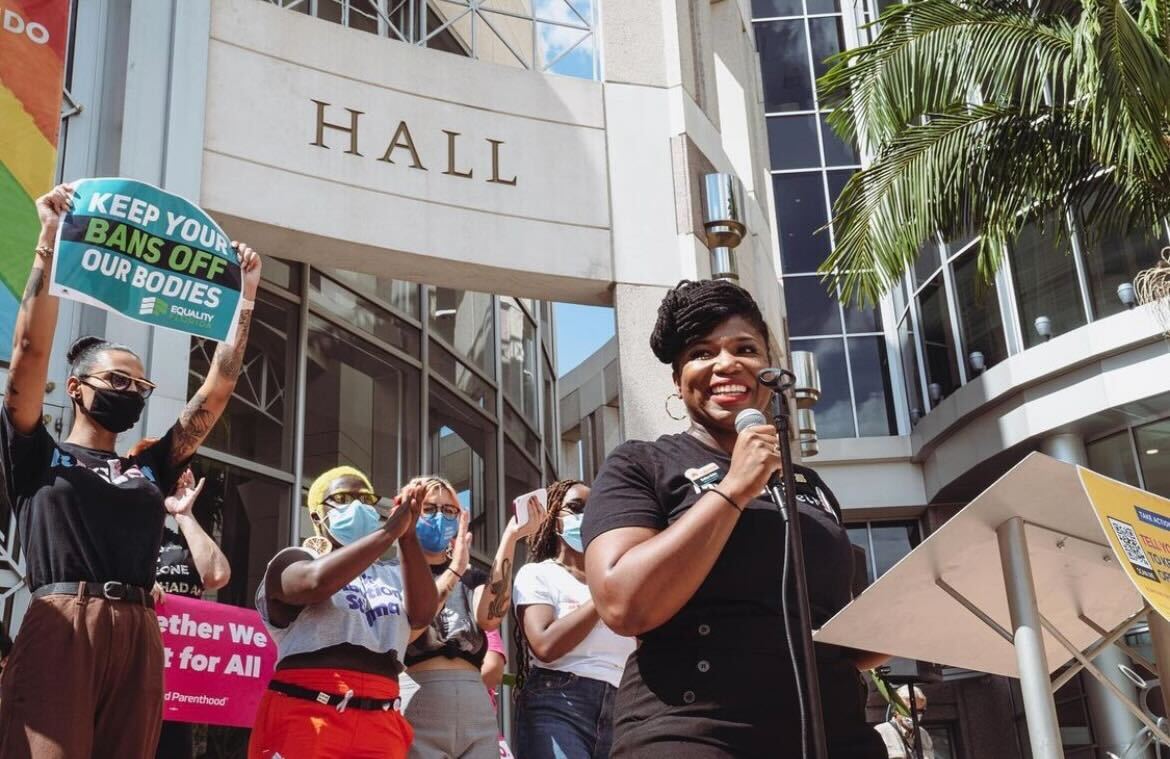 The March for Abortion Access was a day of unity and protest throughout Central Florida and the entire US. I attended the protest on Oct. 2 with some of my friends, demonstrating support of abortion access for all.

The protest came in reaction to recent legislation in Texas that effectively banned all abortions for pregnant people six weeks after conception. While the original bill — one of the most restrictive bills for abortion access in the entire country — was passed in May, it had not yet gone into effect, as it was being challenged in the courts.

As USA Today reported, however, at the beginning of September, the Supreme Court ruled the law as constitutional in a 5-4 vote. The law has since gone into effect, restricting abortion access for millions.

Republicans in conservative-led states, Florida included, have begun to use this precedent to impose their own extreme abortion regulations. As a result, protests have broken out in many states to show support for abortion access and demand that legislators protect individuals’ right to safe abortions.

The March for Abortion Access in Orlando was organized by the office of Rep. Anna V. Eskamani, the congressional representative for Florida State House of Representatives 47th District.

The demonstration was a direct response to the then-upcoming Oct. 4 Supreme Court hearing regarding the constitutionality of a 15-week abortion ban in Mississippi. Since then, the Supreme Court has heard the case, but a verdict has yet to be reached.

According to the event’s website, “this, along with the six weeks abortion ban in Texas and our own fights in Florida, compel us as Central Floridians to come together and mobilize to protect abortion access for all.”

The march featured Eskamani and seven guest speakers. Speeches were followed by a march at 12 p.m. from Orlando Town Hall to the Federal Court Building.

While the turnout was expected to be successful, the number of people who showed up in support was astounding. The protest exceeded 1,000 members and was large enough to shut down N Orange Ave. Eskamani and the fellow organizers appeared ecstatic, and they happily reported the successful numbers to the cheering crowd.

Aside from the importance of abortion access as a right that must be protected, the march was also essential in how it represented intersectional advocacy. Many trans and nonbinary people shared their insights as guest speakers; they discussed how abortion rights are not just a woman’s issue, but a human rights issue that impacts all people of varying gender identities who can get pregnant.

Discussed in a political arena, I found this discussion to be one that was extremely relevant and exciting to hear. As a queer person with a nonbinary-identifying sibling who could get pregnant, the issue of inclusivity is one that hits close to home.

Seeing Eskamani’s event directly uplifting speakers of various gender and sexual identities was something I was not expecting to get to experience. I am, however, very glad that the candid discussions about these complex issues occurred.

After the march, it was great to see many people supporting small business such as Craft and Common, a queer-friendly, woman-owned coffee shop in downtown Orlando. To me, the beauty of public demonstrations is the way that they bring the community together.

This union is amplified by supporting small businesses, socializing with neighbors, and generally not keeping ourselves cooped up inside.

Overall, the March for Abortion Access appears to have been a huge success. It is my hope that the Rollins community continues to increase its participation in local demonstrations for social justice. Whether this is through engagement with campus social groups—such as the Black Student Union and Voices—or through political actions like registering to vote, the Rollins community can become a champion of progress and equality.