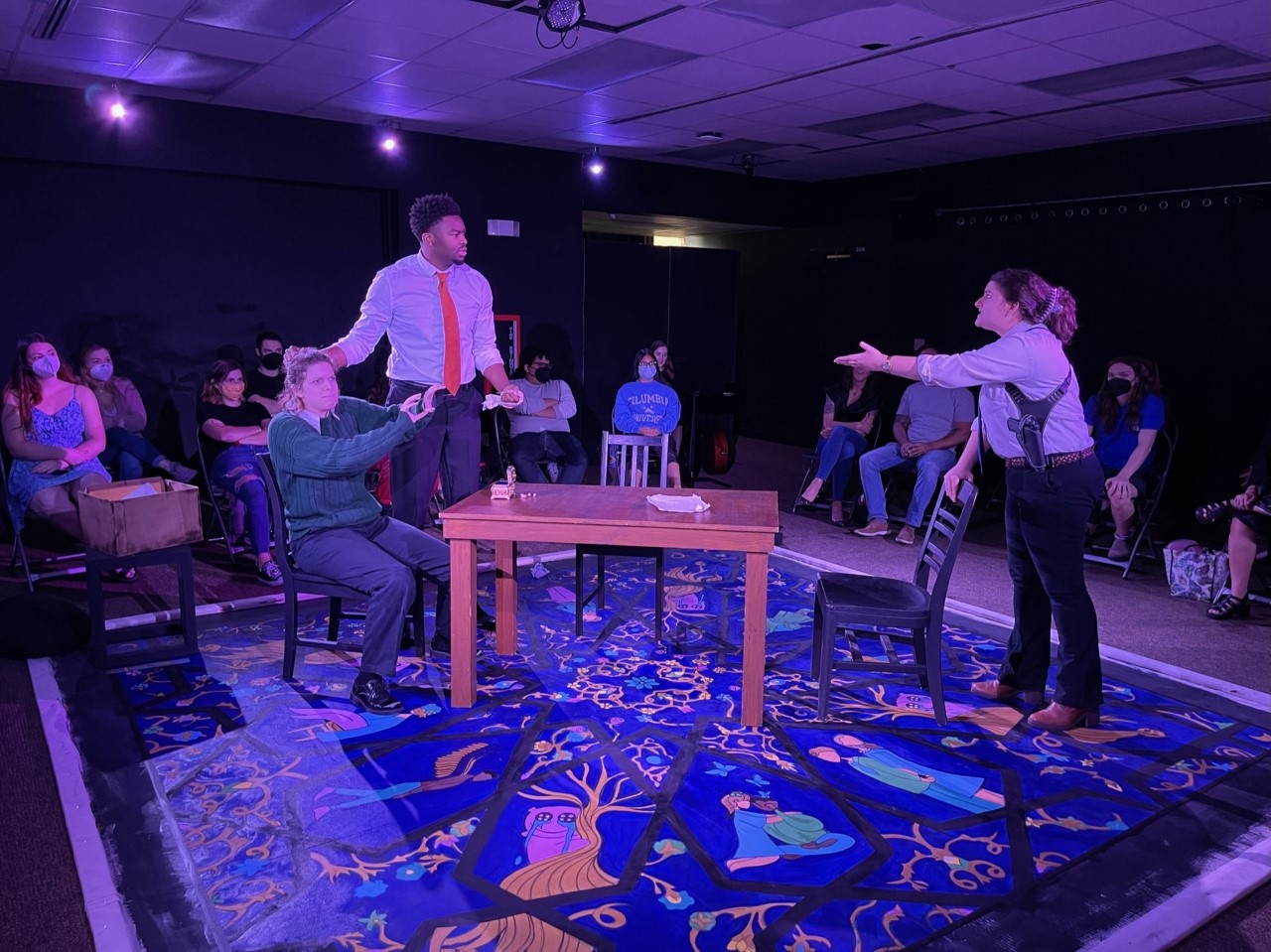 Comedy and calamity are fused in Martin McDonagh’s “The Pillowman,” a vivid, intriguing play brilliantly put on by the Rollins Players Second Stage from April 6 to April 9. The play was directed by Ghina Fawaz (‘22) with musical direction by Laura Powalisz (‘24).

Rarely does one chance upon a drama quite as tragic as this one; some disturbing themes include severed toes, interrogational torture, assisted suicide, and capital punishment. But these sordid themes are countered with farcical exchanges and sparkling banter, a combination that left the audience of the Lyman Blackbox chortling with wide eyes and unhinged jaws.

“The Pillowman” is predicated on the power of storytelling. It focuses on an imaginative writer named Katurian Katurian (Kay Brazzell ‘25), who is interrogated by two police officers in connection with a series of child murders in a totalitarian state. Katurian has written hundreds of gruesome tales surrounding child deaths, such as The Pillowman, a story about a man made of pillows whose sole purpose is to guide children with troubled futures to their suicides.

“With a difficult show like this, one thing that has been very strong is the joy that we share together and the passion that each person brings into the room,” said Fawaz.

Second Stage productions from the Rollins Players are entirely student-led. Fawaz directed “The Pillowman” as her capstone project for a directing emphasis. A double major in Psychology and Theatre Arts, with her honors thesis focusing on suicide prevention through theatre, Fawaz’s passions merged while working on this play.

McDonagh, a British-Irish playwright, is known for his ability to infuse humor into some of the most disturbing and violent subjects. This particular play has influences ranging from the Brothers Grimm fairy tales t0 Dostoevsky’s “Crime and Punishment.”

McDonagh’s character Katurian is being questioned by the police for most of the play, reading his stories aloud at points to fill in holes of the plot. McDonagh did not write Katurian to demonstrate the value of artistic merit, but rather to illuminate the human instinct and ability to compose stories that are inventive, disturbing, and have the potential to outlive their creator.

Fawaz and “The Pillowman” team created a theatre-in-the-round in the Lyman Blackbox, fashioning a jail-like atmosphere with audience members watching on all four sides. Four musicians in each corner of the room—including drums, cello, guitar, keyboard, and ukulele—played compelling music composed by Laura Powalisz (‘24) which impeccably matched each mood. Fawaz designed the floor of the cell, a neon glow-in-the-dark mural made to look like stained glass and adorned with token characters from Katurian’s stories.

Katurian has an endearing parental relationship with her brother Michal (Ty Matthews ‘25), whose trauma from being abused by their parents leads him to enact Katurian’s most brutal storyline by murdering two children. Michal’s childlike candor is evocative of Lennie from John Steinbeck’s “Of Mice and Men,” albeit Michal’s murders are intentional, not accidental.

Meanwhile, Officer Tupolski (Marina Russell ‘22) and Officer Ariel (Leon Shields ‘24) toy with the good cop/bad cop trope, fiddling with Katurian’s mind whilst trying not to lose their own. The officers provide the bulk of comedic relief and light entertainment throughout the play, though not without sprinkles of impactful social commentary. Russell’s Tupolski roused laughter from the audience by resentfully stating, “I’m just tired of everybody ‘round here using their shitty childhoods to justify their own shitty behavior. My dad was a violent alcoholic. Am I a violent alcoholic? Yes I am, but that was my personal choice.”

The toy was accompanied by a slip of paper with the statement, “The Pillowman Team recognizes the themes presented in the show may be uncomfortable for some. That said, please hold on to your new green friend and feel free to check out some support resources* available on the back of this card.”

The intricate set and artful lighting design transformed the space, with flashes of red timed perfectly with Katurian’s screams. Lighting was designed by Ryan Rawoof (‘23), who said, “This is obviously a very twisted play. There is a set of reality and a set of fantasy: The set of fantasy is when I tend to get wackier with the lighting, with a lot of pink for the scenes of murder, and blue and red for the scenes of the pillowman.”

Fawaz said, “As a Muslim-American woman, it has been a really empowering experience to be leading this show, by representing voices that have not been shown that much.” She added, “The show talks a lot about child abuse. All four of these characters are adults, but they struggle with severe trauma based on how they were treated as children. It sends a message about how we should be treating children: we are complicit in how the next generation is raised. It all starts from you, the audience member.”

This production was in honor of Estefania Sanchez-Mendez (‘23), who was a cherished part of the “Pillowman team” before she passed away in March 2022.