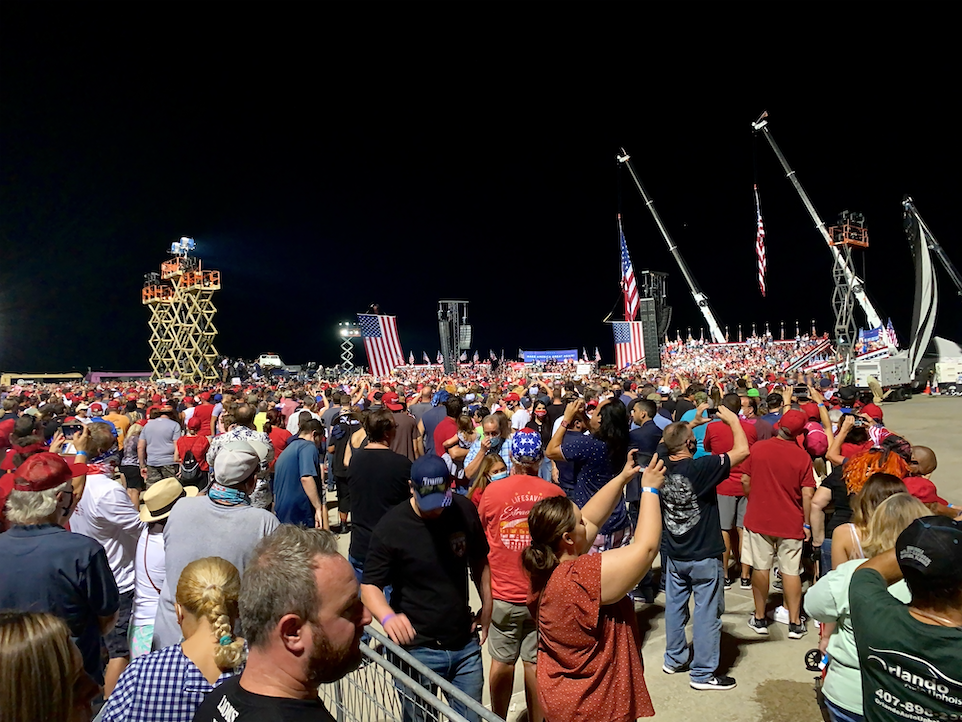 Sometimes being surrounded by people with jarring, opposing beliefs is an out-of-body experience. For example, I attended a President Trump rally in Sanford as a leftist. I felt as though I was surrounded by polarizing opinions, trying not to get infected either by false beliefs or COVID-19, which many supporters probably carried.

I was not sure what to expect until I saw the long road lined with people, holding poorly informed signs, ready to topple at any moment. I tried to not stick out like a sore thumb, but my mask definitely gave my leftist tendencies away. As I made my way down the road ready for disappointment from the president, I counted ten people, out of hundreds, with masks on, albeit below their noses.

I began to realize why the media labels these rallies as super-spreader events, and I started to doubt if attending was even worth it. The leader of our country, who’s supposed to be our representative, holds countless super-spreader events just like the one I attended and doesn’t see an issue with being the major representative of the virus. Since I live on campus, I made sure to get tested both before and after the event before I came in contact with anyone. I can’t say the same about the others.

If the most powerful man in our country can’t distinguish right from wrong and instead leads as a bad example, what’s to stop others from spreading the virus? I laughed, thinking about the possibility of fellow students unable to go home for a family holiday while the President of the United States holds campaign events and crams his followers into limited spaces, against the CDC’s prevention guidelines.

I didn’t think seeing Trump up close was worth the risk of dying, so I remained on the edge of the crowd, blending in with the sea of red. This allowed me to interview some of the sheep in the herd about why they support the man who was putting their lives at risk at that very moment.

The first two teens interviewed said they appreciated Trump’s agenda and that Biden is a socialist. As someone who appreciates socialism, I had to fight my urge to laugh out loud at their willingness to believe that Biden, the most moderate Democratic candidate in the primaries, supports socialism. They ended their interviews by saying, “Trump’s been in office for four years, and I think it’s been the best four years of my life.”

These white males just admitted that during the reign of a racist, sexist, and homophobic white supremacist, their lives have been great.

After noticing that the majority of parents brought their children along to indoctrinate them, I held one final interview with a woman whose hatred for China runs deep. She gave a piece of advice: “one thing you girls got to remember: buy American, hire American.” She was following President Trump’s hate speech towards the growing Chinese economy, wanting America to remain in an economic first place.

She asked why I support Trump. I stumbled for an answer I believed she would quickly welcome and replied that Biden is all performative activism when it comes to women’s rights. She accepted my answer, telling me she was proud that I had done my research, but if she had done her research she would have known that Trump has appointed fewer women than Obama and Clinton.

This woman blindly accepted what I told her without checking the data to corroborate my claim. Her fear of China was more important to her than human rights.

On the way out of this alternate dimension, I stopped a man and tried to interview him, but he interrupted me and said, “you aren’t in the Trump supporter demographic.” Those seven words sum up the troopers of Trump; they realize women and people of color aren’t drawn to Trump. They realize they’re racist, sexist, and homophobic. They just don’t care.