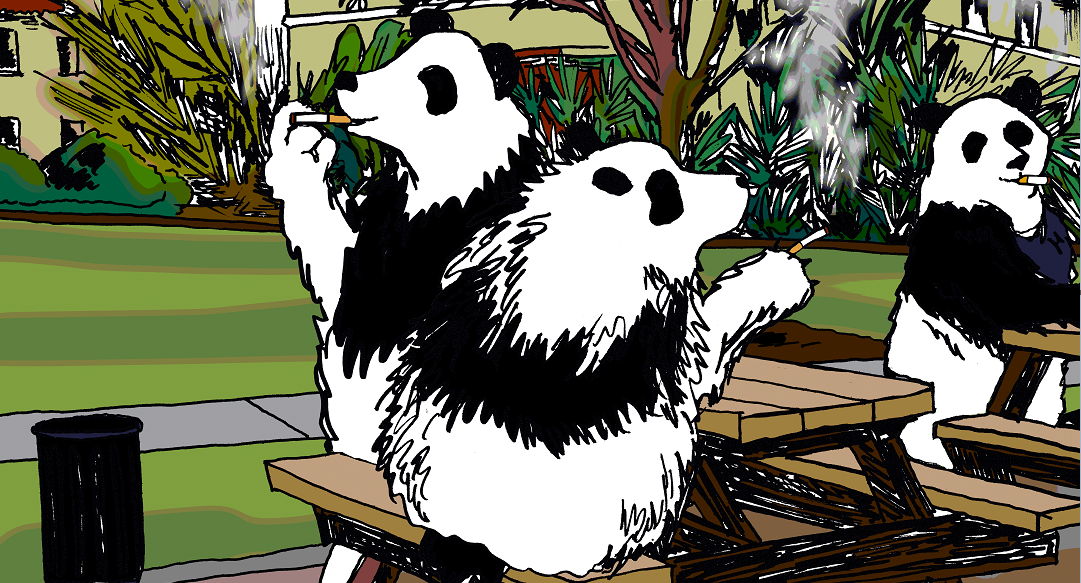 Editor’s Note: Here at The Sandspur, we don’t hate smokers. I promise. But if you read last issue’s “Please don’t feed the animals,” I can understand why you might think otherwise. Reader response has indicated a cloud of confusion – particularly concerning tone and intent – surrounding writer Ryan Lambert’s satirical approach to smokers and their role on campus.

That said, I’d like to extend an apology to our readers for any misunderstandings, as well as to clarify that it was merely meant to poke fun at the new smoking policy (and all that it suggests). Admittedly, the more innocuous course of action here would have been to simply label the piece of satire as such, but where’s the fun in that?

I love animals. For the most part, they’re all adorable, furry little things that are without a doubt less intelligent than I am (notice I said for the most part – damn dolphins). I must say, it feels pretty great to be smarter than 99.99% of life. Plus, they make for some fantastic YouTube videos.

I can’t tell you how many countless hours I have spent watching pandas sneeze or kittens waking up from pleasant naps. Furry or scaly, horned or tailed, landlubber or ocean dweller, animals make for some fine entertainment. I mean, have you seen Planet Earth? And don’t get me started on Blue Planet. Epic to the Nth degree.

There is a dark side to the animal kingdom, however. I mean, anyone who’s ever watched the Discovery Channel knows that it is always the baby who’s first to be ravenously and mercilessly devoured. Mates are cuckolded, babies are cannibalized, and the runt is always the first to be neglected by his or her mother. It was Alfred Lord Tennyson who said that “Nature is red in tooth and claw.” If that dude was at Hogwarts he would have earned, like, 20 house points for that hot tamale of a zinger. But I’m getting off topic.

Like me, Rollins recently has exhibited its own form of animal appreciation through the creation of the five smoking zones on campus. Now, before you get upset, I’m not calling smokers animals. I’m just calling them subhuman creatures that exhibit a behavior so stolid and detrimental to their health it is as if they were animals and therefore they ought to be ostracized from us regular folk. See? Not that bad. Now, smokers are required to be in one of these five zones before lighting up and obtaining their nicotine induced high. The zones are suitably small and isolated from any footpath or building, thereby guaranteeing that none of us regular folk endure a single smoky second. Plus, it gives our campus a jolly zoo-like quality. “Look mommy, a smoker!” “Don’t look at it honey; it’ll be going extinct soon anyway.”

I am only flummoxed by one thing: why did it take this long? I mean, smokers used to be roaming our streets, stinking up areas that were 30 feet away from buildings. Sure, I used to just simply hold my breath whenever one of these creatures passed me, but the time for tolerating minor inconveniences is over! I say that these zones – if anything – are too generous. We ought to give them just one concrete slab and one bench and then let them all fight it out Darwin-style. As they say, we have to let nature run its course. Regardless, I’d buy tickets to watch that; maybe Animal Planet will want to go in halfsies with us – the tagline “Survival of the Unfittest” already has such an awesome ironic ring to it. You get it? Because of their damaged lungs?

Some of my readers may be all agog because of my seemingly harsh parlance, but to that I have this to say: “If smokers really were human beings, don’t you think they’d be treated like one?” Give me 20 points, Headmaster.