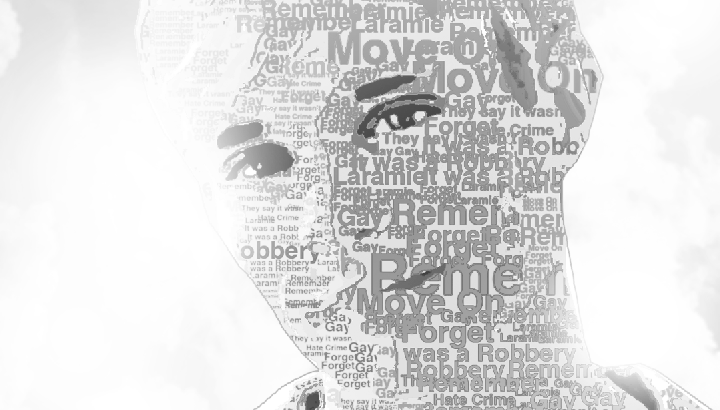 From September 27th until October 5th the Rollins theater department is performing this piece. The play is directed by Thomas Ouellette and will be shown in the Annie Russell Theatre at various times during its seven day performance schedule.

The prequel to the Laramie Project: Ten Years Later is a play that was created from the actual events of a tragedy that occurred in Laramie, Wyoming in 1998 where a young man named Matthew Shepard was tortured and murdered, and it was largely reported that this happened because of homophobia.

I wanted to see where homophobia is now, not where it was in 1998. The second play is about how Laramie has owned what happened. The inhabitants of Laramie have rewritten their history. What is interesting is to see how people attach to the play.
-Thomas Ouellette
Director

Several weeks after the death occurred, the Tectonic Theater Project traveled to Laramie where for over a year they gathered over 200 interviews from people living in Laramie in the aftermath of the tragic event. The play takes aspects from these interviews and published news reports and compiles them into this moving production.

Ten years after the untimely death of Matthew Shepard the Tectonic Theater Project wanted to follow up on Laramie to see how far it had come since the spotlight was cast on it a decade ago. The Laramie Project: Ten Years Later was created in a similar way as the original. Many Laramie inhabitants were interviewed and gave their perspective on life after the tragedy. Thomas Ouellette, the director from Rollins who is putting on the performance, said, “The Tectonic was not going to go back to find unpleasant memories, but to check with the town itself and the progress or permanence that had occurred.” The overall purpose of this play is to show how far a group of people is willing to move forward after a hardship such as the death of Matthew Shepard occurs.

One of the big ideas I think of is to connect with these people on a visceral level… We should portray these characters as what they are, human beings. And as such, they are someone you can connect with, with compassion.
-Peter Ruiz ‘15

The Laramie Project: Ten Years Later opens on Friday September 27th at 8:00 PM and is open for anyone who is willing to see it. Tickets for the production can be ordered now and will be on sale at the box office on days of the performances. Rollins students and faculty can receive tickets for free and additional tickets can be bought for the discounted price of $10 with the presentation of an R-card. For non-Rollins faculty and students tickets are $20, or $10 if a different student ID is presented.