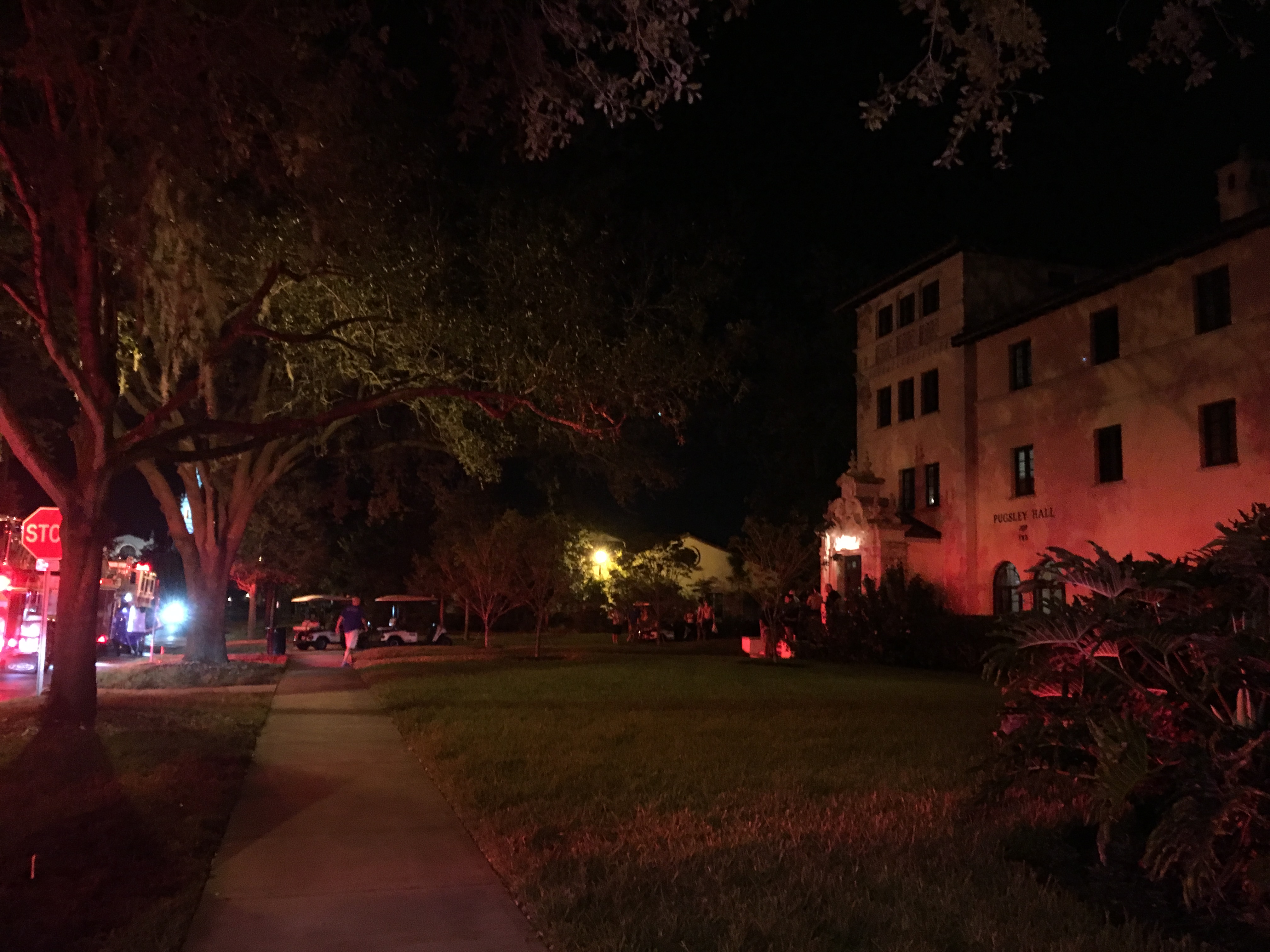 The fire sprinkler in a Pugsley Hall room of two students, Rafael De Osma ‘20 and Joaquin Angulo ‘19, broke on Friday, September 22, around 11 p.m., flooding the students’ room and the floors beneath them. Three fire trucks, a fire rescue vehicle, and Campus Safety personnel immediately reported to the scene and evacuated all residents to control the flooding and potential damage. Pugsley Hall is the current house for Rollins fraternity chapter Tau Kappa Epsilon. De Osma and Angulo are roommates and members of the fraternity.

Around 11 p.m. Friday, De Osma was returning to his room, with friend Felipe Pachon ’19, when he opened his door and water began pouring from the ceiling.

“I literally opened the door to my room and the [sprinkler head] went off,” said De Osma.

Angulo was asleep in the room when De Osma arrived, so he was pretty confused as to how it happened. However, Angulo believes the door hit the sprinkler as well, due to its positioning on the ceiling near the door.

Campus Safety officials and emergency responders told the students they believe the sprinkler was set off by a shirt hanging on the sprinkler head. Responders found a broken hanger and a shirt on the floor beneath it. Ken Miller, Assistant Vice President of Public Safety, stated, “At this point, we have no information leading us to believe it was a system or hardware malfunction. All life safety systems worked as intended.”

However, both boys claimed this was not possible. “The sprinkler was already detached one inch from the ceiling, so I am positive the door must have hit it when I opened it,” said De Osma.

“They claim the shirt they found was mine, but I was outside the room. Hence, it was impossible for me to leave the room without activating the sprinkler, and my roommate was asleep.” Angulo confirmed this, stating, “We’ve noticed before that [the sprinkler head] was already a little bit down.”

Both students claim there was no smoke present or any other reason for the sprinkler to be set off on its own.

As of Monday, September 25, the sprinkler remained unrepaired. De Osma presented a photo of the hole still visible in the ceiling and the base of the system noticeably separated, making the flooding incident prone to happen again. The current state of the sprinkler could be seen as a fire hazard if it were to not properly function during a real fire, especially since there are many other students currently living in Pugsley.

Nicholas Khazzam ’18, President of Rollins Tau Kappa Epsilon chapter, confirmed the sprinkler was somehow pulled out of the wall, causing the flooding.

“It was just like a waterfall. The first and second floors were flooded,” said Khazzam.

Khazzam claims there was minimal damage to Pugsley Hall. The only room on the first floor is the fraternity’s chapter room, which did have some flooding; therefore, the carpeting was taken out and thrown away. Khazzam went on to clarify, “Everything is dry now, except for the AC unit in that room. No policies were broken; it was just a malfunction.” Regarding property damage, Campus Safety said, “We have not put a specific value to the personal and college-owned property that was damaged. A more detailed assessment will be completed this week.”

Leon Hayner, Senior Director of Residential Life and Explorations, confirmed damages are still being assessed, but said, “Yes, there was water damage to personal belongings and to the building.”The damage included multiple pieces of De Osma and Angulo’s property.

“It’s really bad, all my stuff is soaked,” explained De Osma. “My roommate and I were soaking wet, standing outside Pugsley looking at all of our ruined things, including my passport and F-1 Visa.” De Osma is an international student from Peru, while Angola is from Mexico. Their room is set up into two separate spaces; therefore, De Osma’s property received the most water damage.

Unfortunately, De Osma reported Campus Safety did not believe his account of what happened and was not entirely supportive during the process. “They were not compassionate at all,” he stated.

“All they were saying was that it was our fault and that we might be liable for thousands of dollars in damage. Aside from this, they gave us two empty rooms in Pugsley, but told us that if our room is not ready in one week, they would start charging us single-room fees.”

In regards to reparations and consequences, Hayner said, “We will review and will follow our code of conduct and guide to residence hall living expectations. In general, students who cause damage to college property or property of others, even if by accident, are required to pay restitution and could face additional sanctions.”

Aside from immediate frustrations with faculty, De Osma and Angulo applaud Rollins’ maintenance crew for placing ventilation systems and dehumidifiers throughout the room. “It looks like we will be ready to move back into the room soon,” he explained.