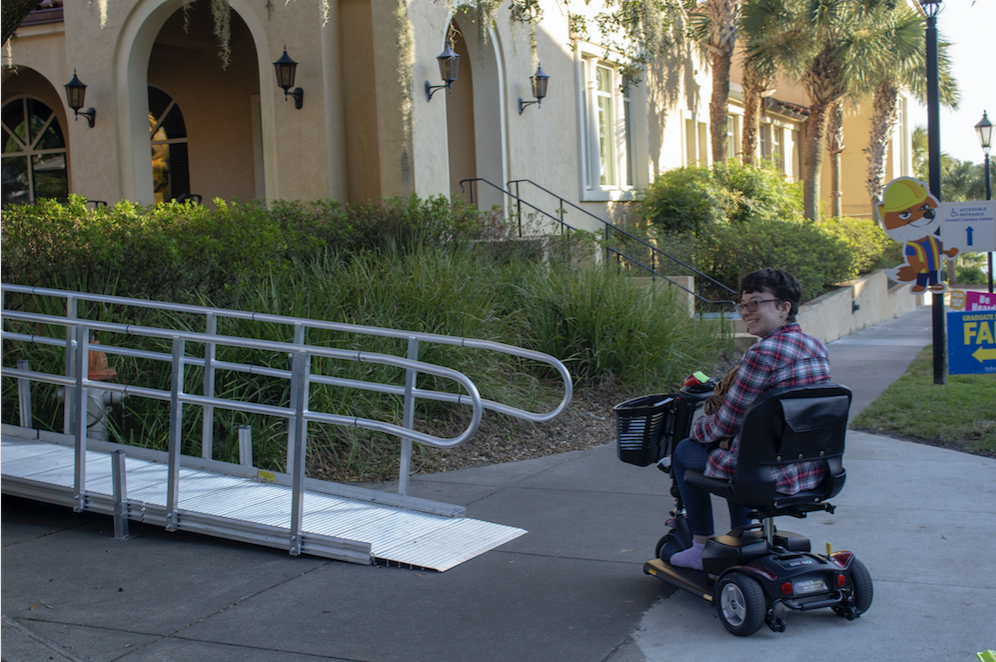 By Heather Borochaner on November 7, 2018

After months of student outcry and complaints to Accessibility Services, a temporary ramp was added at the front entrance of the Cornell Campus Center, finally offering students with accessibility needs a safer way into the building.

Accessibility-dependent students and their allies started raising concerns in August about the building’s inaccessibility. The only accessible route into the Campus Center prior to this new ramp was down a steep sidewalk to the back entrance of Dave’s Boathouse and then up an elevator to the main dining hall.

Not only was this an inconvenience, but it was a safety hazard. In an emergency situation, students in wheelchairs would not have been able to escape efficiently because of the steep sidewalk and elevator-dependence.

As covered by The Sandspur in mid-September, freshman Renée Rivera (‘22), who uses a wheelchair, faced so many issues getting to the Campus Center’s accessible entrance that she avoided the building altogether. Rivera felt that this restricted her ability to socialize with other students. She also mentioned safety concerns as she struggled to control her wheelchair while traveling down the steep sidewalk.

Now, that there is a ramp in place, Rivera said that she appreciates Rollins taking actio but added, “I wish this had been done before the school year even started, so we wouldn’t have had to fight just to be able to access one of the main buildings on campus over two months later. I really feel that the college could’ve been more proactive to prevent students with disabilities from having to experience frustration, isolation, a loss of time, and physical strain.”

Shey Bogumil (‘19), another student who voiced her concerns to Accessibility Services, agreed. “That ramp should have been there from the beginning,” she said. “If you take away a ramp, you need to add a new ramp. Rollins has not put accessibility at the forefront of their priorities, which is legally and morally incorrect,” she said.

Bogumil said that while the construction has created a lot of problems for accessibility, it has highlighted many of the ongoing concerns on Rollins campus. “This is a very small step forward. There is still a long way to go,” she said.

Whitney Horton, director of Accessibility Services, said that she is “grateful that those who are in decision-making positions in regards to construction listened to the student feedback and addressed this concern.”

Horton also said that the credit for the change should go to the students who spoke up. “It is always amazing to see students who identify an issue, advocate for positive change, and make that change happen!” she said.

The project was approved in late September, and some time was taken on logistics to make sure the ramp would be safely installed. “There were a number of minor challenges related to dimensions and slopes, but we were able to work through them,” said Scott Bitikofer, assistant vice president of Facilities Services.

Bitikofer also said that the initial hesitation to put a ramp in place came from the fact that it could restrict access to areas of construction. The new ramp will remain there until the renovation of Mills Memorial Hall is completed, but Bitikofer said there will be times during the renovation of Mills when it will be necessary to remove the ramp to provide access for construction activities.

“In the end, we chose an aluminum ramp that could be removed periodically as is necessary,” said Bitikofer. “We will be working to coordinate the necessary work such that it can be accomplished over the holidays while students are away.”

The final cost of the ramp, installation, and rental was approximately $25,000. This cost is much cheaper than Bitikofer’s original estimate of $100,000, which was based on a more permanent option.

On the larger issue of accessibility, Horton said that the ultimate goal is universal design, “which is that all students and community members will have equal access to physical spaces on campus, as well as academic and co-curricular experiences without the need for accommodations.” Horton said that implementing the new ramp moves Rollins one step closer to that goal.

Though Rollins may not yet be at the point of universal design, Horton said the faculty and staff are devoted to that goal and are working to remove those barriers.

“In regards to physical accessibility on campus, I truly wish every concern could be solved immediately,” said Horton. “While that may not be possible, Accessibility Services will continue to work side-by-side with students to advocate for and support efforts toward true accessibility.”