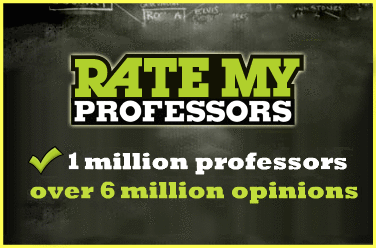 If you’re like me and are procrastinating reading for class by browsing your Facebook news feed, then you probably saw several of your peers re-posting articles from sources such as the Huffington Post featuring mtvU’s “Highest-Rated Professors and Colleges” list for 2013. My news feed was nothing but link after re-shared link of the same list with cutesy taglines for a straight week. Naturally, I was intrigued. It seemed that students were more excited about the ratings given by their peers than the ranking given us by the U.S. News & World Report, in which Rollins tied with Elon University for number one in the south. Maybe it’s because we feel like we actually had some control over the results, and that we were placed on the list with prestigious schools such as Vanderbilt, Duke, and Stanford.

For those of you who aren’t familiar with RateMyProfessor.com, it’s one of the largest online sites for college professor ratings. Featuring 8,000 schools and over 1.8 million professors from around the world, feedback is entirely student-generated. Categories include Top 25 University Professors, Top 25 Universities, and the ever-popular Top 10 Hottest Professors. Students rate their professors based on course difficulty level, clarity of the professor, and helpfulness. A lone chili pepper (or lack thereof) indicates whether the professor is “hot” or “not”.

Rollins ranked 8 out of 25 in the top 25 universities category, boasting an overall campus rating of 4.6 out of 5 and an average professor rating of 3.86 out of 5. But how fair are these ratings when comparing institutions of differing size? In 2011-2012, smaller institutions and private schools populated the Top Universities list. Larger institutions and state schools, such as the University of Michigan, dominated this year’s list. Jeff Urbanski, MTV Communications Manager states, “school size does not affect the outcome of the lists, nor does it give professors from larger schools an advantage over their corollaries from smaller schools. RateMyProfessors.com performed a regression analysis on school size vs. number of ratings and found no noteworthy correlation.”

So maybe the ratings are fair when weighing them against other schools, but how helpful are they when deciding to take a course or not? The ratings are not objective, and may be coming from a student who is looking to blow off some steam due to a poor grade. I would much rather form opinions of a professor myself than base one off of anonymous reviews, whether they are positive or negative. My advice: use these ratings as a jumping-off point, but certainly not as a main determinant in whether you sign up for a class.