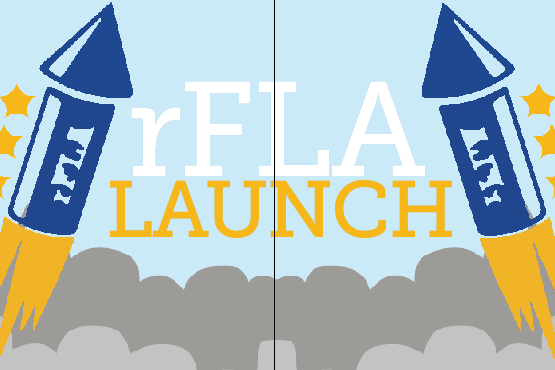 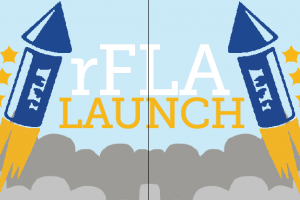 The day had finally come for freshmen students to take part in the Rollins Foundations in the Liberal Arts (rFLA) competitive events launch. Outside, in front of the flagpole, there was a plethora of tables full of free food, various mini-giveaways, and an assortment of shirts for the competitors.

It was a cool day with lots of sunshine, and the stage on Mills was set perfectly for the Neighborhood Idol, set to showcase the musical talents of various Rollins freshmen. There was an hour’s worth of varied talent and the crowd cheered the students’ great pride for their respective neighborhoods and the skills of those onstage. One professor evaluated the performances as both stunning and surprising and remarked that she was delighted about the turnout in support of her students.
Not too long after the Neighborhood Idol, a non-competitive event took place on the lawn of Bush, right across the crosswalk. A large number of neighborhood participants took a break from a week of classes and the competitive atmosphere to focus on their ‘upward dogs’ and more advanced yoga positions—all under the same beautiful sunshine on the stage of Mills Lawn.
Beyond the center of campus in the Bush Auditorium, Trivia Crack was led by an assortment of Neighborhood Coordinators and Dr. Boles. Before the action, vigor, and excitement common in trivia, there was an initial elimination round. Consisting of four students, the teams are based off of the neighborhoods that the students are in. They had about 87 questions to answer in 30 minutes. The teams had no preparation for the rounds; they had to use common knowledge to answer the trivia questions, essentially like any other trivia game. The pre-test round started with seven teams—the ones with the least amount of right answers was eliminated—and the six remaining teams moved forward to the two semi-final rounds, competing based on their rankings as the top three and bottom three. Participating student Sam Sadeh ’18, of Mysteries and Marvels, remarked that this specific competition was fun. “I think this is the type of activity that is open to a lot of people,” he said. “Your major can be whatever, your background can be whatever, and everyone has had different experiences, [which means] everyone can contribute in some type of way. So that’s why I think this is a really good activity to have for the launch fair.”
Although there was a range of question ’categories’ or types, most of the questions centered on popular culture and Rollins, to which the students could relate contextually. Sadeh also explained that he enjoyed working with his team and that their great strategy helped to propel them in the final round: better to skip one question and get it wrong and get five than to miss five and get one right.
Cyrus Bonyadi ’18, also of Mysteries and Marvels, discussed some aspects of the Robot Games that also took place in Bush, in which students had a Lego building and programming competition; a TrashBot had to be programmed, capable of being maneuvered through a course. Drones were also built and flown. Bonyatti also humorously remarked how the President’s drone came pretty close to his face.
The Poetry Slam had a great turnout and students from all around campus, besides freshmen, came together as an intimate group in Dave’s Downunder to read original poetry and recite works of favorite renowned poets, including Walt Whitman and Shel Silverstein. There were laughs and a chorus of snaps and clapping as each reader interpreted works in a moving way, and shared more humorous ones. Faculty and staff also participated. The atmosphere was full of positive energy and, like the yoga event, it was noncompetitive.
The Sidewalk Chalk competition showcased the visual artistic abilities of the students. The winner’s best work applied the theme around their neighborhood to their art.
The athletic aspects in the Alfond Sports Center consisted of volleyball, and less active free throw contest. At the Fred Stone Theatre, students learned firsthand from the Rollins Improv Players the ins and outs of improvisation before they put on a show themselves for the Neighborhood Tag . All in all, the event brought together a large group of the Rollins community and allowed for a great launch to the new curriculum.